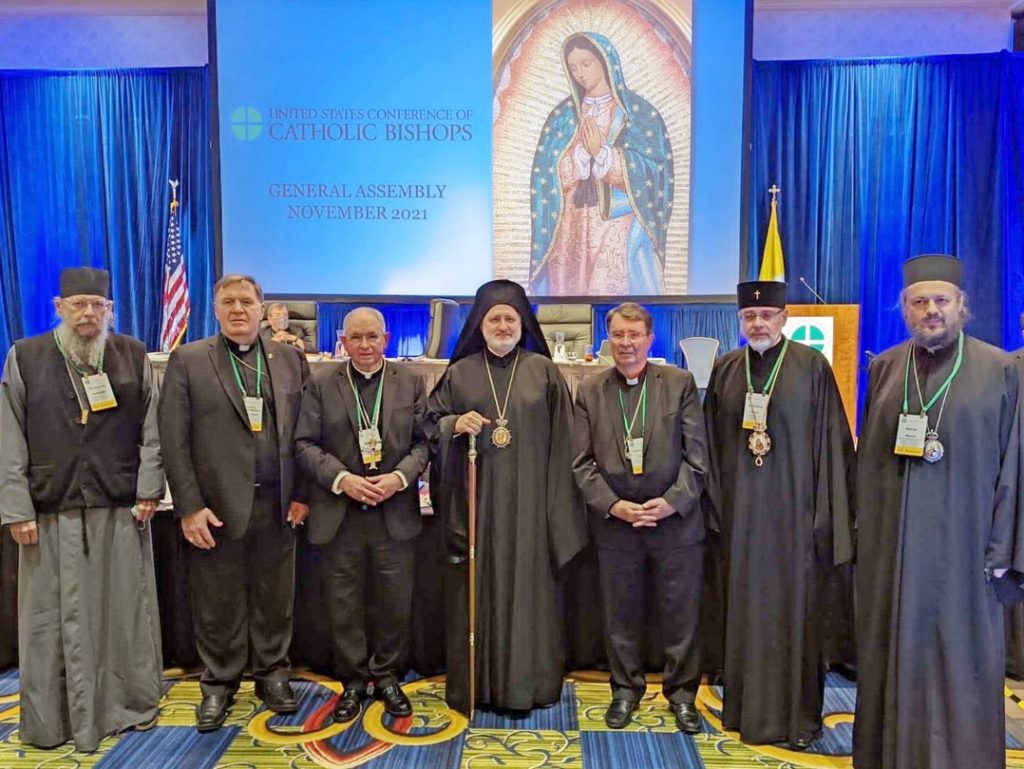 Representatives of the Assembly of Bishops USA with bishops of the United States Conference of Catholic Bishops.

BALTIMORE – At the invitation of His Excellency Archbishop José H. Gomez, President of the United States Conference of Catholic Bishops (“USCCB”), His Eminence Archbishop Elpidophoros of America, chairman of the Assembly of Canonical Orthodox Bishops of the USA, led a delegation to and presented remarks during the USCCB’s November General Assembly. This marks the first time in the history of USCCB that Orthodox hierarchs have participated in their plenary session. Introducing Archbishop Elpidophoros, Bishop David P. Talley, chair of the Bishops’ Committee on Ecumenical and Interreligious Affairs, declared: “Unitatis Redintegratio, the decree on ecumenism of the Second Vatican Council, states that Orthodox Christians ‘are linked with us in closest intimacy.’ Discerning the importance of demonstrating this intimacy, the bishops from the USCCB on the dialogue recommended that we invite representatives of the Assembly of Canonical Orthodox Bishops of the United States to join us at our General Assembly.”

Particularly moved by the warm welcome, Archbishop Elpidophoros opened his remarks by saying, “I greet you with a salutation of hope and peace in our Lord God and Savior Jesus Christ. I would like to share my heartfelt joy to be with you today, my brother bishops of the USCCB, for the first time in the history of our Sister Churches’ relation in this country.” Reflecting on decades of rapprochement between the Roman Catholic and the Orthodox Churches, he also mentioned the current reflection undertaken by the Roman Catholic Church with regard to synodality. In closing, he declared: “I am convinced that the future and mission of Catholic-Orthodox relations in the U.S.A. is to continue to bear witness to God’s presence in the world, faithful to the Spirit of Jerusalem that we received as a legacy.” 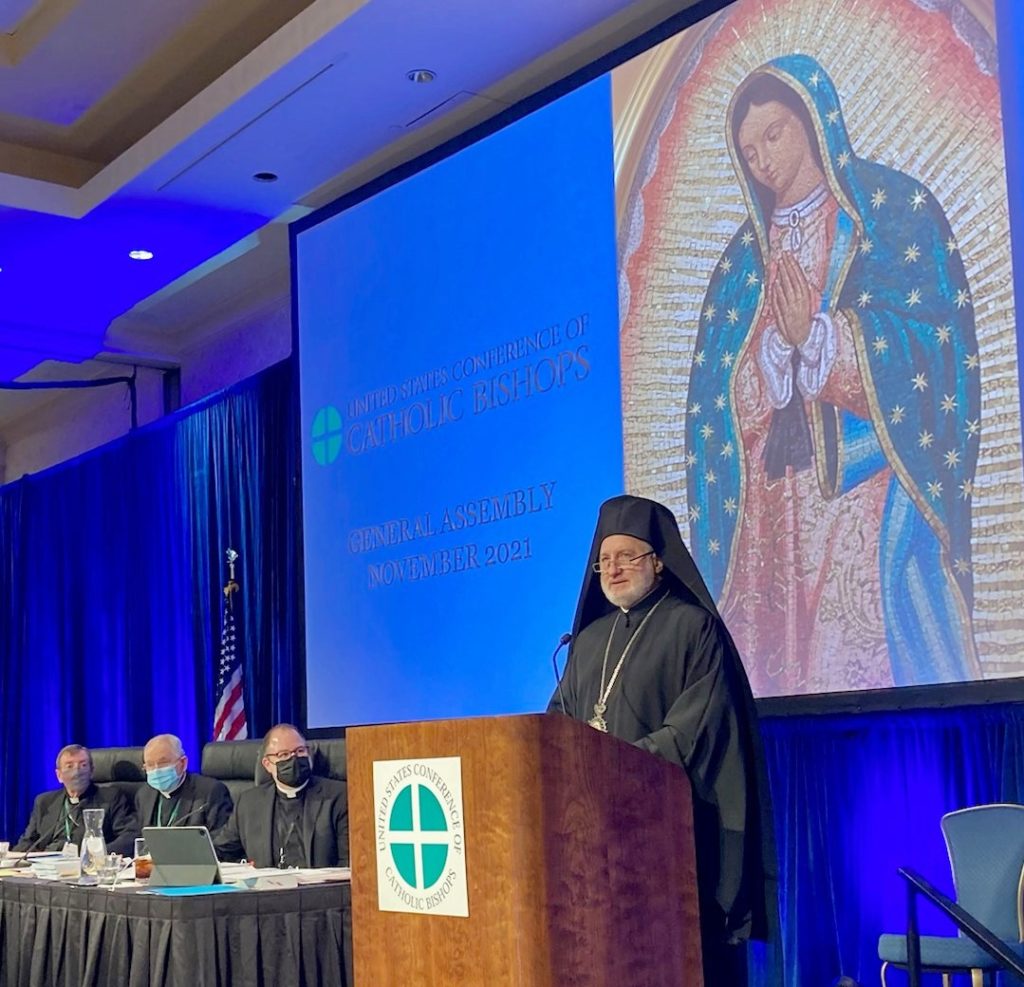 Archbishop Elpidophoros addressing the US Conference of Catholic Bishops

Your Eminences,
Your Excellencies,
Dear Brothers in the Lord,

I greet you with a salutation of hope and peace in our Lord God and Savior Jesus Christ. I would like to share my heartfelt joy to be with you today, my brother bishops of the USCCB, for the first time in the history of our Sister Churches’ relation in this country; I am very grateful to His Excellency, the Most Reverend José H. Gomez Archbishop of Los Angeles, USCCB President, for his fraternal invitation to offer my humble remarks at the end of this session, but also to His Excellency to the Most Reverend David Talley Bishop of Memphis, Chairman of the Bishops’ Committee on Ecumenical and Interreligious Affairs, for facilitating our presence tonight.

As you are well aware, a few weeks ago we had the honor and blessing to welcome His All-Holiness Ecumenical Patriarch Bartholomew for a historic visit to this country during which he met some of you either in Washington, DC or in New York City. I wanted to take this opportunity to thank you again for your warm and ecumenical presence. Allow me to share with you today a quotation from the remarks offered by His All-Holiness during the Ecumenical Reception to the National Council of Churches that finds a particular echo in today’s gathering: “the future of the ecumenical movement resides in ‘the dialogue of love’ through the creation of new symbols and common actions. We need to open our hearts to the language of dialogue. This is the ultimate condition for the restoration of unity among Christians. The 20th century was a time for growing restoration of relationships. The 21st century should become the century of the restoration of unity.”

Today, I am convinced, as I present myself in front of my brother hierarchs, that this dialogue of love, initiated by Pope Paul VI and Ecumenical Patriarch Athenagoras in 1964 in Jerusalem, continues with a particular density in this blessed country.

Our dialogue of love should be fashioned by the dialogue and inspiring relationship between our primates: His Holiness Pope Francis and His All-Holiness Ecumenical Patriarch Bartholomew. Ecumenical Patriarch Bartholomew was the first Archbishop of Constantinople to attend a Pope’s enthronement in 2013. They both share the same concern for the protection of the natural environment, as expressed recently this September in the joint statement published together with the Archbishop of Canterbury, Justin Welby, warning the world of the urgency of environmental sustainability and its impact on poverty.

This dialogue of love between our Sister Churches is a clear manifestation of our common desire for unity and communion on both a global and local level. Thus, the North American Orthodox-Catholic Theological Consultation should not be shy about its accomplishments. Since 1965 – at the happy coincidence of the reestablishment of Catholic-Orthodox relations and the Second Vatican Council – this Consultation has produced thirty-two documents, reports, and statements. Some of them became real references for theologians, and for our Churches to walk together towards unity.

These are real fruits of our collaboration which nourish both our communities. For all these decades, whether it was the Committee for Ecumenical Relations of the Assembly of Canonical Orthodox Bishops of the United States of America – or prior to 2010, the Standing Conference of the Canonical Orthodox Bishops in the Americas, the United States Conference of Catholic Bishops’ Committee for Ecumenical and Interreligious Affairs, and the Canadian Conference of Catholic Bishops have been mutual sojourners. And here, please allow me to commend the two co-chairs of the Consultation, His Eminence Cardinal Joseph W. Tobin of Newark and His Eminence Metropolitan Methodios of Boston, for their inspiring leadership.

It is also worth noting that the Consultation works hand-in-hand with the Joint Committee of Orthodox and Catholic Bishops, which has been meeting annually since 1981. I am happy to report that both bodies are scheduled to continue their work in May of next year at the St. Methodios Faith and Heritage Center in New Hampshire. Let me also note that the fruits of this dialogue are not restricted to theological debate.

Dear Brothers in the Lord:

As Orthodox Christians, we are also very interested in the work and the process of the next Catholic Synod of Bishops, which is scheduled for October 2023 and which will deal with “For a Synodal Church Community: Communion, Participation and Missions.” During this two-year period, I believe that there is room for your ecumenical partners to provide input into the preparation process. This idea was recently shared by His Eminence Cardinal Kurt Koch, president of the Pontifical Council for Promoting Christian Unity[1].

I am convinced that the future and mission of Catholic-Orthodox relations in the U.S.A. is to continue to bear witness to God’s presence in the world, faithful to the Spirit of Jerusalem that we received as a legacy.

Ecumenical dialogue bears in itself a synodal dimension that explores the meaning and praxis of the very nature of the Church structure and mission. We know that international dialogue is already examining this issue through study of the interdependence between synodality and primacy. But perhaps, in our American context, as we dedicate our energy and time to sharing this important issue and reflecting together, it will bear fruit in due course.

I want to thank each one of you for allowing me to address this honorable body with the sincere hope there will be many more opportunities to come together as brothers. As David says it in the Psalms: “Behold, how good and pleasant it is when brothers dwell in unity.” (Psalms 133:1)