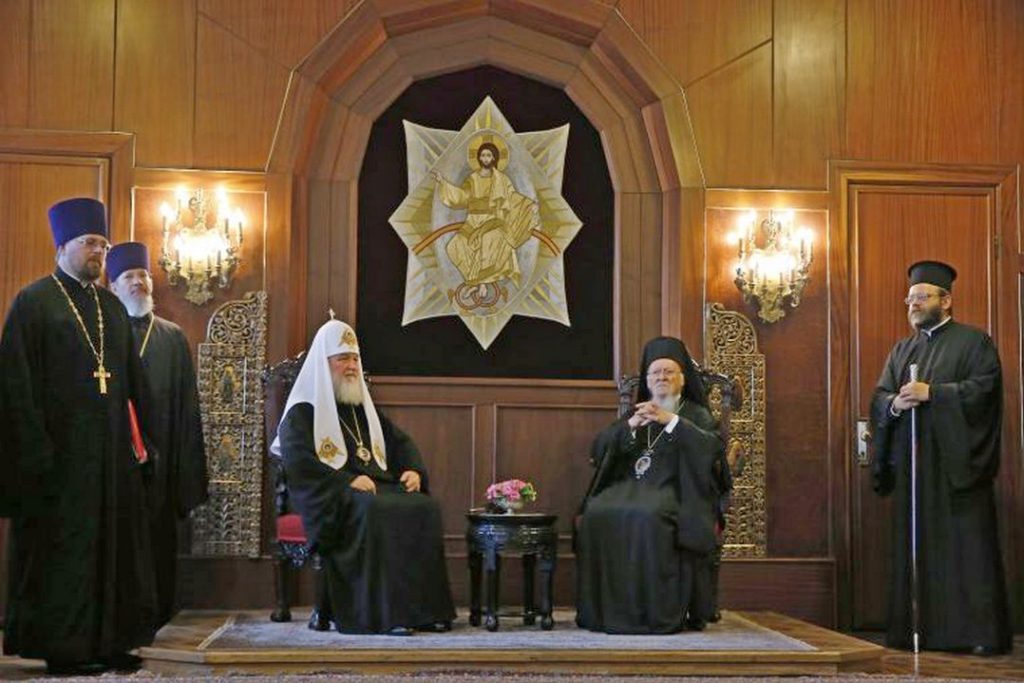 Ecumenical Patriarch Bartholomew, right, the spiritual leader of the world’s Orthodox Christians, sits with Patriarch Kirill of Moscow, left, prior to their meeting at the Patriarchate in Constantinople, Friday, Aug. 31, 2018. (AP Photo/Lefteris Pitarakis)

CONSTANTINOPLE – Ecumenical Patriarch Bartholomew sent a two-member Exarchy to Ukraine to pave the way and do all the necessary proceedings for the granting of Autocephaly status to that country’s Orthodox Church.

High ranking officials in the Moscow Patriarchate have reacted very strongly to this Autocephaly, through numerous announcements and interviews, deeming it a schism in the Orthodox Church, an interruption of Eucharistic communion within the Patriarchate.

Specifically in a September 8 statement, the Moscow Patriarchate stated that “the Holy Synod of the Russian Orthodox Church expresses its resolute protest against and deep indignation at the communique published on September 7, 2018, by the Chief Secretariat of the Patriarchate of Constantinople Holy Synod announcing the appointment of two hierarchs of this Church – Archbishop Daniel of Pamphilon (USA) and Bishop Hilarion of Edmonton (Canada) as ‘exarchs’ of the Patriarchate of Constantinople for Kiev.

“This decision has been adopted without an agreement with Patriarch Kirill of Moscow and All Russia and Metropolitan Onufry of Kiev and All Ukraine and has constituted a gross violation of the church canons prohibiting bishops of one Local Church to interfere in the internal life and affairs of another Local Church (Second Ecumenical Council Canon 2; Council of Trullo Canon 20; Council of Antioch Canon 13; and Council of Sardica Canons 3, 11 and 12). It entirely contradicts the up-until-now invariable position of the Patriarchate of Constantinople and personally Patriarch Bartholomew, who has repeatedly stated that he recognizes His Beatitude Metropolitan Onufry as the only canonical head of the Orthodox Church in Ukraine.

“These actions lead the relations between the Russian Church and the Church of Constantinople to a deadlock and create a real threat to the unity of the whole world Orthodoxy. The reaction of the Moscow Patriarchate will follow at the earliest possible date.”

Metropolitan Hilarion, head of the Moscow Patriarchate’s Department for External Church Relations, said on September 8 that “the Patriarchate of Constantinople announced yesterday that it was sending two exarchs, that is, its special representatives, to Kiev. Today the Holy Synod of the Russian Orthodox Church has made a statement pointing to the unlawfulness of this step. The sending of exarchs (special representatives) or any other representatives to another Local Church can be done only with an agreement of this Local Church. No request whatsoever has been made to either the Patriarch of Constantinople or the Patriarch of Moscow or Metropolitan Onufry, who has been repeatedly recognized publicly by Patriarch Bartholomew as the only canonical head of the Orthodox Church in Ukraine.

Patriarch Bartholomew remains steadfast in the Holy Synod’s decision to proceed in granting the Autocephaly, in order to heal the schism and ecclesiological anomaly that has existed there for a number of years.

Share. Twitter Facebook Pinterest LinkedIn Tumblr Email
Previous ArticleArchpriest Nikolay Balashov: There is a consensus on the principal points of granting autocephaly
Next Article Analysis: A Bold Decision [regarding the Orthodox Church of Ukraine]