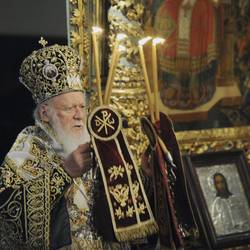 Ecumenical Patriarch Bartholomew I’s messages to Rome on the Feast of St. Andrew the Apostle, were clear: the 264th successor of the 1st Apostle, expressed the hope that Pope Francis’ pontificate would bring “renewed inspiration” to the common journey of the Catholic and Orthodox Churches toward full communion. The meeting between the two religious leaders in Jerusalem expected to take place next spring will be a great chance to begin a new season of ecumenical dialogue, which the Ecumenical Patriarchate considers “especially significant and for many reasons decisive.”

Addressing Cardinal Kurt Koch and other members of the Delegation of the Church of Rome who are in Istanbul for the Feast of St. Andrew, patron saint of the Ecumenical Patriarchate of Constantinople, Bartholomew said he trusted Francis’ election “will constitute a renewed inspiration for the common journey of our two Churches toward the world in order that we may assume social and moral initiatives for the consolation of humanity, which is suffering from diverse global crises.”

Bartholomew expressed his sadness at the fact that the two Churches still do not “[eat]of the same Bread and [drink]of the same Cup” and defined the lack of sacramental communion between Catholics and Orthodox as “the most painful separation of all.” “We consider especially significant and for many reasons decisive the newly commenced period of our dialogue,” Bartholomew went on to say. The Patriarchate therefore “deem[s]it absolutely mandatory to avoid every action and decision, which might be perceived as an impediment in these final days.”

Bartholomew revealed he had already “exchanged ideas and opinions” with Francis “on these matters during [their]encounter in Rome on the day of his installation.” Patriarch Bartholomew referred a number of times to the importance of Francis’ expected visit to Jerusalem in spring 2014 on the occasion of the 50th anniversary of Paul VI’s meeting with Patriarch Athenagoras in the Holy City. This meeting, Bartholomew stressed, “allow[ed]the restoration of peace between them and the commencement of the journey and dialogue of love and truth.”

Bartholomew deliberately drew links between his and Pope Francis’ views on social and cultural emergencies. The Patriarch indicated that he shares Pope Francis’ ideas on the economic crisis, which Bartholomew believes “is the result of people’s estrangement from faith in God and the fulfilment of His commandments,” caused by “greed”, “which is idolatry.”

In his address to the Catholic delegation, Bartholomew also mentioned theological dialogue – which currently focuses on the issues of primacy and authority – as an important instrument in the move towards full sacramental unity. Bartholomew described the division between Christians caused by the “devil’s envy” as an “overturning our faith in the one holy, catholic and apostolic Church of Christ, declared by the Symbol of Faith, the Nicaean-Constantinopolitan Creed.”

Up until now, talks between representatives of Christian communities have mostly taken the form of “monologues where each side presented its own positions and arguments.” But this attempted method of clarifying positions and ideas has not borne any fruit so far. According to Bartholomew, the only way forward, “is to discern the teaching of the Lord and His Apostles, as this was experienced and witnessed by the common Patristic theology of the undivided Church.” In order to proceed along the path of theological dialogue, the two Churches must “[alleviate]any barriers introduced by each side or else by other sources, seeking also the intervention of the recently elected new first-bishop, the honorable and beloved brother Pope Francis.”

In his interview with Italian Jesuit journal Civiltà Cattolica, the Bishop of Rome clearly expressed his intention to “continue the discussion that was begun in 2007 by the joint [Catholic–Orthodox] commission on how to exercise the Petrine primacy, which led to the signing of the Ravenna Document. We must continue on this path.” This document suggested a definition of the primacy role of the Bishop of Rome, which could also be acceptable to both Orthodox Synods.

The Pope and the Patriarch of Constantinople are clearly both keen for theological dialogue to progress. But official representatives of the Patriarchate of Moscow did not sign the Ravenna document and have often shown intolerance towards dialogue over theological and doctrinal issues. They prefer to define the Catholic Church’s relationship with the Patriarchate as an “alliance” when it comes to moral and social issues.