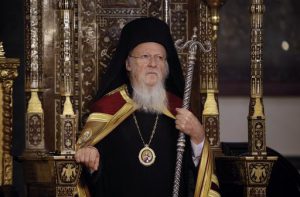 CONSTANTINOPLE – The Holy Synod of the Ecumenical Patriarchate, which was convened at the Phanar on October 4, presided by Ecumenical Patriarch Bartholomew, directed Archbishop Demetrios to submit explanations about the Archdiocese of America’s finances.

The Synod also asked about the List of Candidates for the High Priesthood and specifically about the Metropolis of Chicago, which unless things proceed expeditiously, will not have a new metropolitan in place for Christmas.

The Synod also discussed paideia, given the closings of many parish day schools.

Metropolitan Savas of Pittsburgh, who is Demetrios’ spiritual offspring, attempted to defend him, to no avail. At one point, Patriarch Bartholomew directed Savas to speak slowly and in Greek, as Savas had begun speaking to the Synod in English.

Bartholomew provided a written introduction to the Synod about the Archdiocese’s financial problems as revealed in recent weeks, including the matter of the funds for the St. Nicholas at Ground Zero rebuilding, and recommended that the Synod send the letter to Demetrios requesting an explanation.