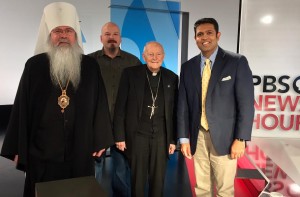 EDITOR’S UPDATE: View the interview with Metropolitan Tikhon and Cardinal Theodore McCarrick that aired on PBS on Friday, February 12, 2016.  The segment begins at 22:58.

BBC’s World News America will air a live interview with Metropolitan Tikhon at 6:15 p.m. Eastern time this evening, while an interview taped earlier today in Washington, DC earlier will air between 6:00 and 7:00 Eastern time tonight as part of its the PBS News Hour.  Check local listings for possible variations in times.

In both interviews, Metropolitan Tikhon will share insights on the historic encounter, including its meaning for Church relations in the United States, its broader historical impact, the persecution of Christians in the Middle East, and prospects for cooperation between the Roman Catholic and Orthodox Christian traditions.  Pope Francis and Patriarch Kirill are expected to sign a joint statement after their two-plus hour private meeting.

In a joint press release issued by the Vatican and the Patriarchate on February 5, the encounter termed the fruit of “a long preparation” as “the first in history” between a Pope and a Patriarch of Moscow, thus marking “an important stage in relations between the two Churches.”  Both the Vatican and the Patriarchate expressed their desire that the meeting “will also be a sign of hope for all people of good will” and issued an invitation to all Christians “to pray fervently for God to bless this meeting, that it may bear good fruits.”

The meeting is being held as Patriarch Kirill begins a visit to Brazil, Chile and Paraguay while Pope Francis visits Mexico.

In related news, His Eminence, Archbishop Alejo of the Orthodox Church in America’s Diocese of Mexico will head the official delegation of Mexico’s Orthodox Christians slated to greet Pope Francis on his arrival in Mexico City.