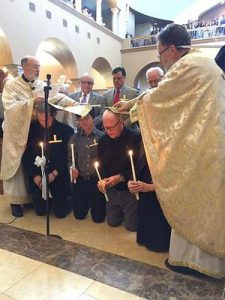 Known to millions as the “Bible Answer Man,” 77-year-old Hank Hanegraaff and his wife were received into the Orthodox Church this year on the great feast of Palm Sunday, at St. Nektarios Greek Orthodox Church in Charlotte, NC.

Mr. Hanegraaff can be seen kneeling with a lit candle under a priest’s epitrachelion in the picture to the right. His wife’s hands can be seen as well. The picture originates from the Facebook page of the parish, but has been removed after an influx of comments, including negative remarks from those who appreciated Hanegraaff’s work as a Protestant.

The Bible Answer Man addressed his conversion to the Orthodox faith on his program yesterday, in response to a caller who had seen remarks claiming that, in becoming Orthodox, Mr. Hanegraaff had left the Christian faith. He responded:

I am now a member of an Orthodox Church, but nothing has changed in my faith. I have been attending an Orthodox church for a long time—for over two years, really, as a result of what happened when I went to China, many years ago. I saw Chinese Christians who were deeply in love with the Lord, and I learned that while they may not have had as much intellectual acumen or knowledge as I did, they had life. And so I learned that while truth matters, life matters more, and I remember flying back from China after spending time with just common people who had a deep, intense love for the Lord, and wondering, “Was I even a Christian?”

I was comparing my ability to communicate truth with their deep and abiding love for the Lord Jesus Christ… One man, by the way, said to me, truth matters but life matters more. In other words, it is not just knowing about Jesus Christ, it is experiencing the Resurrected Christ. As a result of that I started studying what was communicated by the progeny of Watchman Nee with respect to theosis and that drove me back to the early Christian Church.

After reciting the entire Nicene Creed, he concluded, “In other words, I am as deeply committed to championing mere Christianity and the essentials of the historic Christian faith, as I have ever been.”

Hank Hanegraaff has served as the president and chairman of the board of the North Carolina-based Christian Research Institute (CRI) since 1989, when he also took over previous-president’s radio talk-show “The Bible Answer Man.” The show includes answering questions about matters of Christian doctrine and history and Biblical interpretation, and denominational particularities. He has been an outspoken critic of non-Christian religions, new religious movements and cults, and heresies within conservative Christianity. He is also the author of over twenty books. His The Complete Bible Answer Book—Collector’s Edition is a compendium of the most common, and the most difficult, questions regarding Christianity, culture, and cults that Hank has received over the past three decades.

It has been noted that Hank has been speaking about the Orthodox Church more on his show lately, referring to it as “fantastic,” and “the early Church.” In 2016, Hank interviewed Fr. Themistoclos (Adamopoulos), a Greek Orthodox priest, to discuss his journey from Marxist rock star to Orthodox monk. Fr. Themi works tirelessly with the poor and suffering in Sierra Leone, where people are still suffering from the effects of a recent Ebola epidemic. The interview can be listened to here.

In March, Mr. Hanegraaff answered a caller’s question about the Orthodox teaching of theosis, ably explaining the doctrine of man’s sanctification on both a Biblical and Patristic basis. “We become Christ-bearers since His Body and Blood are distributed throughout our limbs, as Cyril of Jerusalem said… The whole idea being that we become by grace what God is by nature… We become, as Peter put it, partakers in the divine nature,” the Bible Answer Man explained. A full video of the call can be seen below: