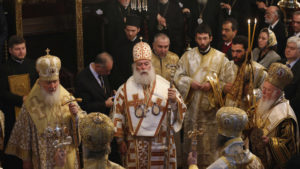 FILE PHOTO: At the invitation of the Constantinople Patriarch, heads of all Orthodox churches meet at the Greek Orthodox Patriarchate in Istanbul, on MArch 9, 2014. Murad Sezer

“A decision about the full break of relations with the Constantinople Patriarchate has been taken at a Synod meeting” that is currently been held in the Belarusian capital of Minsk, Hilarion said, as cited by TASS.

The move comes days after the Synod of the Constantinople Patriarchate decided to eventually grant the so-called autocephaly to the Ukrainian Orthodox Church, thus making the clerical organization, which earlier enjoyed a broad autonomy within the Moscow Patriarchate, fully independent.

At the same time, the Russian Church expressed its hope that “a common sense will prevail” and Constantinople will change its decision. However, it still accused the Ecumenical Patriarch of initiating the “schism.”

The move taken by Moscow marks arguably the greatest split in the history of the Orthodox Church since the Great Schism of 1054, which separated Catholics and Orthodox Christians, as it involves a break of communion between the biggest existing Orthodox Church – the Moscow Patriarchate – and Constantinople Patriarch, who is widely regarded as a spiritual leader of world’s Orthodox Christians, even though his status is nothing like that of the Pope in the Roman Catholic Church.

Constantinople’s decision seems to be serving the interests of the Ukrainian leadership rather than the Orthodox Christians living there. While most Orthodox clerics in Ukraine still pledge loyalty to the head of the Russian church, Patriarch Kirill, and consider themselves to be part of the Russian Orthodox Church, Kiev actively supports a schismatic force, which has been unrecognized by any other Churches until now.

In its October decision, the Holy Synod of the Constantinople Patriarchate “canonically reinstated” Filaret and his followers “to their hierarchical or priestly rank” and restored their communion with the Church, thus effectively declaring that it does not see them as schismatic. This particular move also provoked angry reaction in the Moscow Patriarchate.

“A schism remains a schism. And the leaders of a schism remain as such,” Hilarion said, adding that “a Church that recognized schismatic [priests]and entered into communion with them … excluded itself from the canonical field of the Orthodox Church.”

He also named restitution of Filaret’s and his followers’ hierarchical or priestly ranks as one of the major reasons behind the Russian Orthodox Church Holy Synod’s decision to break all ties with Constantinople.

According to TASS, 40 churches have been forcefully seized by the Kiev Patriarchate between 2014 and 2016. In the first half of 2018 alone, Ukraine witnessed 10 new attacks on Russian Orthodox Churches. Now, as Constantinople is launched a procedure of granting independence to the Ukrainian Orthodox Church, such attacks might further intensify, some experts warn.