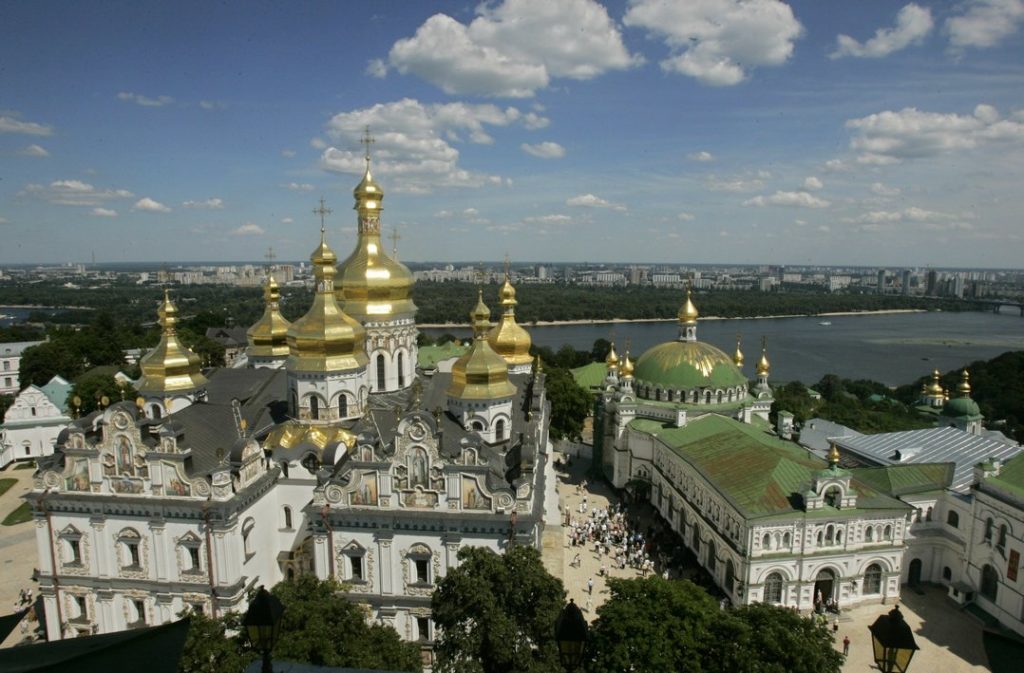 In this Sunday, July 27, 2008 file photo, The thousand-year-old Monastery of Caves, the holiest site of Eastern Orthodox Christians, against the background of the Dnipro River, in Kiev, Ukraine. Tensions over the imminent formation of a Ukrainian Orthodox church independent of Moscow are raising fears that nationalists may try to seize Russian church properties. (AP Photo/Efrem Lukatsky, FILE)

KIEV, Ukraine (AP) — The rough-looking young men brought clubs and brass knuckles to the Pechersk Monastery in Kiev , one of Orthodox Christianity’s most important pilgrimage sites, apparently seeking to disrupt worship. Police spread-eagled them against a wall decorated in faded centuries-old frescos of solemn saints, then hauled them away.

On the other side of the dispute, at a small church in the center of Kiev, a dozen men organized round-the-clock guard duty, worried that nationalist radicals might make their third attempt in a year to seize the place of worship. 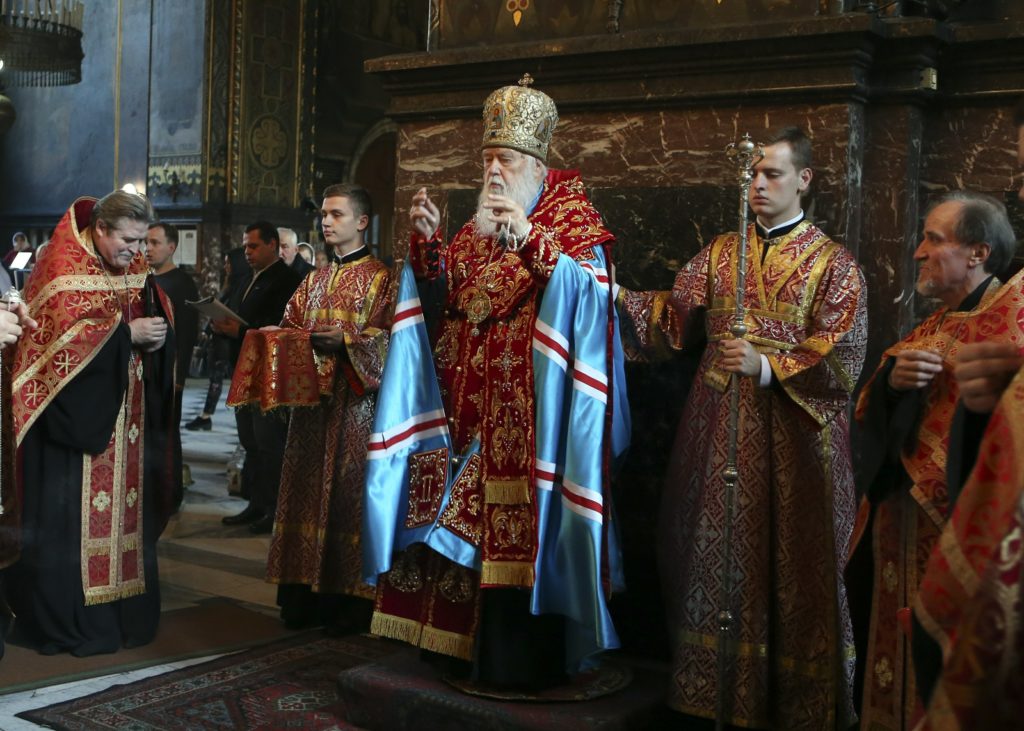 In this Thursday Oct. 11, 2018 file photo, Patriarch Filaret, head of the Ukrainian Orthodox Church of the Kiev Patriarchate, conducts a service at the Volodymysky Cathedral in Kiev, Ukraine. Tensions over the imminent formation of a Ukrainian Orthodox church independent of Moscow are raising fears that nationalists may try to seize Russian church properties. (AP Photo/Efrem Lukatsky, FILE)

The incidents a week ago underline the tensions in Ukraine as it prepares to establish a full-fledged Orthodox church of its own. The planned religious rupture from the Russian Orthodox Church is a potent — possibly explosive — mix of politics, religious faith and national identity.

The imminent creation of the new Ukrainian church raises deep concerns about what will happen to the approximately 12,000 churches in Ukraine that are now under the Moscow Patriarchate. 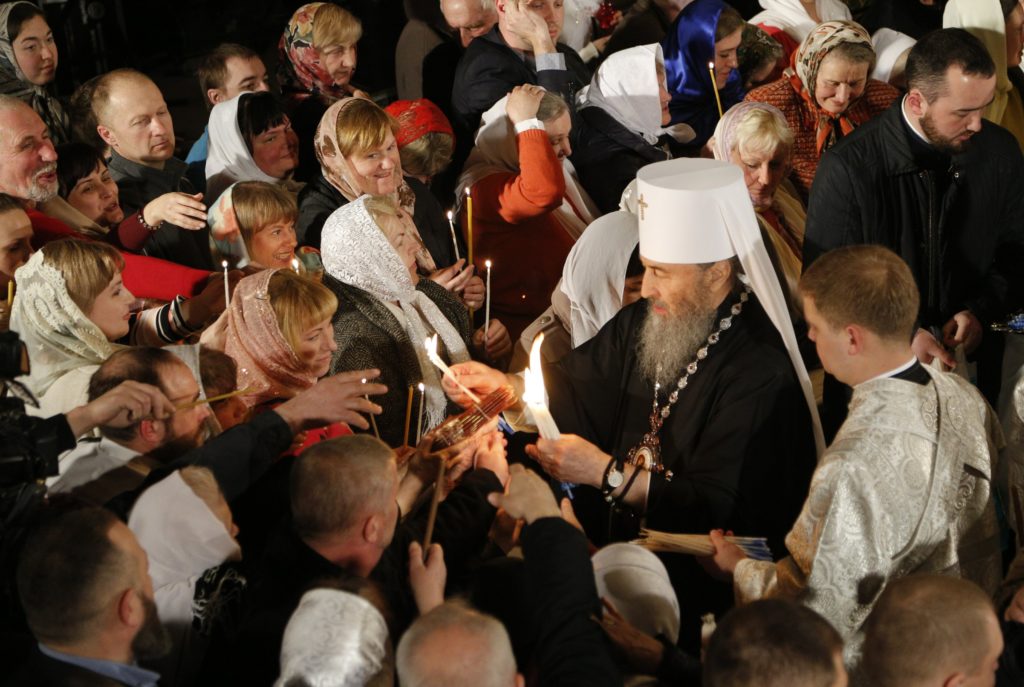 In this photo taken Saturday, April 7, 2018 head of the Ukrainian Orthodox Church under the Moscow Patriarchate, Metropolitan Onuphrius, lights believers’ candles with fire which was delivered to the Ukrainian capital from the Church of the Holy Sepulcher in Jerusalem’s Old City, traditionally believed to be the burial place of Jesus Christ, after the ceremony of the Holy Fire, during the Easter service in the Monastery of Caves in Kiev, Ukraine. Tensions over the imminent formation of a Ukrainian Orthodox church independent of Moscow are raising fears that nationalists will try to seize Russian church properties. (AP Photo/Efrem Lukatsky, FILE)

“The question of what will happen to the property of the Orthodox churches existing in Ukraine after the emergence of a single local church is key and could be one of the most painful” issues of the Orthodox split, said Volodymyr Fesenko, an analyst at the Ukrainian think-tank Penta.

Since the late 1600s, the Orthodox Church in Ukraine had been a wing of the Russian Orthodox Church rather than ecclesiastically independent — or “autocephalous.” Many Ukrainians chafed at that arrangement, resenting its implication that Ukraine was a vassal state of Russia. 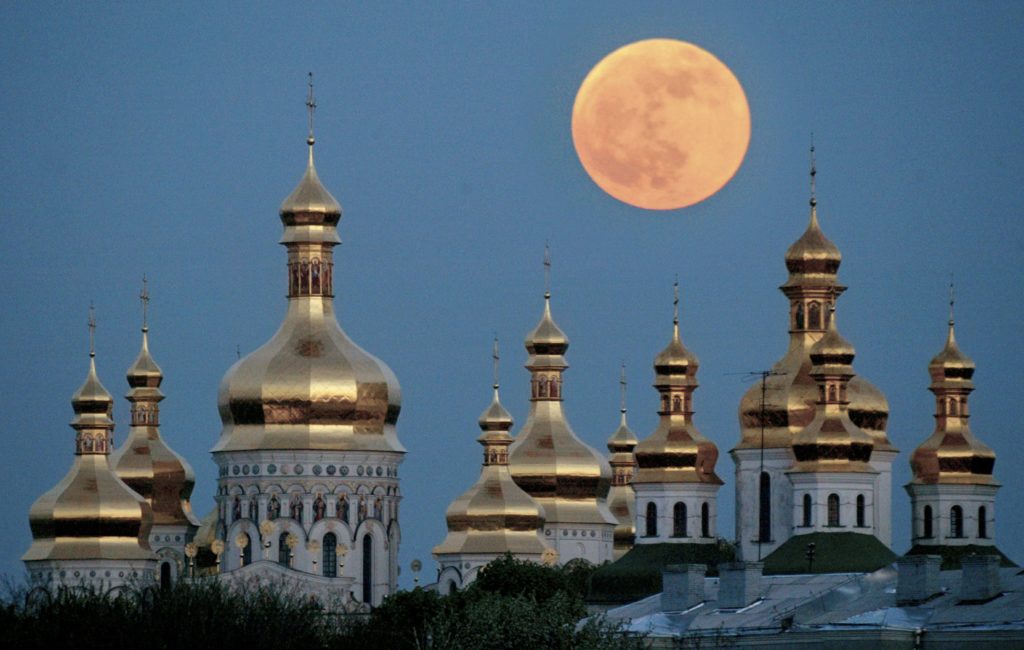 In this May 4, 2004 file photo, a full moon rises above the golden domes of the Orthodox Monastery of the Caves in Kiev, Ukraine. Tensions over the imminent formation of a Ukrainian Orthodox church independent of Moscow are raising fears that nationalists will try to seize Russian church properties.(AP Photo/Efrem Lukatsky, File)

Schismatic churches formed under their own Ukrainian leaders, but they were not recognized as canonical by the Ecumenical Patriarch of Constantinople, the so-called “first among equals” of leaders of the world’s Orthodox Churches.

That is about to change.

The Russian Orthodox Church, furious at the move, announced it would no longer recognize the authority of the Ecumenical Patriarch. It also fears it will lose deeply cherished sites including the Pechersk Monastery, the seat of the church’s Ukrainian branch and a major tourist destination renowned for its richly decorated churches and labyrinthine caves holding the relics of holy men.

It’s not exactly clear when the autocephaly will be formally granted. The two schismatic Ukrainian churches must meet to decide who will be the patriarch of the unified church. Once that decision is made, Constantinople is expected to grant the independence order.

In recent years, about 50 churches in Ukraine that were under the Moscow Patriarchate have been forcibly seized and transferred to the Kiev Patriarchate, according to Metropolitan Antony Pakanich of the Moscow-loyal Ukrainian Church.

“People have been forcibly dragged out of our temples, the locks have been sawed off,” he told The Associated Press. “People in camouflage and balaclavas, with insignia of radical organizations, have come and beat our believers and priests.”

Some believers say they will forcefully defend their right to stay.

“The creation of a local church will push for a new round of confrontation … we, who are supporters of canonical Orthodoxy, will defend our interests here,” said Ilya Bogoslovsky, a 28-year-old who came with his wife and daughter for a service at the chapel of the Tithes Monastery, where the guards had been deployed. 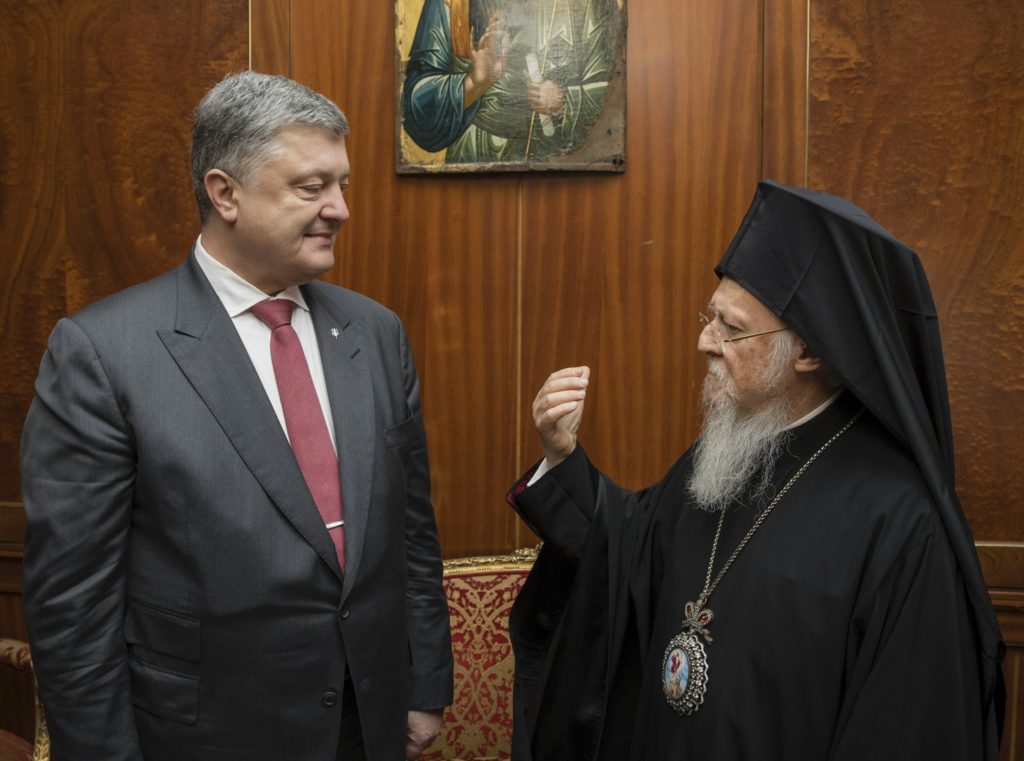 Ukrainian President Petro Poroshenko, who has hailed the creation of the full Ukrainian church as “a guarantee of our spiritual freedom,” has pledged that there will be no action taken against parishes that choose to remain under the Moscow Patriarchate.

Similar promises have come from Patriarch Filaret, head of the largest of the schismatic Ukrainian Orthodox churches, who said “creating a single Orthodox Church in Ukraine does not mean that the Russian Orthodox Church does not have the right to exist on our territory.”

But some Ukrainian nationalists appear ready to use force. In September, radical right-wingers broke into a church in western Ukraine, beat up a priest, drove parishioners away and locked the building.

A leader of the ultranationalist C14 group, whose adherents have twice attacked the Tithes church in Kiev, sees the presence of Moscow Patriarchate churches in Ukraine as a form of propaganda by an “aggressor country” since the Russian Orthodox Church has close ties with the Kremlin. 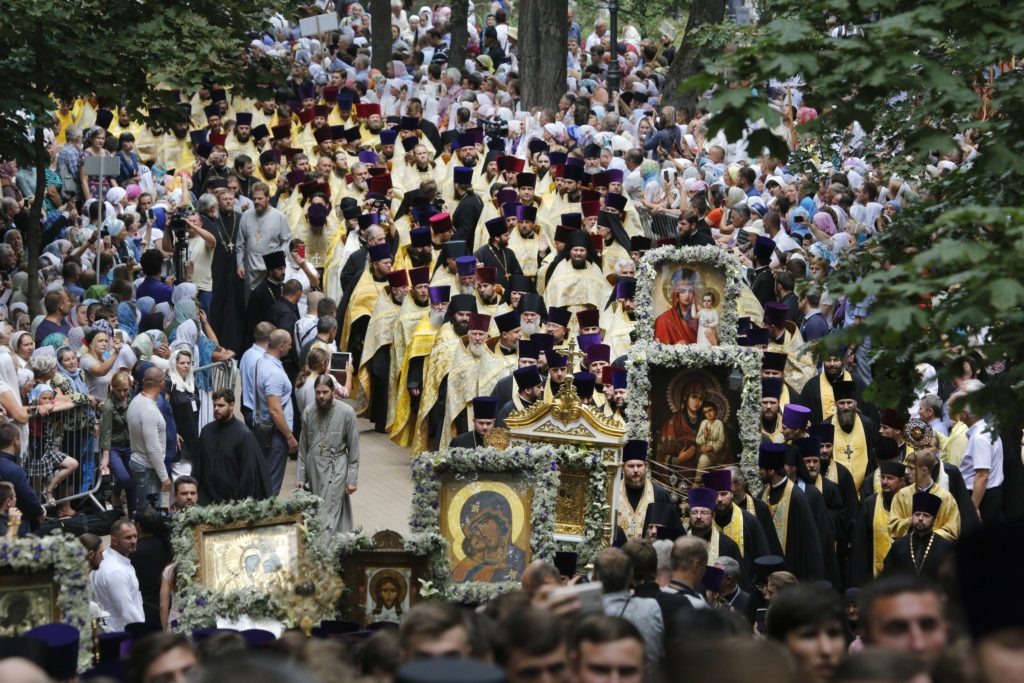 In this July 27, 2017 file photo, orthodox believers and clergymen march to prayer in Kiev, Ukraine, Thursday, July 27, 2017, in observance of the holiday marking the adoption of Christianity by what is now Russia and Ukraine in the 10th century. Tensions over the imminent formation of a Ukrainian Orthodox church independent of Moscow are raising fears that nationalists may try to seize Russian church properties. (AP Photo/Efrem Lukatsky)

The war between Ukrainian government forces and Russia-backed separatists in eastern Ukraine, which began in 2014 and has killed at least 10,000 people, has also sharply increased the hostility toward the Moscow Patriarchate churches.

Father Sergii Dmitriev, a chaplain in the Ukrainian army, was once part of the Moscow church but switched to the Kiev Patriarchate after the Russia-linked church began to refuse holding funerals for Ukrainian soldiers killed in the war.

“To be in the Moscow Patriarchate is to take part in the murder of Ukrainians,” he told the AP. “Not only those who pull the trigger are responsible, but those who bless the pulling of the trigger.”

With such passions on both sides, the cleric feared that more violence between the two uneasy neighbors lay ahead.

“The birth of a new Ukrainian church is taking place amid throes for which everyone should be prepared,” he warned.