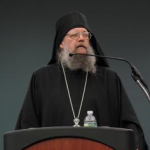 Twenty-two graduates from Saint Vladimir’s Seminary have “gone forth” (Matthew 28:19) to serve the Church as priests, deacons, and lay ministers—including choral conductors, scholars, and hospital chaplains.  At Commencement Exercises held on Saturday, May 19, 2012, the seminary awarded diplomas in three programs: two Masters of Theology, 16 Masters of Divinity, and four Masters of Arts degrees were conferred. Graduates represented a broad range of ecclesial jurisdictions and included both Eastern and Oriental Orthodox Christians; 13 of the graduates were from the Orthodox Church in America (OCA).  Additionally, 12 of the 22 graduates already had been ordained to Holy Orders.

His Beatitude, Metropolitan Jonah, who is President of the Seminary and Chair of the Board of Trustees, opened the Commencement Exercises and conferred degrees upon the graduates. In his closing remarks, he encouraged the senior class to “bear the Good News with joy,” to “practice asceticism with a smile,” and to “remember always that you bear the responsibility for building up the Church and the seminary.”
SVOTS CommencementBishop Alexander delivers the Commencement Address

His Grace, the Right Rev. Dr. Alexander [Golitzin], newly ordained Bishop of Toledo and the Bulgarian Diocese (OCA), and a seminary alumnus and former adjunct faculty member at Saint Vladimir’s, delivered the Commencement Address to the Class of 2012. He spoke on the theme of priesthood, distinguishing between the sacramental and royal priesthoods. Bishop Alexander noted that an ordained clergyman has the “peculiar” role to “occupy the place of the High Priest [Jesus Christ]…and to offer himself up and give himself back to his people, his flock, as food and drink.” Similarly, he said, lay scholars of theology have the duty to present Christ to the broader world by becoming “‘iconographers for the intellect’…constructing images of Christ that will reveal and make Him present to others.”

Read the entire story and view photo galleries on the seminary website.