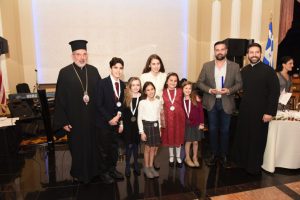 FILE – His Grace Bishop Andonios of Phasiane during the awards ceremony of the dances. Deacon Panagiotis Papazafiropoulos smiles full of happiness for the huge success of the “Paradosi” dances.

NEW YORK – His Grace Bishop Andonios of Phasiane, Chancellor of the Greek Orthodox Archdiocese of America will take a medical leave, as was announced at the Archdiocese in a meeting on September 26.

TNH has learned that Bishop Andonios will undergo some type of surgical procedure at the end of the month and will recuperate at home for a few weeks.

Some in the Archdiocese, though, allege that his taking a leave now is a golden opportunity for him to distance himself from the Archdiocese’s looming bankruptcy.

Andonios has assumed some additional weighty responsibilities as of late, given the recent ouster of Executive Director of Administration Jerry Dimitriou. He has also assumed the responsibility of terminating employees due to budget cuts on an almost daily basis – approximately 18 full-time and 12 part-time to this point.

He also has responsibility of care of the Direct Archdiocesan District, priests under psychiatric care, and he is also the General Director of the St. Michael’s Home for the Aged.

Bishop Andonios did not respond to TNH’s request for comment.