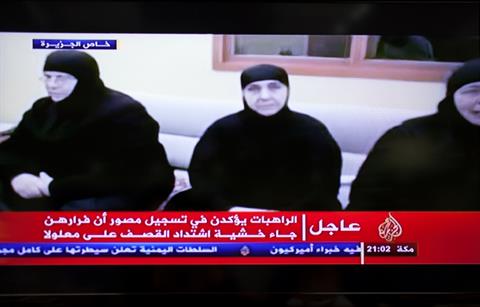 The nuns said in the video released by Al-Jazeera that fierce shelling had forced them to leave the convent.(The Daily Star/Al-Jazeera TV)

BEIRUT: A senior Orthodox Church official has urged Christians to take up arms to defend themselves and their holy places in the wake of the seizure of a group of nuns from the ancient village of Maaloula.

Speaking to the Iraqi newspaper Az-Zaman, Bishop Luca al-Khoury said “we have many young men who are asking us [to take action], and there are those demanding that we take immediate action.”

“I call on every young man who can take up arms to come forward,” Khoury said, adding that the initiative was meant to allow the community’s members to engage in self-defense and protect Christian holy places, which have come under attack recently.

“Our young people are ready; their fingers are on the trigger and they’re ready to fight for the sake of Syria and for the sake of self-defense,” said Khoury, the patriarchal assistant at the Antioch Diocese, based in Damascus.

Asked about the 13 nuns and several orphanage workers who were seized last week and spirited away from Maaloula to the nearby town of Yabroud, Khoury indicated they were unable to discuss their situation freely:

“As they said, they’re in the home of a neighbor. And when you’re in a neighbor’s home, you can only communicate when the neighbor wants you to.”

The women appeared in video footage broadcast Friday by Al-Jazeera television and said they were being treated well after being forced to leave Maaloula due to heavy shelling. Pro-opposition sources deny that the women were kidnapped.

Khoury said that some 40 churches had been damaged during the war in Syria and blamed the international community for accepting the opposition’s version of events, “which is that the regime is killing its people – they are seeing things with only eye.”

Khoury urged leading countries to instead make efforts to stop the flow of weapons into the country.

In Lebanon, caretaker Energy Minister Gebran Bassil said the events in Maaloula, where the regime and rebels have been locked in a fierce campaign for the last several weeks, were having an impact on Christians in Lebanon and the rest of the world.

Bassil told a news conference that it was time to act in order to halt “the series of attacks on Christians.”

“Reactions in Lebanon, the Levant and the world haven’t been sufficient,” Bassil said, adding that a similar disappointing response followed the kidnapping of two Orthodox bishops in April.

The minister proposed both prayer and large-scale peaceful demonstrations to express outrage over the targeting of Christians in the war in Syria.

A version of this article appeared in the print edition of The Daily Star on December 09, 2013, on page 8.