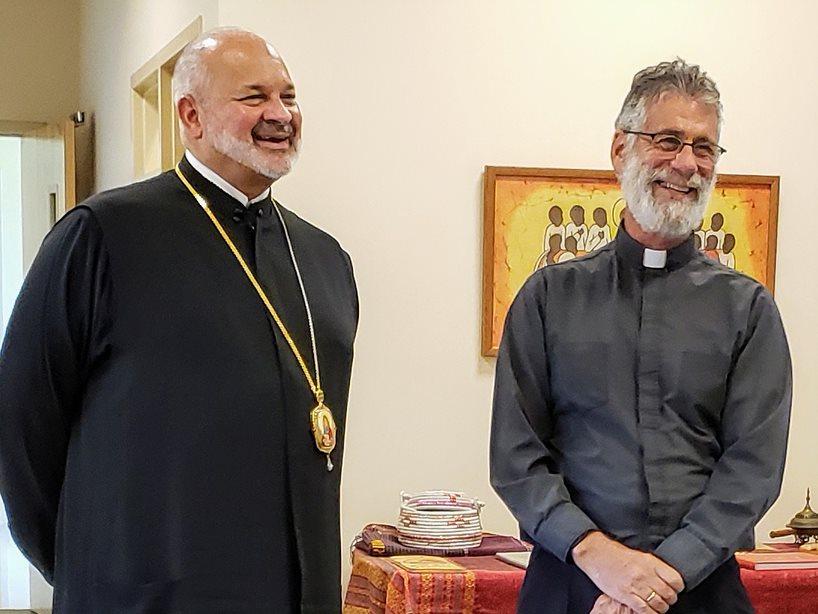 Saint Augustine, Fla. –   Bishop Demetrios of Mokissos visited Saint Augustine, Florida, the week of September 30—October 4, as he began his new ministry as the Hierarchal Proistamenos of the Saint Photios Greek Orthodox National Shrine, as well as Synodal Liaison of the Assembly of Canonical Orthodox Bishops in the USA to the Orthodox Christian Mission Center (OCMC) also headquartered in Saint Augustine.

During the week Bishop Demetrios toured the Saint Photios Shrine, an institution of the Greek Orthodox Archdiocese of America dedicated to the first colony of Greeks who came to America in 1768, and met with members of the staff and Board, discussing ways the Shrine can play a more visible and active role in the ministry of the Archdiocese of America.  Likewise, he toured the facilities of the OCMC, the official missions agency of the Assembly of Canonical Orthodox Bishops of the United States, and met with his former schoolmate and OCMC Executive Director Father Martin Ritsi.

Additionally, Bishop Demetrios represented His Eminence Archbishop Elpidophoros of America at the funeral here on October 2 of the retired Roman Catholic Bishop of Saint Augustine, John J. Snyder, who was present with former Archbishop Iakovos of blessed memory at the ribbon-cutting opening ceremony for the Saint Photios National Shrine in 1982.

“I am thankful for the gracious reception of new friends and colleagues here in Florida,” Bishop Demetrios stated, “and also look forward to working with them.  I am also excited for the ministry initiative to serve those whose primary language is Spanish assigned to me by His Eminence Archbishop Elpidophoros. This is an opportunity for us as a Church, for not only must we reach out in mission to all persons according to the Great Commission, including Hispanics and Latinos living in our communities, but also to serve better those of Hispanic backgrounds already worshipping in our parishes.”

His Eminence Archbishop Elpidophoros of America recently assigned Bishop Demetrios, an auxiliary bishop since 2006, as the Hierarchal Proistamenos of the Saint Photios National Shrine, as well as the Liaison of the Assembly of Canonical Orthodox Bishops in the USA to the OCMC.  Additionally, Archbishop Elpidophoros charged Bishop Demetrios with the organization and development of missionary, social, and philanthropic activities geared towards the Spanish speaking population of the USA.

Bishop Demetrios noted, “My previous ministry was greatly concerned with matters of social justice, seeking to better serve the marginalized of our local, national and international communities.  With this ministry initiative, that experience will be most helpful at this time in the life of our nation.  Already with His Eminence’s blessing, I will soon be presenting an outline and proposal for such a ministry to the Archdiocesan Council. Such a ministry will rely on their same enthusiastic support as shown by His Eminence and will include clergy and faithful throughout our Holy Archdiocese of America.”

Bishop Demetrios of Mokissos, a native of Chicago, was ordained a priest in 1992 and later Bishop in 2006.  During that time he served as Chancellor of the Metropolis of Chicago under Metropolitan Iakovos of blessed memory until 2017.  He has represented both the Metropolis of Chicago and the Archdiocese in numerous ecumenical and inter-faith activities, numerous local and national social justice ministries, and was the founder of the first Orthodox Christian ministry in the United States serving those living with HIV/AIDS (The Bishop’s Task Force On AIDS).