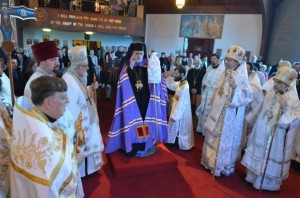 The Rite of Installation, during which His Grace, Bishop Mark [Maymon] was enthroned as Bishop of Philadelphia and Eastern Pennsylvania, was celebrated at the Hierarchical Divine Liturgy at Saint Stephen Cathedral here Saturday, May 10, 2014.

His Beatitude, Metropolitan Tikhon, presided at the Divine Liturgy.  In addition to Bishop Mark, His Eminence, Archbishop Nathaniel of Detroit and the Romanian Episcopate; His Eminence, Archbishop Melchisedek of Pittsburgh and Western Pennsylvania; and His Grace, Bishop Michael of New York and New Jersey, concelebrated.  Eight priests, including Priest Victor Gorodenchuk, Dean of Saint Stephen Cathedral, and three protodeacons also served.  The liturgical responses were rendered by a combined choir of singers from Saint Nicholas Church, Bethlehem, PA and other members of the diocese under the direction of Saint Nicholas Church’s talented director, Reader Nicholas Lezinsky.  Bishop Mark preached at the Divine Liturgy, encouraging the faithful to acquire attributes conducive to a healthy diocese.  “Love comes first in our Church life, and foremost love for Christ,” Bishop Mark said as he called upon the diocese’s clergy and faithful to discern that which is of the Holy Spirit. [Read here for additional details.]

Among the guests attending the Divine Liturgy were representatives of the Roman Catholic Dioceses of Philadelphia and Scranton and the Indian Orthodox Church.

On Friday evening, Great Vespers was celebrated at the cathedral with all four bishops in attendance.  Archbishop Nathaniel delivered the homily, in which he preached on the need to continue to proclaim enthusiastically the message that “Christ is Risen” in a world that desperately needs to hear it.  A wonderful meal followed in the cathedral hall.

At the conclusion of the Liturgy, Metropolitan Tikhon presented the archpastoral staff to Bishop Mark—the same staff with which Metropolitan Tikhon had been presented when he was installed as Bishop of Philadelphia and Eastern Pennsylvania—exhorting him to continue his apostolic work in the diocese.  Bishop Mark then ascended the cathedra and offered his blessing to all present and to the diocese now entrusted to his archpastoral care.

A banquet honoring Bishop Mark was held at the Radisson Hotel Philadelphia Northeast, Trevose, PA, at which time greetings and congratulatory messages were offered.  Archpriest John Kowalczyk, Chancellor of the Diocese of Philadelphia and Eastern Pennsylvania, welcomed all in attendance.  Several gift presentations were made.  As a special gift, the diocese presented a new miter to Bishop Mark as a token of their love and as an expression of their joyful anticipation of the future.

A gallery of photos may be viewed on the OCA web site and Facebook page.

On Tuesday, March 18, 2014, Bishop Mark was elected by the members of the Holy Synod of Bishops of the Orthodox Church in America to fill the vacant Episcopal See of Philadelphia and Eastern Pennsylvania.  The election took place on the opening day of the spring session of the Holy Synod, at which Metropolitan Tikhon presided.

Delegates to the Assembly of the Diocese of Philadelphia and Eastern Pennsylvania, held at Saint Nicholas Church, Bethlehem, PA on January 17, 2014, had nominated Bishop Mark, who had served as the Diocese’s Administrator since 2012, to fill the vacant See. His name was subsequently presented to the Holy Synod for canonical election.

Born on June 22, 1958 in New Albany, IN, Bishop Mark was baptized at Our Lady of Perpetual Help Roman Catholic Church and confirmed at the age of nine years. He attended elementary school at Our Lady of Perpetual Help School and graduated from New Albany High School in 1976. He completed his Bachelor of Arts degree at Oral Roberts University, Tulsa, OK in 1985. In 1987, he was awarded a Master of Arts degree in Biblical Literature from Oral Roberts University, where he accepted the position of Adjunct Professor of Old Testament.

Having been introduced to the Orthodox Church by the Archpriest George Eber, Pastor of Saint Antony Antiochian Orthodox Church, Tulsa, and his professors Dr. Jerry Sandidge and Dr. Howard Ervin of Oral Roberts University, he was received into the Orthodox Church through Holy Chrismation on Great and Holy Wednesday 1989. He attended Saint Vladimir’s Orthodox Seminary, from which he received his Master of Divinity degree in 1991.

From 1993 until 1997, he was employed as a mental health worker at Mercy Psychiatric on a dual-diagnosis unit. On August 17, 1997, he was ordained to the diaconate. He was ordained to the priesthood on September 7, 1997, after which he was assigned pastor of Saint John the Evangelist Antiochian Orthodox Church, Beaver Falls, PA. Concurrently, he was engaged as a crisis worker in the emergency room at the University of Pittsburgh Medical Center, Aliquippa, PA. In January 2001, he was reassigned to Saint George Antiochian Orthodox Church, Grand Rapids, MI.

Bishop Mark was consecrated to the Episcopacy at the Patriarchal Cathedral, Damascus, Syria on December 5, 2004. His consecrating bishops included His Beatitude, Patriarch Ignatius of Antioch and All the East, together with numerous hierarchs of the Greek Orthodox Patriarchate of Antioch. He was enthroned at Saint George Antiochian Orthodox Cathedral, Toledo, OH on August 25, 2005 and served as Bishop of the Diocese of Toledo and the Midwest of the Antiochian Orthodox Christian Archdiocese of North America.

May God grant Bishop Mark many, many years of fruitful ministry as Bishop of Philadelphia and Eastern Pennsylvania.