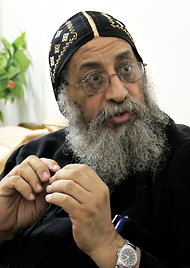 The 118th Pope of Alexandria and Patriarch of All Africa on the holy Apostolic See of Saint Mark was announced on 4 November 2012. Bishop Tawadrous was chosen in an altar ballot, concluding the Papal Selection Process for the Coptic Orthodox Church.

Bishop Tawadrous succeeds the late Pope Shenouda III, who departed on 17 March 2012. In a process that has taken nine months, the new Pope was selected in an altar ballot during a Liturgical service at The Grand Cathedral of St Mark in Cairo on 4 November 2012. The date of the enthronement of the new Pope will take place on Sunday 18th November 2012 at the Grand Cathedral of St Mark, Cairo.

From St Mark Cathedral, His Grace Bishop Angaelos, General Bishop of The Coptic Orthodox Church in the United Kingdom said,

‘The atmosphere was wonderfully joyous in the Cathedral, as people not only here but all over the world raised their hearts asking God’s selection for our new Pope and Patriarch. There was such a euphoric reaction when the name of Bishop Tawadrous was announced, and we now shift our prayers from God’s selection to God’s guidance and grace upon him to lead our beloved Coptic Orthodox Church as it continues its mission to be light and salt in Egypt and throughout the world.’