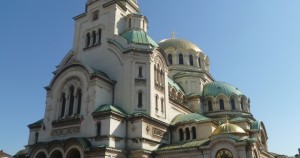 After a day and a half of voting in more than 24 rounds, the governing body of the Bulgarian Orthodox Church, the Holy Synod, chose on February 16 2013 the three metropolitans who will be the candidates in the election for the next Patriarch – Galaktion of Stara Zagora, Neofit of Rousse and Gavril of Lovetch.

This puts Gavril – the only metropolitan eligible for election who was not a communist-era State Security agent – back in the race after he appeared to have been eliminated early in the first rounds of voting on February 15.

Varna Metropolitan Kiril, currently acting president of the Synod and in effect the acting Patriarch, is now out of the race. Time and again, Kiril fell just short of the number of votes required as it appeared that a bloc within the Synod was determined to prevent him being a candidate.

Stalemate appeared to loom and concerns were being raised that the scheduled election of the Bulgarian Orthodox Church’s new Patriarch on February 24 2013 would have to be postponed.

It appears that this stalemate produced the result whereby Gavril came back into the race and Kiril left it.

Notably, while Galaktion was chosen with 10 out of 13 votes on February 15, Neofit and Gavril were chosen with nine votes each.

The names of the three candidates were announced at 3pm on February 15 by Metropolitan Joseph of the United States, Canada and Australia, the spokesperson for the church on the electoral process.

Three hours earlier, Joseph had been emotional as he spoke to reporters about the possibility that the attempts to go ahead with the election would fail.

At noon, Joseph told journalists, who had begun their vigil at the Holy Synod’s Sofia headquarters early on the morning of February 15: “I apologise that I have nothing to tell you. Thank you for your patience. There can be no question of consensus. The voting is going in the same vein”.

The Synod had faced a deadline of midnight on February 16 to come up with their choice.

Asked what would happen if the process failed to produce three candidates, Joseph told the noon news conference: “destruction”. His nerves were shot, he said, tears pricking his eyes.

Metropolitan Gavril was born Gavril Dinev on July 16 1950 in Sofia.

From 1953 to 1966, his family lived in Czechoslovakia, where he attended school. After returning to Bulgaria and finishing high school in the autumn of 1969, he was accepted as a student at the Higher Institute of Civil Engineering in Sofia, completing his studies in 1973.

However, he became increasingly involved in religion and in 1973 he moved into a monastery, becoming a monk in 1979. After entering the priesthood, he studied in Sofia and in Moscow in the second half of the 1980s he was ordained archimandrite of Minsk and in 1986 completed a doctoral dissertation on “characteristic features of the heroism of Russian ascetics in the 19th century” and was awarded a doctorate in theology.

In September 1986, Gavril was appointed head of the Bulgarian church representation at the Moscow Patriarchate, where he remained until 1991. On his return to Bulgaria, he was coadjutor bishop of Sofia until 1998 while from 1994 he was also abbott of the St Petka monastery near Bankya. In 1998, he was appointed Vicar of the Metropolitan of Sofia and in 2001 was elected Metropolitan of Lovetch.

Metropolitan Neofit was born Simeon Dimitrov on October 15 1945 in Sofia. He was educated in Sofia and Moscow and in 1975 became a monk at the Troyan Monastery. He was rector of the Theological Academy, later Secretary of the Holy Synod and became Metropolitan of Rousse in 2004.

Bulgaria’s Dossier Commission, the body charged with investigating public figures’ connections with State Security, identified Neofit as having been Agent Simeonov, recruited in 1983. At the time that his connection to State Security was identified, Neofit said that he felt no guilt about complying with something that had been a requirement when travelling outside the country. State Security had been interested in conferences and meetings abroad and after his return from abroad, what had happened and what meetings there had been. This in no way prejudiced those with whom meetings and conversations had been held, he said, Bulgarian news agency BTA reported at the time.

Metropolitan Galaktion was born on February 26 1949 in Vetren in the Pazardzhik region. After attending school in his village, he entered the St Ivan Rilski Sofia Seminary in 1963 and became a monk on July 12 1969.

He served at the Rila and Bachkovo monasteries after after completing higher theological education was coadjutor bishop of Vratsa from 1976 to 1978, later attending theological college in Moscow and at the Eastern Churches Institute in Regensburg, Germany. After his return from Germany, he was appointed Abbott of Rila Monastery, from December 1982 to June 1985, and then was Abbott of Bachkovo Monastery, from July 1985 to July 1986. From then, until June 1987, he was vicar to the Metropolitan of Vidin, and then vicar to the Metropolitan of Vratsa, to December 1987, and in turn vicar to the Metropolitan of Stara Zagora, to 1993. In 1993 and 1994, he was a member of Parliament for the right-wing Union of Democratic Forces. From 1995, he was chairman of the church council of Alexander Nevsky cathedral in Sofia, until his March 2000 appointment as Metropolitan of Stara Zagora.

State Security recruited Galaktion in 1981. His code name was Agent Misho. Galaktion also was involved in the “Archon” controversy, having been involved in bestowing the ancient and long-disused title on nightclub owner, businessman and sometime politician Slavi Binev. Galaktion also made headlines for allegedly being on the board of directors of a tissue bank.

Bulgaria’s Patriarchal elections: The metropolitan route on the election trail

Advent, and the time of casting of stones in Bulgarian Orthodox Church’s Holy Synod