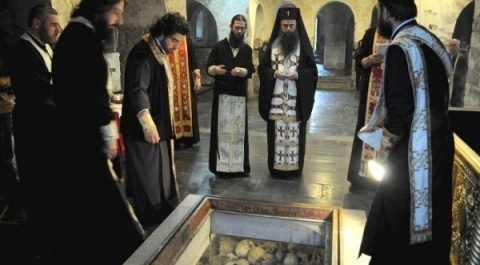 The Bulgarian Holy Synod made the decision to canonize the Batak martyrs in April, 2011. Photo by BGNES

Nearly 900 residents of the Bulgarian historical town of Batak have signed a petition asking interim Patriarch Kiril to stop services at the Sveta Nedeliya Church where the relics of the Batak martyrs are kept.

They want the Church to return to its museum status and State ownership. The initiators further say they found in archives documents showing that as early as 1915 locals wanted the Church with the ossuary to be a museum.

In a recent declaration, the Plovdiv Metropolitan Nikolay stated that services at the Saint Nedeliya Church “will go on forever, every day, three times a day under the religious canons, but these services would exclude baptizings and weddings.”

Nikolay says this is a made-up conflict, flared by some “circles.”

In July 2011, the Batak Town Hall decided that the relics of the Batak martyrs would become property of the Bulgarian Orthodox Church.

The town council people gave the relics to the Plovdiv bishopric, saying their action was removing administrative hurdles, causing tensions.

Until then the relics were part of the Batak History Museum fund, but since they are now relics of Saints, they must be the property and the responsibility of the Church.

With an earlier decision, the Batak Town Hall bestowed to the bishopric the “Saint Nedeliya” church where the relics are kept in a special sarcophagus. The Church was a historical site, but is now also a place where mass can be served.

The Bulgarian Holy Synod made the decision to canonize the Batak martyrs in April, 2011.

In April 1876, Bulgarian freedom fighters rebelled against the authorities of the Ottoman Turkish Empire seeking to liberate their nation and create an independent nation state.

April Uprising was crushed with great violence by Ottoman forces, when an estimated 30,000 Bulgarians, mostly civilians including women, children, and elderly, were slaughtered. Coverage in the European press led to an international outrage and a humanitarian intervention in the Russo-Turkish War of 1877-78.

Between 4000 and 5000 Bulgarians were butchered in the Batak Massacre – in the southern town of Batak – described by journalist MacGahan in a shocking account, while some 700 were slaughtered in the region of Novo Selo, Kravenik, Batoshevo, and Apriltsi – villages in Northern Bulgaria near Lovech.

The Holy Synod is discussing Monday details around the election of a new Patriarch, which must be organized not later than six months after Maxim’s death, thus the deadline is March 6, 2013.