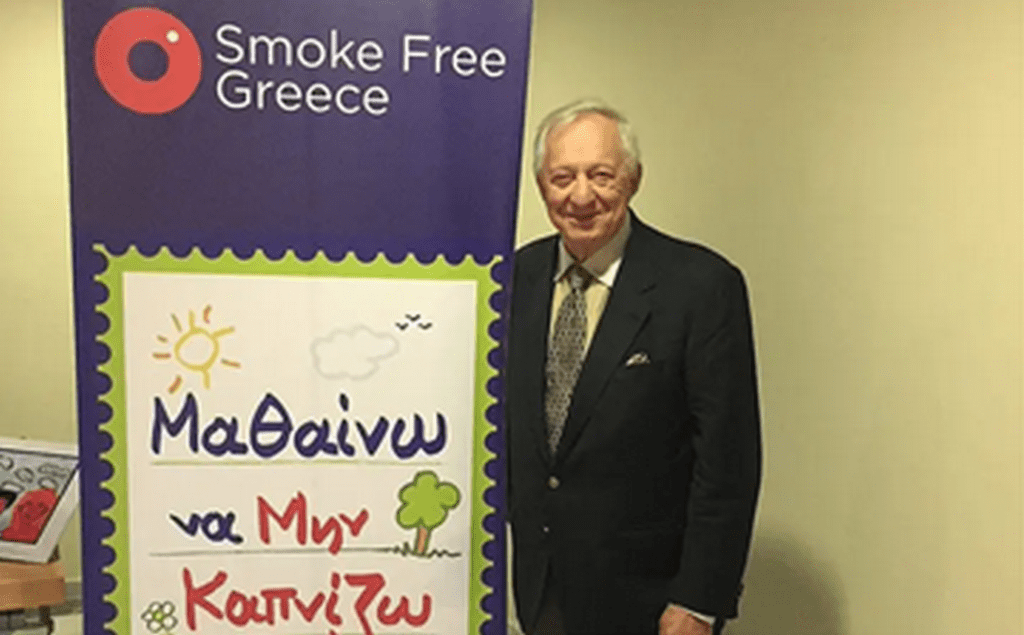 BOSTON – George Behrakis, prominent businessman and grand benefactor of the Greek-American Community, the Metropolis of Boston, the Greek Orthodox Archdiocese of America, the Ecumenical Patriarchate, and Greece – where he has initiated and financed an antismoking crusade among children and young people – spoke

to The National Herald on a wide range of issues. Specifically, Behrakis  spoke about the pandemic, the economy, the Greek-American community, the Archdiocese and the saga of its new charter, the dethronement of Metropolitan Evangelos of New Jersey, the three-months suspension of Metropolitan Methodios of Boston, and the course of the Omogenia in general and the Church in America.

Behrakis is in excellent health, as he said in response to the first question of the interview, stating that “my health is good, I am careful and I have a very good doctor, Dr. George Meltsakos.”

Regarding COVID -19 he said, “I took the booster, the Moderna, and all my family and I may take another booster shot according to what I am reading and I think we still have to be very cautious, washing our hands, using the mask in some places where there are large crowds. I try to avoid large crowds. When I say large crowds, I mean more than twenty people. I stopped going to banquets – I won’t go again until I know the virus can’t come back – and that is debatable. You hear different things from physicians who basically have full knowledge of the virus and can talk about its potential for coming back – but [even if it does]it is not going to be as strong as it was before. It could produce sore throats and headaches, but [the symptoms]will not be as severe – unless there is a new virus.”

Speaking about the war in Ukraine Behrakis said, “Putin’s military hasn’t succeeded. They thought they would do it in one week to ten days – take over Ukraine – but the people are not going to put up with that, and they are giving their lives. Three million people have left, going to Poland, maybe Romania. When you bomb hospitals, maternity wards, schools, that is a disgrace.”

About the economy he said, “originally, it was breaking all records but COVID came in and created a major problem. In many instances people are working from their homes, they are forced to do that. In some cases, [there are oil or gas shortages], so the price went up and when you buy gas for your car the price is $5 per gallon for Super and $4.50 for regular – and in some of western states it is even higher.

The economy could change. The market is going crazy – it goes down then it comes up – but we have the greatest economy in the world. We are number one in oil. We make cleaner gas than anyone in the world. There is more oil in Canada and in the United States than in the rest of the world, so it shouldn’t be a problem. I don’t understand why Washington doesn’t do anything. Why are we buying from Russia? Are we going to get it from Iran now? They hate us. What are we doing?”

He commented about the housing shortage in the Boston area, saying, “it is becoming the most expensive area to live in. Land outside of Boston is running 250 to 400 thousand dollars an acre. It has become expensive because we have an influx into the area. We haven’t lost our population – it has increased in our area. If you look at the Cambridge and Winchester areas, at the greater Middlesex area which is Lowell, Laurence, Haverhill, Andover, North Andover, Tewksbury, to buy an acre of land, it is very expensive.”

Asked how he sees the course of the Greek-American Community, and where it is going, Behrakis replied, “I think we are standing still. We haven’t expanded the way we should. Greeks have the best history of the word, the best religion, Hellenism and Orthodoxy go together. Look at the Greece of the past and of today [and you know]we have to make some changes – otherwise will go extinct. How many Greeks are there in America? About a million-and-a-half? We are a small Community.”

Having served the Church in many capacities throughout the years, he said “today we have to look at the 21st century. We need a ten- or twenty-year plan, as to how are going to succeed. How are we going to get the young people to be fully involved in Orthodoxy? As you know, I grew up in Lowell and we had the Hellenic-American Academy school and we all went to the School. All my children went there. We need to build more parochial schools. More Greek children go the private and Catholic Schools, shouldn’t they go to Greek Schools?”

Asked about who will take the initiative and whether he sees anything coming from the Archdiocese, Behrakis said, “that is a big issue. I can’t answer that because I am not involved directly. I was, but you know we need young blood, well educated people.”

Behrakis is faithful reader of  both editions of TNH, the Greek and English, and he follows ecclesiastical issues very closely. He spoke extensively about the saga of the new charter for the Archdiocese. When we asked him how he sees developments in that area, he emphasized that, “basically, you really update charters, you don’t change them. You modernize them. You need to have a group of professionals to evaluate it – that is very important. We must see where our shortcomings are. What are our weaknesses? Where are our strengths? What is the future? We have so many university professors. Bring them into the Archdiocese and have them evaluate the Archdiocese and determine what direction it should take. Basically, it is a mistake to change anything unless you evaluate, and you must evaluate why you are making changes. Are those changes personal, because of an ego? Is it a power grab? You have to define what the results will be and what will happen in the future – will it be detrimental or it will be a success? You just can’t just say, ‘I will go out and change things for the sake of changing things.’”

Regarding the removal of Metropolitan Evangelos from the Metropolis of New Jersey Behrakis, said “well, I think what is lacking sometimes is not presenting the reasons for what is done to the general public, to the Greek Community, to the Orthodox Community, to the members of the Church. You just can’t fire someone; you have to explain why he is being fired. I run three companies, and when a manager wanted to fire someone, he had to explain to me why he wanted to fire the person. You have to know the reasoning behind it before evaluating why [it was done]. When you run a corporation, you don’t just let people go. I don’t know the situation and I can’t tell you, but we are a Church – you need to explain the reasons why a hierarch is dethroned.”

Regarding the three-month suspension of Metropolitan Methodios a year-and-a-half ago and how he felt about it, he said, “I worked with Metropolitan Methodios. There is nothing wrong with him. I think he has done a fantastic job in the area. Look at St. Methodios Camp and Retreat Center, which is a tremendous success up in New Hampshire. I felt very uneasy when Metropolitan Methodios was suspended because it was uncalled for. I think the same about Metropolitan Evangelos of New Jersey. Was there a committee picked to evaluate him, or was he dumped just because of one person’s thinking? It doesn’t work that way.”

Behrakis had read the TNH article about the School of Theology. Asked if the Community can claim it has a college when there are just forty students in the entire student body, he said, “I was very fortunate that I went to work for major companies. The most important thing I learned was marketing. You have to market yourself and your business. I am not saying the Church is a business – but the School has to be marketed to the Greek Community.”