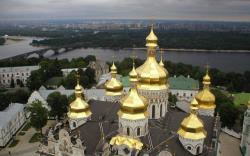 (Vatican Radio) The head of the Pontifical Council for Promoting Christian Unity, Cardinal Kurt Koch, heads off to Ukraine on Wednesday for a visit aimed at deepening the dialogue between Catholics and Orthodox in the former Soviet state.

The Cardinal will spend two days in the capital Kiev, meeting with the small Greek and Latin Catholic communities there. He’ll also hold talks with the Ukrainian Orthodox leader, Metropolitan Volodymyr, of the Moscow Patriarchiate,and other representatives of that Church.

On Saturday the cardinal travels to the Western city of Lviv, the Catholic heartland of the country and on Monday he will make a brief visit to Uzhorod and Mukachevo, close to the border with Slovakia and Hungary. In each of these cities he will also meet with Catholic and Orthodox leaders, before returning to Rome on Wednesday June 12th.

This visit to Ukraine comes 12 years on from the first historic journey of a pope, John Paul II, to the country, where he prayed for a healing of divisions between East and Western Christianity.

Just before his departure, Cardinal Koch talked to Philippa Hitchen about his hopes for continuing this healing process…..