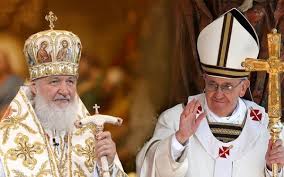 INDIANAPOLIS (CNS) — The U.S. archbishop who is co-chair of the North American Orthodox-Catholic Theological Consultation and an archdeacon who helps lead Orthodox ecumenical efforts in the United States watched with interest as Pope Francis and Russian Orthodox Patriarch Kirill met in Cuba Feb. 12.

Both of them — Catholic Archbishop Joseph W. Tobin of Indianapolis and Orthodox Archdeacon John Chryssavgis — saw significance in the historic Havana meeting of pope and patriarch.

They shared their observations with The Criterion, the newspaper of the Indianapolis Archdiocese.

Archdeacon Chryssavgis, an Australian-born theological adviser to Orthodox Ecumenical Patriarch Bartholomew of Constantinople, described the meeting as “an important, even spectacular moment in relations between Russia and Rome.”

He said it may mark the first “baby steps” of the Russian Orthodox Church’s move to improved relations with other churches.

“The new and critical factor at this point in history is the emergence of the Russian Orthodox Church in its willingness to join the world community at the ecumenical table, so to speak,” said Archdeacon Chryssavgis, “in order to be a vital part of a united Christian response to global issues, such as the unjustified persecution of Christians in the Middle East and the perceived global subversion of Christian values.”

Pope Francis and Patriarch Kirill also signed a joint declaration, which lays out the common ground between Catholic and Russian Orthodox Christians on such topics as marriage, family life, the sanctity of life and religious liberty. The two leaders emphasized most their condemnation of the ongoing persecution of Christians in the Middle East.

“The two points of unity that the document cites are the experience of the first millennium, that is, up until 1054,” Archbishop Tobin said, “but also, in a real way and not simply an empty symbol, the blood of the martyrs, which, by and large, don’t involve Russian and Latin Christians. But they’re Christians. They’re Copts, Syrians and Chaldeans who are dying.”

Archdeacon Chryssavgis noted, “There is no doubt in my mind that, if religion is to have a credible, committed and courageous voice in our world, then Christian — and, more broadly speaking, religious — leaders must speak together against the violence of terror, war and greed. They need to put aside theological or ideological differences in order to respond to the pain and suffering that prevails throughout the world, and especially in the Middle East and Palestine. This is not a political conviction; it is a global reality.”

One of the reasons that there has been no meeting of a bishop of Rome or patriarch of Moscow until now is that the Russian Orthodox Church has disputed the legitimacy of the Ukrainian Catholic Church, one of the Eastern Catholic churches in full communion with Rome.

The Russian Orthodox Church also has challenged the establishment in Russia of dioceses of the Latin Church.

Archdeacon Chryssavgis wondered if this acknowledgement by Patriarch Kirill “was motivated more by political than spiritual factors.”

In their declaration, Pope Francis and Patriarch Kirill condemned the current conflict in Ukraine in which Russian military forces have annexed the Crimean Peninsula and aided Ukrainian rebels in their fight against the country’s government.

Archbishop Tobin saw possible significance in the particular way the conflict was described in the declaration.

“The document doesn’t use some of the language that is traditionally used by the Orthodox Church to describe what is happening there,” he said. “I think this is significant. It doesn’t use the word ‘civil war’ or ‘fratricide,’ which means that this is basically a Ukrainian dispute.

“By not using this language, it leaves open the possibility that it is actually being provoked by someone else. Sometimes it’s not what you say, but what you don’t say. By not using traditional code words like ‘fratricide’ or ‘civil war,’ the patriarch might be recognizing that this isn’t simply Ukrainians who can’t get along.”

Apart from the political and military realities and theological disputes that serve as the background to the meeting of the pope and patriarch, none of which were solved by the meeting, Archdeacon Chryssavgis saw importance in the mere fact that the leaders of these churches met and spoke with each other for the first time.

“I believe that there is a significant, almost sacred dimension to dialogue,” he said. “If we are true to ourselves and honest with those with whom we are in dialogue; if we are not simply in dialogue in order to impose our own will and our own way; if we approach the other in dialogue in truth and in love, then we leave ourselves susceptible to transformation.

Gallagher is a reporter at The Criterion, newspaper of the Archdiocese of Indianapolis.