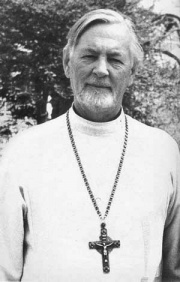 By Seraphim Danckaert in The Sounding

Several years ago, Orthodox peoples in America were happy to see coverage of our faith on broadcast television when CBS aired a documentary about life on Mt. Athos.

Although such mainstream coverage is rare, it is not entirely without precedent.

Decades earlier, Fr. Alexander Schmemann, the long-time dean of St. Vladimir’s Seminary and a major voice in 20th century Orthodox Christianity, used to appear on a CBS program called “For Our Times.”

Shortly after Fr. Schmemann’s death, the show aired a documentary about his life and influence, “a recollection of the man and a tribute to his memory.”

CBS News correspondent Douglas Edwards begins the broadcast by saying: “Fr Alexander Schmemann was a friend of this broadcast and frequent participant. He was an articulate, scholarly, and personable witness for Orthodox Christianity, and an effective contributor to the ecumenical movement, to East-West relations, and to the Christian-Jewish dialogue. He saw with a fresh perspective what was radically new in his ancient tradition and what was already stale and outmoded in much popular novelty.”

Narrated by a young, white-cassock-wearing Fr. Thomas Hopko, and featuring footage of Fr. Alexander, as well as interviews with church leaders such as His Eminence Archbishop Iakovos of America, the documentary is a window not only into the life of Fr. Schmemann but also into an earlier era of American Orthodox life — indeed, into American life in general: it would be hard to imagine a major broadcast network devoting time to such matters today.

Check out the video, embedded above, and let us know your thoughts or memories.