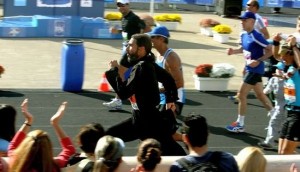 “I wanted to show that the Church always lived with its people and was present at all events: from public events to sports. That’s why I took part in this marathon. I could see that the people liked it: whenever I was running, I was applauded more energetically than other participants. Some people asked for prayers. And I was praying while running!”

Father Athanasios, 43, was probably the most unique runner and very different from other participants of the Athens classic marathon, reports Romphea.

Although he did not break any records, he managed to make a tremendous impression, appearing at the competition in his cassock.

Fr. Athanasios has the rank of captain; he lives and serves as a military chaplain in Ptolemais, Greece in the first army corps. A father of five children and an amateur runner, the priest decided to run 42 kilometres of the marathon to draw the people’s attention to the Church.

“It was interesting to me to take part in the competition. The people welcomed me very warmly. I heard no negative comments—quite to the contrary. Only one person told me that he wished I would run next year marathon without a cassock. ‘But then you would have not understood that I was a priest’, I replied to him,” says Fr. Athanasios.

The priest received a blessing to participate in the competition from Metropolitan of Florina, Prespon and Eordeas, who encouraged his decision to run the distance in the cassock, though it was not compulsory.

“I ran in the cassock because that is precisely how I could convey my message,” explained the priest.

Fr. Athanasios Vlahodimos finished in 4 hours 16 minutes, although as he says he had run the same distance in 3 hours 40 minutes during the practice race.

“I came in with a delay because I got a cramp in my leg. Fortunately, there was nothing serious, only worse time results. But I am pleased merely to have participated. Besides, all participants are awarded with a medal if they reach the finish, and that is the meaning of the marathon,” said the priest.