[ditty_news_ticker id="27897"] CHECKMATE: SERBIAN ORTHODOX DIPLOMACY IN THE SHADES OF THE UKRAINIAN WAR 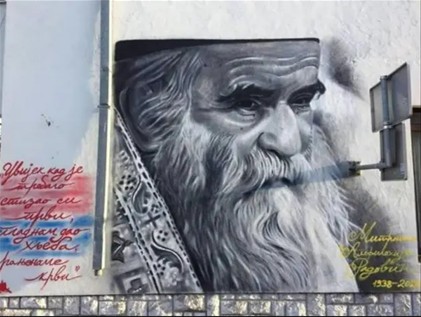 This spring, the Serbian Orthodox Church (SOC) sealed significant and important deals, which has solidified and strengthened the SOC’s position. The first “deal” in May turned the Macedonian Orthodox Church (MOC), formally the Ohrid Archbishopric, into a canonical church, which ended around 50 years of estrangement between the SOC and MOC. The second one in July was between the SOC and the Montenegrin government, which granted the SOC privileges in Montenegro and closed almost twenty years of uncertainty between the two parties. These deals are not just a sign of the new diplomatic strength of the recently elected (2021) patriarch Porfirije (Perić, 1961-) and a different composition of the SOC synod but of the impact the Ukrainian war has on other global Orthodox conflicts. In the following, I will discuss how and why the SOC has taken these steps and what they mean in the long run.

The end of stalemate in Montenegro

As I passed through the central Montenegrin town of Kolasin this summer, a massive mural of the recently deceased metropolitan of Montenegro, Amfilohije (1938-2020), appeared on a multi-storage apartment building. The massive painting depicted him with a traditional Orthodox halo, underlining that he is already on the way to sainthood so shortly after his death. This was not a singular picture, but I noticed similar ones in the Montenegrin towns and cities. The reason for this rapid promotion of the Metropolitan Amfilohije is his role in the protest movement back in 2020, which led to the recent change of regimes in Montenegro. These changes in government in 2020 paved the way for the new advantageous agreement that the SOC reached with the current government this summer. The new deal between the government and the SOC is a complete reversal of the conditions of a prior law on religion in Montenegro passed through parliament in late 2019. The former law could have been used to confiscate SOC property and heritage in Montenegro and put severe roadblocks to the links for SOC between Montenegro and Belgrade. The law was put in place by the prior Montenegrin nationalist government, who argued that the SOC in Montenegro was an alien and threatening power to the Montenegrin nation.

The new Montenegrin government’s approach is quite different due to the essential backing of SOC, which secured the popular base for the government. The new deal—formally signed on July 3rd—has granted the SOC all right to its (sometimes questionably acquired) property and heritage and extensive new rights in Montenegrin society. The perhaps most surprising and long-reaching part of the agreement is a somewhat blurred formulation about restitution. The question of restitution is tense for a church that had almost all its land confiscated during the great socialist agrarian reforms of Yugoslavia. This might be a formulation of good intention but could also pave the way for SOC’s claim to even more land, sites, and heritage, which the new Patriarch and Metropolitan of Montenegro already signaled with a renewed claim to the monument of Lovćen on July 28th.[i]

The new law set the stage for the SOC to completely dominate Montenegrin Orthodoxy and thwart the uncanonical Montenegrin Orthodox Church. The new deal is perhaps just an outward sign of these changes to Orthodoxy in the region. I would claim that this shift already came as a consequence of the debate over the 2019 law of religion, where the SOC rallied up support. The massive mobilization amongst the SOC and its supporters in 2022 seems to have had a more significant impact. The general “trust”—measured by a local bureau (CEDEM)—to the uncanonical Montenegrin Orthodox Church has taken a considerable dive since 2019, and the SOC has risen and stabilized its position in the poll. According to my estimates, only around ten per cent of the population now supports the church, unlike the twenty-five per cent just a few years back.[ii] This ten percent is a vocal opposition against the SOC, which was seen during the enthronement of the Metropolitan of Montenegro in September 2021, where patriarch Porfirije and the new metropolitan had to take a helicopter between churches to avoid burning barricades on small Montenegrin mountain roads. The new deal puts a political end to all this and would be difficult to revere if a Montenegrin nationalist party returns to power.

The re-establishment of the Ohrid Archbishopric

The new advantageous agreement for the SOC in Montenegro this July comes after a year of diligent work by local clergymen and especially the new Serbian Patriarch Porfirije. He took office in 2020, when several high-ranking members of the SOC fell to the pandemic that ravaged the church leadership. Both the SOC patriarch and the Metropolitan of Montenegro were therefore replaced in 2020 and 2021. Patriarch Porfirije has since then pushed for a deal in Montenegro, but also for the solution to other problematic flanks of the SOC. In particular, regarding Macedonia, which had—somewhat like Montenegro—been a scene for ecclesiastical strife. During the communist period, the Macedonian clergy had acquired autonomous status and shortly after, in 1968, declared themselves unilaterally autocephalous. Unlike Montenegro, where any rival to the SOC has been kept at bay, the Macedonian Orthodox population almost unanimously became part of this unrecognized church. In 2001, the SOC and the Macedonians had tried to solve the issue under oversight from Moscow but failed due to the constant issue with the name (wherefore some Greeks will deter my use of the term Macedonians).[iii] However, this issue was also solved in May this year with some role played by the Ecumenical Patriarch. The core of the agreement is that the MOC is now formally known by the Greeks as the reestablished Ohrid Archbishopric, whereas the MOC itself will keep referring to itself as Macedonian. The deal itself was rather quickly announced, pushed through and seemed to have silenced all opposition even from the Bulgarian Orthodox Church, which also claims the heritage of the Ohrid church. The deal rest on a pragmatic alliance between the SOC, MOC, and the Ecumenical Patriarch.

It is and will be unclear how much effort the new Serbian Patriarch played in the coming about of these two issues, which for years have seemed to be problems with no solution in sight. It is also unclear how much groundwork was laid before this by the SOC and what role Constantinople played in it all. I will, however, venture into a qualified guess of the dynamics at play after spending part of the spring in Southeast Europe amongst the region’s clergy.

First, the leadership change—the Patriarch and several influential members of the SOC synod—has made both deals possible and perhaps even necessary. The agreement in Montenegro might have come about without the change in leadership, but the changes have perhaps made the process swifter because of the direct involvement of the Patriarch. In contrast, it seems like the change of the SOC synod has meant an easier rapprochement to the MOC and abandonment of the support to the tiny SOC-backed minority church in Macedonia, whose raison d’être the deal has ended.

Second, both the Montenegrin government and the MOC seem to have been ready on their part to end the strife for different reasons. For years, the MOC sought a peaceful solution with either the SOC or the Bulgarians in particular after the name agreement between Greece and North Macedonia was signed. In Montenegro, it has been one of the key priorities for the new government to cancel the law of 2019 and reach some form of new agreement with the SOC.

The perhaps most important reason all partners have signed the two deals lies outside of the region. It seems like the situation in Ukraine—both regarding the war and the ever more complicated relations and status of the various Orthodox churches—has made the situation more dire. Each of the partners has realized that they do not want anything resembling Ukraine, and the war has become a burning platform to solve the issue at hand.

The one that gains most from these deals is the SOC. The church has secured two of its flanks and formed what seems to become a long-lasting alliance with the MOC. This allows for it to concentrate on other issues, such as the status of Kosovo or the SOC’s own position in other former Yugoslav republics. The advantageous deal in Montenegro opens up a question concerning property and restitution in Bosnia-Herzegovina and Croatia. It also allows the SOC to continue its passive position on Ukraine. Regardless of these backdrops, the two new deals could perhaps serve as examples of how conflict can be solved peacefully in the Orthodox world.

[i] Ssee also Emil Saggau, “A Shrine for the nation – the material transformation of the Lovćen site in Montenegro,” Journal of Balkan and Near Eastern Studies (November, 2017) for more background to this particular debate.