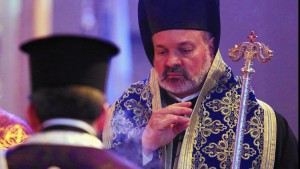 Bishop Demetrios of Mokissos, the No. 2-ranking official in the Greek Orthodox faith in the Midwest, denies any improper activity regarding a criminal investigation into a priest accused of stealing from his former church. (Anthony Souffle, Chicago Tribune)

Prosecutor: Chicago Greek Orthodox bishop was warned not to intimidate witness in theft case against priest

A high-ranking Greek Orthodox bishop in Chicago was warned by a prosecutor against “potential efforts to intimidate witnesses” in a case involving a priest accused of stealing more than $100,000 from a Milwaukee church.

The warning came after another priest in Milwaukee told authorities that Bishop Demetrios of Mokissos, the No. 2-ranking official in the Greek Orthodox faith in the Midwest, threatened in emails to remove him from his post if the church did not withdraw a theft complaint against the priest’s predecessor.

“We have received some extremely distressing news regarding potential efforts to intimidate witnesses,” a Milwaukee prosecutor wrote to an attorney for the Chicago church leadership last April, according to court documents. “… I believe that Bishop Demetrios needs to retain independent representation as quickly as practical.”

The emails were exchanged between the bishop and the Rev. Angelo Artemas of Annunciation Church in Milwaukee as prosecutors there were investigating theft claims against a former Annunciation priest, the Rev. James Dokos.

The emails indicated the bishop sought a meeting with Annunciation leaders to talk about the case against Dokos, who has since been charged with improperly spending money from a trust fund intended to benefit the church.

Members of Annunciation had taken their concerns about the trust fund to Milwaukee authorities after officials with the Greek Orthodox Metropolis of Chicago determined in an internal investigation that Dokos did nothing wrong.

Last March, Artemas wrote to Demetrios to say Annunciation’s parish council had declined to meet with him. “Due to your letter last August indicating Fr Dokos did nothing wrong, they are unanimous not to meet,” Artemas wrote in emails later entered into the court record.

Demetrios responded: “If that is the case, then in (sic) will ask His Eminence to release you from there ASAP and offer your services to the Archdiocese for placement. I’m sorry.”

When Artemas responded that he was not seeking to leave his position, the bishop wrote back that he would check with his superior, Metropolitan Iakovos. “However … no threats or harassment here, he is VERY open to your release from the Parish and Metropolis if this is not brought to closure before Holy Week.”

In a court filing, Milwaukee prosecutors said the emails led Artemas “to believe that he was going to be involuntarily removed from his parish unless he compelled Annunciation to withdraw the complaint.”

“The Metropolis never intimidated, threatened or harassed anyone,” the statement said. “The assignment of Parish Priests (is) an internal matter of the Church.”

Demetrios has not been accused of any criminal wrongdoing, and Artemas remains pastor at Annunciation. But the emails provided another indication of the tensions within the metropolis after Annunciation members took their concerns about Dokos to authorities,

By the time the criminal investigation was underway, Dokos had been transferred to Glenview’s Sts. Peter and Paul Church. When the parish council president there asked the metropolis to place Dokos on leave until the investigation concluded, the president received a sharp rebuke from Iakovos, who instead removed him as parish president.

Iakovos wrote that he was “astonished” by the Glenview parish council’s “inappropriate suspicion and deceitful maneuverings rather than the support of its own pastor in time of need.”

Dokos, 62, of Chicago, was later placed on leave after he was charged with felony theft last July. At a hearing this week, a judge declined to dismiss the charge, rejecting Dokos’ attorney’s argument that the case amounts to state interference in church affairs.

Dokos, who controlled the fund as Annunciation’s priest, paid the church $1.1 million from the fund after Franczak died in 2008. But prosecutors said he failed to tell church leaders about money left over.

“In all, (Dokos) retained more than $100,000 in trust monies that, contrary to the terms of the trust, he never turned over to the church,” court records state.

Metropolis officials have said their “initial conclusion” from their own review was that the trust fund money was spent properly, court records show.

Demetrios told investigators in 2013 that metropolis lawyers and accountants had reviewed the trust, according to court records. The bishop said he personally questioned Dokos about how the money was spent and was satisfied when Dokos told him the Annunciation council had approved the spending, the record states.

“Bishop Demetrios acknowledged that as part of his investigation he never spoke to any member of the Parish Council to confirm this,” the court record states. Annunciation officials have denied that they approved Dokos’ spending, court documents state.

Demetrios himself received at least $6,700 in checks written by Dokos from the fund, according to documents obtained last year by the Tribune.

A metropolis spokesman last year described those payments as gifts, which he said may be used for church or personal expenses and are “duly reported as income.”

Last May, Demetrios wrote a letter to Milwaukee prosecutor David Feiss,complaining that Annunciation leaders “have taken advantage of the ongoing investigation by your office to avoid their own responsibilities in the administration of the Parish.”

The letter, contained in court records, states: “They have wrongfully attacked the integrity of the Metropolis of Chicago or myself personally, knowing that any response is either construed as ‘tampering’ with an investigation or is actually prevented by our own protocols and regulations. In short, there is no doubt that the Parish has gone ‘rogue.'”