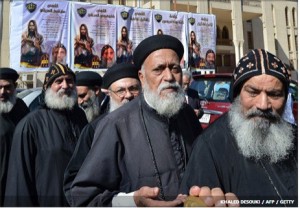 While Americans prepare to elect their next president on Tuesday, Egyptian Christians are leaving this Sunday’s choice for their highest leader up to a higher power: God.

On November 4, one of three final candidates will succeed Pope Shenouda III, the beloved “pope of the Bible” who died in March, as the 118th patriarch of Egypt’s Coptic Orthodox Church. But in contrast to the “group consensus” method used to select Roman Catholic popes, the casting of lots will determine whether Bishop Raphael of Cairo, Bishop Tawadros of Beheira, or Father Raphael Ava Mina, a monk from the Monastery of St. Mina near Alexandria, becomes the next spiritual leader of Egypyt’s 8 million Orthodox Christians.

“It is easier to find biblical support for choosing by consensus than by lot,” said Atef al-Gindy, president of the Evangelical Theological Seminary of Cairo. “But I have observed the sincerity and genuine desire of Orthodox leaders to conduct a process that is clean and according to the will of God, seeking his guidance.”

The result has been an election campaign celebrated by Coptic Christians, more than 90 percent of whom are Orthodox. Their church traces its descent from the preaching of St. Mark, the Gospel writer.

A selection committee of 18 members—divided equally between laity and clergy—whittled the potential candidates from 17 down to five. Then more than 2,400 electors, also comprised of both laity and clergy, voted Monday for their choice of up to three candidates to advance to the final stage. The final choice is surrendered to God via holy lot, allowing a blindfolded child to select the winning candidate Sunday in an altar lottery at St. Mark’s Cathedral in Cairo.

Youssef Sidhom, editor-in-chief of Coptic newspaper Watani, says many Copts frowned at a few of the original 17 candidates. Yet “everyone breathed a sigh of relief” when the final candidates were announced, he said.

“Of the final three, there is no real preference between them,” Sidhom said. “But it makes no sense to have a preference anyway, because we believe the choice will now come from God’s will.”

If votes did count, Bishop Raphael would be the winner. Raphael, who became well known as bishop of the church’s Cairo district, obtained the largest number of votes from electors. Bishop Tawadros came in second.

Hani Labib, managing director of the Center for Intercultural Dialogue and Translation, said Bishop Tawadros’ selection to the final round was due to his discipleship under Bishop Pachomious, the acting patriarch during the ongoing contentious political transition in Egypt.

As for Father Mina, Labib explained the third finalist is appreciated as a disciple of Pope Cyril VI, who is often contrasted by Copts as a man of prayer versus his successor Pope Shenouda, who was a man of politics.

“Many people wanted a pope from the monasteries because [a monk]is unassociated with church politics and primarily concerned with prayer and the monastic life,” said Labib.

Sidhom says all three chosen candidates represent a shift away from the leadership style of Shenouda.

“No more will the church be expected to represent the Copts politically,” he said. “The papal candidates clearly understood and expressed that, in the current situation, Copts must get out of the church and speak for themselves. They must integrate into the political arena and defend their rights.”

This is the case even though Coptic leaders explain many Egyptian Christians feel pressure from the rise to power of Islamists, from whose ranks Egypt’s current leader, President Mohamed Morsy, hails.

“All candidates said that in leading the church, they are bound by the command to keep amicable relations with the state,” said Sidhom. “They will invite President Morsy to the installation ceremony, and have nothing against receiving officials from any political party.”

This pleases Gindy as well.

“The pope, as well as all church leaders, have political responsibilities,” he said. “But they must not be politicians.”

Gindy does take slight issue with the selection process of this Orthodox leader. “The lot is found in the Old Testament and also in the selection of an apostle to replace Judas,” he said. “Meanwhile, the book of Acts and Matthew 18 lend support to the idea of the church meeting together to decide its issues.”

Even so, Gindy expressed hope that the next pope will be committed to warm and respectful ecumenical relations, and said he sees signs of this reality.

“Bishop Pachomious led the process not only administratively, but also spiritually—encouraging the people to fast for three days before each selection stage,” Gindy said. “He even invited Protestants and Catholics to fast along with the Orthodox, which was very wise.”

The final three-day period of fasting began Wednesday. Whether Orthodox, Protestant, or Catholic, the result of the lot cast Sunday concerns all Egyptian Christians.

“As a minority church, we have to have unity—especially in this critical time,” Gindy said. “More than at any other time in our history.”

Jayson Casper is a researcher with Arab West Report and the editor of Orient and Occident, a bilingual magazine of the Egyptian Anglican Church. He writes about Egyptian politics, religion, and culture at A Sense of Belonging.