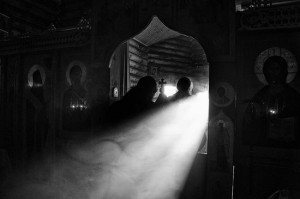 It is important to clarify the Church’s teaching on asceticism because many voices in the environmental movement encourage a kind of ascetical lifestyle in the name of “ethical consumption.” Orthodox writers on the environment are not immune to the temptation of putting the ascetical tradition of the Church in the service of another agenda. For example, the conclusion of the Inter-Orthodox Conference on Environmental Protection, held in Crete in 1991, states: “Humanity needs a simpler way of life, a renewed asceticism, for the sake of creation.”

Many Orthodox writers call on asceticism—fasting in particular—to reduce consumption. Deacon Dr. John Chryssavgis, the theological advisor to the Ecumenical Patriarch Bartholomew on environmental issues, has noted that, “In his now classic article entitled ‘The Roots of our Ecological Crisis,’ Lynn White already suspected—although he did not elaborate on—the truth behind asceticism.” Furthermore, Orthodox theologian Elizabeth Theokritoff has pointed out the beneficial effects of Orthodox fasting discipline (which includes abstaining from sexual relations) on population control. Given the temptation to which many have succumbed, a few words on the proper role of asceticism are in order.

Asceticism comes from the Greek askēsis, which simply means “exercise.” Asceticism, therefore, is simply spiritual exercise undertaken for the health of the soul. Here, we must be careful to set aside popular caricatures of asceticism as either a kind of masochistic, self-flagellated misery or a kind of Gnostic attitude which exalts lofty spiritual things over crass material things. (This latter view is often associated with those environmentalists who have constructed a religion of nature worship.) With regard to this caricature of asceticism, Romanian Orthodox theologian Fr. Dumitru Stăniloae noted:

According to the current use of the word, asceticism has a negative connotation. It means a negative holding back, a negative restraint, or a negative effort. This is because the sinful tendencies of our nature, the habitual things that lead to its death, have come to be considered as the positive side of life. Ascetical striving, though negative in appearance, confronts the negative element in human nature with the intent to eliminate it by permanent opposition.

Viewed in proper balance, asceticism is a positive, life-affirming attitude and set of practices that seeks human freedom by overcoming the passions—the sinful and disordered habits and attitudes that poison our relationships, primarily with God but also with ourselves, our neighbor, and the world. These passions are the “seven deadly sins” of classical spirituality that enslave the heart, cloud the reason, poison relationships, and in general lead to the disintegration and corruption of the soul, and by extension, to the misery of the world caused by corrupted people acting in corrupted ways.

Much could be said about asceticism and the passions, but for our purposes, we might say that to be ascetic is to learn to live rightly on the earth with God, our neighbor, and creation. With regard to our relationships, our ascetic stance before God is one of humility and obedience. Before our neighbor, as the Gospel puts it, we seek to be the last, not the first; humbled, not exalted; the servant, not the master. (Mark 10:13). Before creation, Greek Orthodox theologian Metropolitan John Zizioulas tells us, “Man dies as to his claim to be God in creation, and instead recognizes God as its Lord.” In each case, we are brought to a new relationship with the other; in the case of our relationship to creation, an ascetical stance clearly alters the demands we make on the material world, both what we ask of it and how much we ask. In this respect, Orthodoxy’s call to ascetic striving for the sake of one’s salvation is in line with free market principles of voluntary activity and lifestyle choices.

The ascetical tradition of the Orthodox Church includes many practices: prayer, fasting, almsgiving, keeping vigil, inter alia. They are the active part of the spiritual life, our voluntary cooperation with the grace of God. As such, it is important that we not be tempted to use the ascetical practices of the Church for ends they were not designed to serve. Thus, we need to be careful of “environmental consciousness” masquerading as authentic spiritual practice.  Moreover, we must keep in mind that it is the believer’s practice of asceticism, not asceticism qua asceticism, that is important.

For example, fasting out of ecological conviction, or eating “lower on the food chain” (i.e., avoiding meat or eating a vegan diet) is spiritually useless for the Christian. Fasting is not dieting; neither is it an ecological statement. For a Christian, fasting is a spiritual discipline that is fruitful when it is joined with prayer and repentance, a discipline that is oriented toward God to effect the purification and transfiguration of the heart. What is more, for Orthodox Christians to use the ascetical discipline of fasting for any other purpose undermines its real purpose. If we do not use ascetical disciplines to grow in a right relationship with God, we will not grow in right relationships with our neighbor or with creation either.

This leads us to a deep irony that seems to be lost on those who focus on the superficial similarities between Christian asceticism and environmentalists’ calls for restricting consumption: Concern for the environment that distracts us from the purification and illumination of the heart will actually hinder our ability to transfigure creation and offer it back to Christ. That is to say, concern for environmentalism is inversely proportional to our effectiveness in transfiguring the environment. At this point, we are tempted to leave off writing altogether, lest our efforts undermine the end we are trying to pursue. Having drawn attention to the danger and the temptation, however, we can proceed if we do so with caution.

In short, spiritual tools must be used for spiritual ends. We “seek first his kingdom and his righteousness, and all these things shall be yours as well” (Matt. 6:33). As Elizabeth Theokritoff reminds us in her 2010 book, The Salvation of the World and Saving the Earth: An Orthodox Christian Approach:

The salvation of the earth is not in our hands, either individually or as a human collective: it is the work of the Creator and Savior, and our task is to conform ourselves to him. Re-created in the image of the new Adam, we are called to image God’s love and compassion for all creation, so fulfilling his economy of salvation by growing into his likeness.

What then is the Christian to do to integrate the Church’s ascetical traditions into his or her interactions with God’s creation? First, we must resist the temptation to impose our asceticism on others, as the value of the ascetical practices lie in the voluntary denial of consumption as a means of growing closer to God. Using the power of the state to compel asceticism in others would thus be counterproductive in a spiritual sense. Moreover, we must distinguish our own practice of asceticism from efforts to deny others’ the benefits of God-given human creativity; we cannot force asceticism onto others. For example, efforts to restrict the increasing use of energy by the world’s poor are at odds both with true asceticism and with our duty to be charitable to our neighbors. Given the horrific costs of indoor air pollution caused by burning dung and similar fuels in homes by the world’s poorest, building electrical power plants in poor countries should be applauded.

Second, we must also avoid shifting the costs and burdens of our own “asceticism” onto others. Lobbying for subsidies and mandates for corn-based ethanol that leads to higher food prices, at tremendous cost to the world’s poor, is a particularly pernicious example of faux asceticism in which the warm feelings of doing good among the wealthy are primarily paid for by the poorest. For example, a Tufts University study estimated that U.S. corn ethanol mandates cost Mexico $1.5 to $3 billion through increased food prices from 2006 to 2011. Similarly, the European Union’s Common Agricultural Policy imposes tremendous costs on the poor in developing countries by denying them markets for their agricultural products through subsidies to European farmers in the name of promoting sustainable agriculture.

Third, we must resist the temptation to seek to subsidize our own consumption. If doctors are enjoined to “first, do no harm,” a similar injunction applies to government policies. Providing ourselves with subsidized goods and services, such as fuels, food, and electricity, not only encourages overconsumption of those goods and services, thus leading us away from both good stewardship and opportunities to practice asceticism, but also causes damage to God’s creation. The vast, federally subsidized water projects in the western United States and the World Bank’s tragic record of supporting destructive “infrastructure” projects such as dams in developing countries are two examples. No less damaging is the common practice in oil-producing nations of subsidizing consumption of fossil fuels—Venezuela’s 4 cents per gallon of gasoline is similarly a destructive practice. In each case, creation is sacrificed to venal goals—such as purchasing voters’ support for governments—that are inconsistent with our responsibility as stewards.

Nature has a right to be transformed and uplifted, spiritualized and revived, and mankind has an obligation to serve that right, to love nature, not for our sake alone, but for its own sake, and not just for the utility that it can provide. But such a realization requires of us an attitude toward the natural world that does not preclude stewardship of the world and its resources to meet human needs but goes beyond it to the fulfillment and perfection of creation for its own sake.

This essay was adapted from Creation and the Heart of Man: An Orthodox Christian Perspective on Environmentalism (Acton Institute, 2013). The monograph is available in as an eBook and in print from the Acton Book Shop.