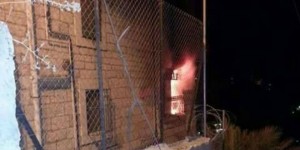 “Ah, sinful nation, a people laden with iniquity, offspring of evildoers, children who deal corruptly! They have forsaken the Lord . . . ” (Isaiah 1:4).

In an anti-Christian incident which has largely gone unnoticed, the St. Charbel (Maar Charbel) Monastery in Bethlehem was attacked and burned down on September 26th. The monastery is located in the Wadi Maali neighborhood of the city where King David was born and is the reputed birthplace of Jesus.

As a result of the fire, several rooms on the church’s second floor were completely destroyed. No one was killed or injured.

Bishop Moussa El-Haj reported that two days prior to the burning of the monastery, the building was broken into by Palestinian Muslims, and precious items were stolen.

Father Gabriel Naddaf, an Arab-Israeli priest of the Greek Orthodox Church, blamed “Palestinian extremists” for burning down the church.

Naddaf, an important figure in Israel’s interfaith community, is also a judge in the community’s religious courts, a spokesman for the Greek Orthodox Patriarchate of Jerusalem, and a proponent of recruiting and integrating Arabic-speaking Christians into the IDF, Israeli police and national service institutions.

“I condemn with all my heart the laxness of the Palestinian Authority in protecting Christian holy places it controls. I also hope that all the Christian leaders who demonstrated when the Church of Bread and Fishes near Tiberias was burned down will also demonstrate against this terrible act,” Naddaf wrote on Facebook.

Christian leaders in Bethlehem joined Naddaf in condemning the Palestinian Authority. The PA, for their part, claimed that the fire was caused by an electrical malfunction.

Naddaf quoted local sources who said that the fire was just another in a long series of attacks by Muslims against Christians in Bethlehem. “The PA tries to sweep these incidents under the rug but it never condemns these acts, which interfere with freedom of religion,” the sources said. Naddaf wrote a scathing rebuke of PA leader Mahmoud Abbas, demanding that before he “lectures Israel on its morality, he should look at his own responsibilities and deal with them appropriately.”

Israeli Prime Minister Benjamin Netanyahu has urged the Palestinian Authority to bring the perpetrators of the act to justice. A statement on Netanyahu’s Facebook page read, “I am disturbed by the damage to St. Charbel Monastery in Bethlehem, which was burned last Saturday. If we are speaking about the actions of extremists, I expect the Palestinian Authority to catch those responsible, as Israel has done to extremists who have attacked the holy sites of all religions.”

This is not the first suspected arson attack against a Christian church in Israel. In June, Church of the Multiplication on the Sea of Galilee was torched and graffitied, sparking outrage throughout the country. The Israeli government compensated the Church for the damage incurred.