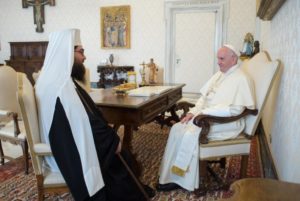 Pope Francis talks with Metropolitan Rastislav, primate of the Orthodox Church in the Czech and Slovak Republics, during a meeting in the Apostolic Palace at the Vatican May 11. The pope said seeking Christian unity is more urgent than ever because of the ongoing persecution of Christians. (CNS photo/Vatican Media) See POPE-ORTHODOX-SAINTS May 11, 2018.

ROME – Seeking Christian unity is more urgent than ever because of the ongoing persecution of Christians, Pope Francis told an Orthodox leader.

Meeting with Metropolitan Rastislav, primate of the Orthodox Church in the Czech and Slovak Republics, the pope said the “suffering of many brothers and sisters persecuted because of the Gospel urgently calls us to act in seeking greater unity.”

The primate met with the pope at the Vatican May 11 as part of a May 9-12 pilgrimage to Rome; during his visit he also met with Cardinal Kurt Koch, president of the Pontifical Council for Promoting Christian Unity, and celebrated the Divine Liturgy at the tomb of St. Cyril in Rome’s Basilica of St. Clement.

Sts. Cyril and Methodius are honored by both Catholics and Orthodox. Known as the Apostles to the Slavs, the two brothers preached the Gospel throughout Central and Eastern Europe in the late ninth century when the churches of Rome and Constantinople were still united.

Rastislav, 40, gave the pope an icon of the two saints together with his namesake, Prince Rastislav of greater Moravia, whom the Orthodox revere as a saint and honor with a feast day May 11.

“May it be a token of friendship and goodwill, a memorial of common history and a sign of hope for future,” he told the pope.

In his address, Francis said Sts. Cyril and Methodius are just two of the many holy men and women, witnesses and martyrs the two churches share. May their example “help us to appreciate this heritage of holiness that unites us,” the pope said.

Referring to the important contribution the two saints made to Christianity by translating Scripture into local languages, the pope said they are “a model of evangelization.”

They show that to proclaim the Gospel, “it is not enough to reaffirm models from the past, but one must also listen to the Spirit who always inspires new and courageous paths for evangelizing” people today, he said.

“I ask the Lord, through the intercession of Sts. Cyril and Methodius that we may one day reach the full unity toward which we are walking,” a unity that does not mean uniformity, but rather “the reconciliation of differences in the Holy Spirit.”