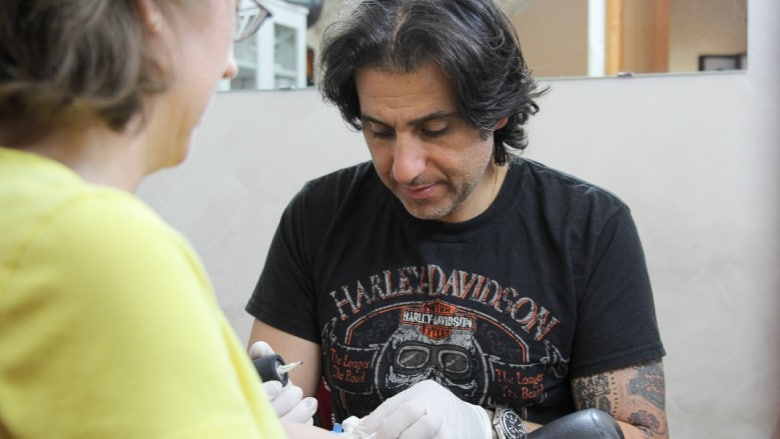 Wassim Razzouk inks a tattoo on a client at his family’s shop in Jerusalem Old City. (Derek Stoffel/CBC)

A mother and her daughter from rural Indiana walked through the narrow alleyways of Jerusalem’s fabled Old City recently, gazing up at the wooden crosses and rosaries hanging from shop stalls. What to take home?

They decided ultimately on another way to mark their pilgrimage to the Holy City: tattoos.

A day later, Karen Andrews and her daughter Jamie both had blue Ichthys fish — the Christian symbol linked to Jesus — stencilled on their wrists.

“All my life I thought about tattoos, and I thought they were ugly — you know, red and green and all these weird things.” said Andrews, standing next to her daughter, their wrists covered in bandages after getting their tattoos.

“But to have a symbol of Jesus on me, that’s my stamp — who I am — it just seemed the right thing to do. And then we decided to get matching tattoos.”

The pair, on their final day of a weeklong visit to the Holy Land, had wandered into Razzouk Tattoo, where Christian pilgrims have sought out the family’s expertise for 700 years. 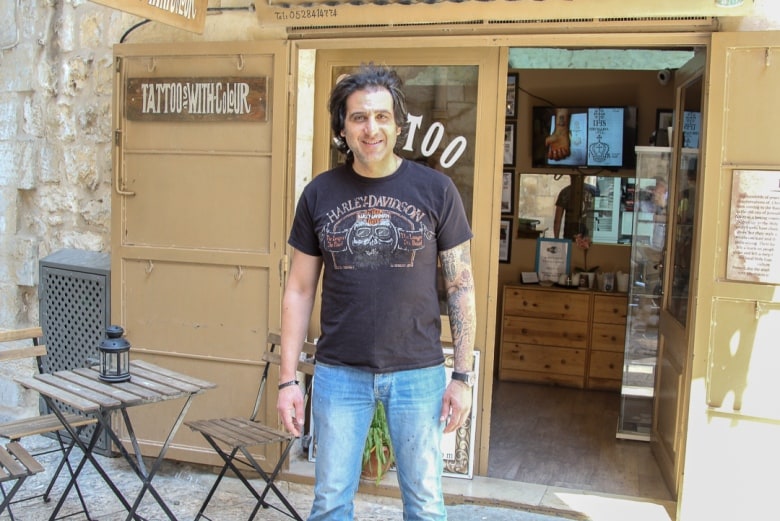 Wassim Razzouk outside his family’s tattoo parlour in Jerusalem. Pilgrims have turned to the family for their artistry and expertise for hundreds of years. (Derek Stoffel/CBC)

Wassim Razzouk, 45, is the 27th generation of his family to illustrate the bodies of people from around the world.

“For a lot of pilgrims, their visit to the Holy Land changes them in a way and leaves a mark on their soul,” Razzouk said, “so that they want to leave a mark on their body as well, to remind them — as well as to show to others — that they have done their pilgrimage.”

The Razzouk family’s history of tattooing dates back to the 14th century in Egypt. They moved to Jerusalem in the 17th century, with each generation handing down the artistry to the next.

The family’s storied tale is told on the walls of the shop, where clients can view photographs of Razzouk’s latter-day forebears and their work as they await their turn in the chair where they will get the proof of their journey to Jerusalem in ink. 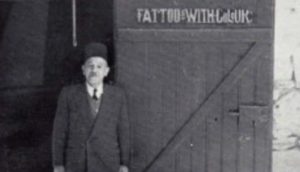 While clients can choose any design they want, most request patterns that the family designed generations ago, including some of the most popular compositions, such as the Jerusalem Cross.

“We have changed our methods and our tools that we use,” Razzouk said during a recent morning lull in business. “However, the designs that we use are still the old designs, the hundreds-of-years-old designs, that are carved in wooden blocks” and used as stencils for the tattoos.

The faithful from around the world flock to Jerusalem’s Old City, where Christians, Jews and Muslims visit and worship. Some of the holiest sites in Christianity and Judaism, as well as the third holiest in Islam, are located within the stone walls that encircle the area.

Casandra Curie and her husband Joseph, also from Indiana, fulfilled a lifelong dream as Orthodox Christians by recently visiting Jerusalem and other holy sites in the Middle East. 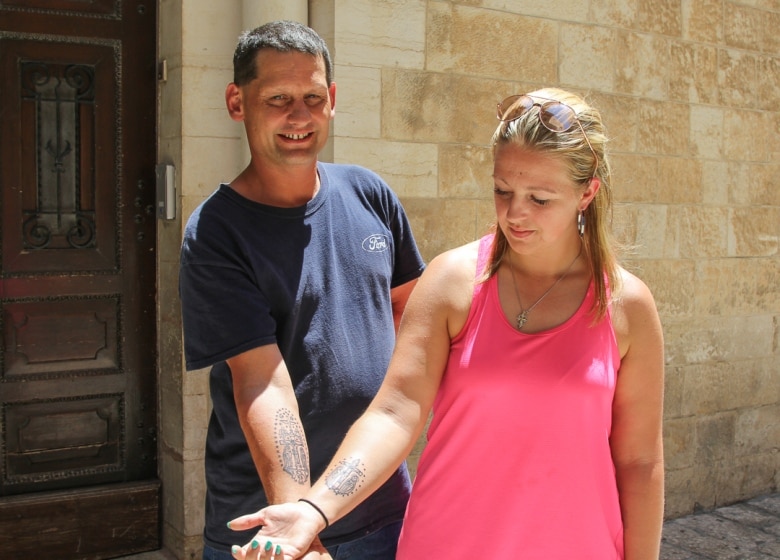 Joseph and Casandra Curie show off their tattoos, a day after receiving them on a trip to Jerusalem. (Derek Stoffel/CBC)

When they thought about how to commemorate their special journey, the choice, they said, was easy. Casandra smiled broadly as she pointed to an image of Jesus on the Cross, inked on her arm the day before.

“It holds a lot of significance, just looking at it. We can we can buy something here and put it up on a shelf, but to have something always with you, on your body, it’s pretty powerful,” she said.

Tattoos have a long history with several different Christian communities throughout the Middle East. Many Coptic Christians in Egypt tattoo their children with small crosses.

It’s believed that some Copts with cross tattoos have been targeted and killed, by Islamic militants in Egypt. The Christian community there has been targeted in recent years by a group linked to ISIS that views the Copts as non-believers. 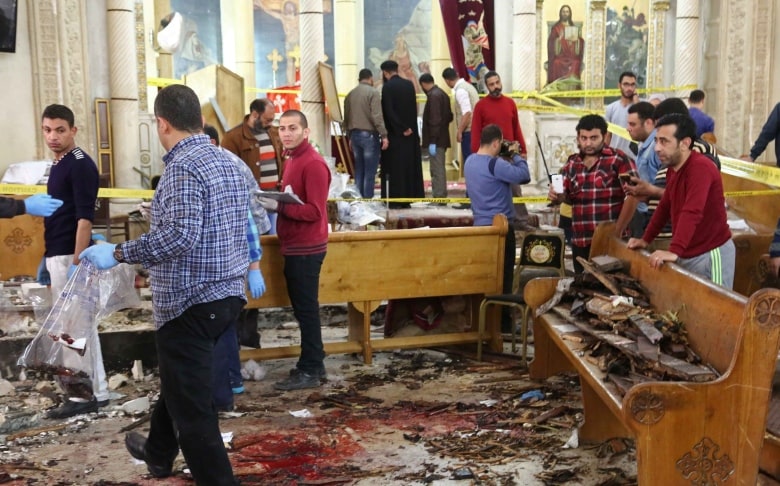 Egypt’s Coptic Christian community has been attacked several times by Islamic militants in Egypt, including this bomb blast at a church in Tanta on Palm Sunday last year. (Stringer/AFP/Getty Images)

Karen Andrews, from Indiana, said part of the reason she got her fish tattoo was to stand with the Copts, who have been persecuted for their faith.

“This means I have a Jesus mark on me, and I’m going to stand and not be ashamed, that that’s who I am. If it means my life, it means my life. Because he gave his for me.”

As Wassim Razzouk carefully guided his needle over the arms of a client, he reflected on his youthful indifference to the family business.

“I was not into tattoos” while growing up, Razzouk said. His grandfather and father relied on more crude tools of the trade, often a long wooden stick with thick needles attached to it. He was turned off by the unsanitary nature of the business years ago. 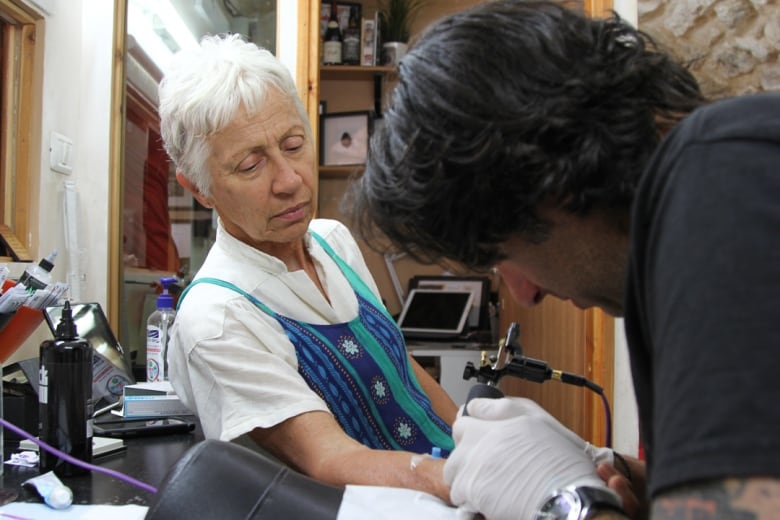 Wassim Razzouk tattoos a design of a fish, a Christian symbol linked to Jesus, on Karen Andrews. (Derek Stoffel/CBC)

But then he began to read about the incredible history of his family’s tradition of marking pilgrims after a spiritual journey, which he said “made me think twice.” So he modernized the shop and has been tattooing for a decade now.

And he’s not worried about the ink drying up as he gets older.

“Fortunately for me, I don’t have to go through what my father went with me, that I have to convince my sons.”

Razzouk’s second son, who’s 15, has expressed interest in learning the art of tattooing and has undertaken his first designs — including a tattoo on his father.

“So he will be generation number 28 to continue the family history, the family tradition.”

Derek Stoffel is the Middle East correspondent for CBC News. He has covered the Arab Spring uprisings in Tunisia, Egypt and Libya, reported from Syria during the ongoing civil war and covered the Israeli and Palestinian conflict. He has also worked throughout Europe and the U.S., and reported on Canada’s military mission in Afghanistan.