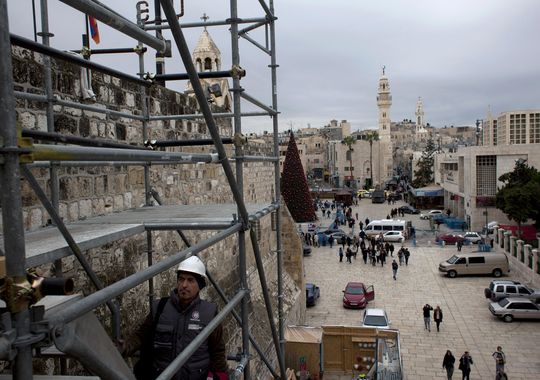 In this Tuesday Dec. 10, 2013, photograph, tourists walk around the Church of the Nativity in the West Bank city of Bethlehem. Wrapped in scaffolding, the basilica is having a much-needed facelift after 600 years.(Photo: Nasser Nasser, AP)

When Pope Francis visits Bethlehem in May he will see scaffolding covering the roof of the Church of the Nativity. It may be an eyesore, but it symbolises a rare show of unity among rival Christian faiths that are working together to restore the ancient basilica.

Built in the fourth century by the Roman Emperor Constantine and restored by Justinian after a fire in the sixth century, the shrine over the cave where Jesus is believed to have been born is undergoing a major renovation.

The project, which will see the entire church restored, began last September and is expected to cost 15 million euros ($20 million).

Following a historic agreement between the Palestinian Authority and the three churches that administer the site in an uneasy partnership, repairing the roof was designated as a priority.

Its rotting rafters, each weighing 20 tonnes, have not been repaired for the past 200 years.

That task, at a cost of 1.9 million euros, was entrusted to a family firm in Italy that specialises in the preservation of ancient structures.

Marcello Piacenti, leader of the Italian-Palestinian renovation team, said that, “damaged by fungus and damp, the wood fractures easily in places.

“The project is about preserving what can be preserved in the best way possible, such as the beam of the central nave,” he says.

“We will reuse the roof timber; 80 to 90 percent of the roof will be preserved.”

The rest of the wood — a matched supply of 300- to 400-year-old wood of the same colour and density as the existing beams — arrived from Italy last month.

The oldest beams date to 1470 when the Franciscans, the Roman Catholic Church’s guardians of holy places, brought from Venice a shipment of larch, a weather-resistant resinous wood.

Some 400 years later, the Greek Orthodox Church refurbished most of the roofing with Anatolian oak, similar to Lebanese cedar, another species native to the region that was used prior to 1300.

“Between the sheets of (roofing) lead and the timbers, we are going to put a waterproof felt which will guard against moisture and heat,” Piacenti said.

Work on the roof also involves ensuring the protection of the basilica’s magnificent Crusader-era mosaics and mediaeval frescoes, which will be restored at a later stage.

The first phase is to be completed by September.

Father Stephane Milovich, a Franciscan and former caretaker at the church, says it has turned out to be a blessing that the project is getting under way only now, as a cooperative venture among his order, the Greek Orthodox and the Armenian churches.

“A century ago the Greeks, the Armenians and the Franciscans wouldn’t have cooperated,” he said. “We have a building which has not changed, which is why we must save it.”

For Milovich, the basilica is a shared heritage for all of the Holy Land’s churches.

“We have a common creed, a common faith. We have a church crying out for unity instead of division,” he says.

In June 2012, the UN cultural body UNESCO overrode Israeli and US objections to urgently grant World Heritage status to the Church of the Nativity and its pilgrimage route.

Bethlehem lies in the Israeli-occupied West Bank, and recognition of the site was a diplomatic victory for the Western-backed Palestinian Authority, which is playing a leading role in the restoration programme.

“The Palestinian National Authority intervened with the blessing of the three churches,” said Ziad Bandak, head of the presidential commission for the renovation. “The churches are cooperating very well with us.”

The roof restoration is being funded by the Palestinian private sector and the Palestinian Authority, which is contributing 740,000 euros ($1 million). The rest is made up by donations from the Vatican, Hungary, France, Greece and Russia.

“It is a sacred church which has seen many upsets over the centuries: wars, earthquakes, as well as the Israeli siege of 2002, from which you can still see the marks made by bullets, shrapnel and tear gas grenades,” Bandak says.

He was referring to a dramatic incident in which dozens of Palestinian militants pursued by the Israeli army took refuge in the church, trapping scores of clerics and others inside for 39 days before agreeing to give themselves up and be exiled.

“We are here to stay,” Bandak adds with a smile. “It’s as if my family was babysitting the Virgin Mary.”