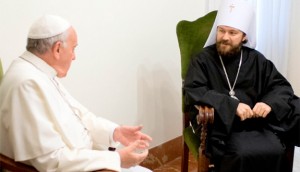 Pope Francis meets with Metropolitan Hilarion of Volokolamsk, head of ecumenical relations for the Russian Orthodox Church, during a private meeting at the Vatican Nov. 12, 2013. (CNS photo/L’Osservatore Romano vi a Reuters)

Metropolitan Hilarion Alfeyev, the “foreign affairs minister” of the Russian Orthodox Church, is, as George Weigel observed recently in First Things, a talented man, “charming and witty.” However, the gifted Hilarion, Weigel rightly noted, “does not always speak the truth.” Hilarion is rather like the Energizer Bunny: he goes on and on and on repeating tirelessly whatever pernicious propaganda the Russians want to spread. He has three channels to choose from: tired and outright lies about Ukrainian Catholics, repeated ad nauseam for over a decade now; useful if rather vague calls for Christians to co-operate in addressing the social ills of our time (same-sex marriage, divorce, abortion); and tendentious distortions of his own Orthodox tradition, particularly her ecclesiology. It is the third I wish to address.

Earlier this month, the metropolitan gave a speech at St. Vladimir’s Orthodox Theological Seminary in Yonkers, New York, about primacy in the Orthodox Church and in the Orthodox-Catholic dialogue. Since I’ve written the most wide-ranging, up-to-date, and comprehensive survey on both topics—Orthodoxy and the Roman Papacy (University of Notre Dame Press 2011)—I was vexed at the ignorance and distortions on display in the metropolitan’s essay. It is absurd, frankly, that he cannot even relay his own Orthodox tradition faithfully and that it fell to me, lowest of the low (for I am a Ukrainian Catholic—one of those horrible old “Uniates” that Alfeyev is forever denouncing), to more faithfully represent and adequately describe the Orthodox tradition than he himself has.

Now, to be sure, I do not suffer from delusions of grandeur and imagine that everyone has eagerly devoured my book, treating it like some Delphic oracle revealing the way to Christian unity. But it has been lauded by many Orthodox for its faithful, wide-ranging, and comprehensive survey of Orthodox positions in all their diversity. For the Orthodox do not speak with one voice on these matters, and they do not speak in one place, either. I gathered dozens of articles and books, most from very obscure places, and put them into one sweeping chapter, which had never been done before. As Fr. John Jillions, a scholar and the Chancellor of the Orthodox Church of America, said to me quite sincerely and gratefully, “At the very least your book will be useful for telling us Orthodox what we say and think!”

Had Hilarion read the book, he could have saved himself the embarrassment of uttering such howlers in New York as this:

This is the old mythology, never accurate in the first place, that sees the West as all papal and monarchical, and the East as all patriarchal and synodical. Like all stereotypes, it distorts. For the plain facts are that there is a long history of robust synodality in the Church of Rome going back to the earliest centuries of her history, and there is a long history of Eastern Churches attempting to be heavily centralized and run not in a synodal manner but in a manner that some Orthodox themselves have confessed to be “quasi-papal.” The clearest recent example of a super-centralized Orthodox church run on quasi-papal lines is Alfeyev’s own Russian Church, whose 1945 statutes gave the patriarch of Moscow (for political reasons insisted upon by Stalin) powers that popes of Rome could only dream about. I document all this in great detail in my book. For Alfeyev not to acknowledge any of this makes it clear that his treatment of primacy is grossly tendentious and thus must be dismissed as inaccurate and unreliable.

But it gets worse. Referring rather sweepingly and positively to “Orthodox….polemics,” the metropolitan sums these up as arguing that “in the Universal Church there can be no visible head because Christ Himself is the Head of the Body of the Church.” He recognizes that some Orthodox do not subscribe to such a view, naming the (safely dead) Fr. Alexander Schmemann, former dean of St. Vladimir’s. Tellingly, the metropolitan fails to mention the most important Greek Orthodox theologian alive today, Metropolitan John Zizioulas, who is Orthodox co-chair of the international Catholic-Orthodox dialogue and has argued in favor of universal primacy—as the majority of modern Orthodox theologians also do—exercised in a synodal manner. Zizioulas, moreover, has rightly insisted that universal primacy requires universal synodality, and one cannot speak intelligently about one without the other. Alfeyev’s failure to even mention Zizioulas strikes the reader as thin-skinned and perhaps even motivated by envy—there can be only oneprima donna in this town, and c’est moi.

Hilarion next makes another spurious claim:

The notion that a supreme hierarch for the Universal Church is a necessity has been approached from different angles over the last fifty years, but invariably the consensus among the Orthodox is that primacy as expressed in the Western tradition was and remains alien to the East. In other words, the Orthodox are not prepared to have a pope.

Current modes of exercising the papacy may indeed remain “alien to the East” in broad measure, but the second sentence here is, as my book’s survey of twenty-four Orthodox scholars shows, completely bogus. Again and again, modern Orthodox thinkers have recognized that there is a role for the papacy, that they are prepared to have a pope under certain circumstances, and that the papacy, when exercised properly, is a gift and a blessing for all Christians, including the Orthodox! Indeed, the late Ukrainian Orthodox Archbishop Vsevolod of Chicago bluntly stated, in a 1997 address at Catholic University of America, “the Church needs the Roman primacy.”

There is more tiresome nonsense: Hilarion ties up his piece by referring to the statement of the Rusian Church about primacy, adopted on December 26, 2013 (which I debunkedin this CWR piece), where it is claimed that“primacy in the Universal Orthodox Church…is the primacy of honor by its very nature rather than that of power.” There are few phrases more vexatious to me than “primacy of honor.” More than twenty years ago now, the widely respected historian Fr. Brian E. Daley, SJ, in an article—““Position and Patronage in the Early Church: The Original Meaning of ‘Primacy of Honour’”—published in Journal of Theological Studies, one of the most prestigious theological journals in the anglophone world, showed that the notion of “primacy of honor” in the early Church did not mean an absence of authority. Such primacy, in fact, was honored precisely because it was authoritative, and the one exercising that primacy could and did call people to account, where necessary coercing and compelling obedience in various circumstances. The primate of “honor,” then, clearly is not a useless avuncular fellow—able to smile and wave and nothing more. He had real teeth—or, to use Alfeyev’s word, “power”.

Why, then, such a shoddy speech? Was Metropolian Hilarion Alfeyev just being lazy in not reading widely recognized landmark scholarship such as Daley’s article (to say nothing of my book)? Or was he setting out to distort the record and ignore evidence that does not fit his (and broadly Russian) prejudices? The inescapable conclusion is that he cannot even be relied upon to faithfully, truthfully, and accurately represent his owntradition. If he repeatedly tells lies about Catholics in Ukraine, and is now caught out uttering distortions about his own Orthodox tradition, how can this man be called upon to reliably discuss anything?

If all his invitations to various conferences—Catholic, Protestant, and Orthodox—do not now dry up, then the fault is not with him but with us for our willingness to indulge duplicity. We have made ourselves accomplices in this man’s self-destructive utterances by regularly giving him a platform from which to lie. As Christians, we must surely recognize that it is itself a sin to aid and abet another in actions we ourselves know to be sin. Out of genuine charity for Metropolitan Hilarion, it is time that we no longer seek him out or listen to him. Let him never again be given an invitation to a Vatican event of any kind; let no more honorary doctorates be conferred on him; let him be denied all future speaking engagements and photo ops with Billy Graham, the pope, or the archbishop of Canterbury. Let us pray that, being young enough, perhaps he may yet amend his ways so that truth and honesty might light the difficult but vital path of Catholic-Orthodox dialogue.

Dr. Adam A. J. DeVille is Associate Professor and Chairman of the Department of Theology-Philosophy, University of Saint Francis (Fort Wayne, IN) and author ofOrthodoxy and the Roman Papacy (University of Notre Dame, 2011).
[subscribe2]
Share. Twitter Facebook Pinterest LinkedIn Tumblr Email
Previous ArticleBarbarism 2014: On Religious Cleansing by Islamists
Next Article Managing our time: An Orthodox perspective