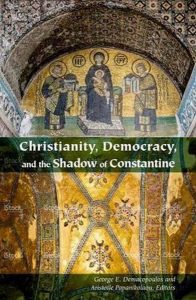 It is with great pleasure that the Orthodox Christian Studies Center shares the news that Christianity, Democracy, and the Shadow of Constantine has been honored with the Alpha Sigma Nu award. This award, cosponsored by the Association of Jesuit Colleges and Universities and Alpha Sigma Nu (the Jesuit Honor Society), is given once every three years to scholarly books in the humanities that stand out as “scholarship at its best in Jesuit education.”

Christianity, Democracy, and the Shadow of Constantine (Fordham University Press, 2016), edited by Center Co-Directors George E. Demacopoulos and Aristotle Papanikolaou, is the fruit of the Third Patterson Triennial Conference. The book examines some of the “identity construction” that occurred in Eastern Europe after the collapse of communism, when the new order forced traditionally Eastern Orthodox countries to grapple with the relationship between Christianity and liberal democracy.

Using the Church to Divide East from West

Demacopoulos and Papanikolaou’s book examines Catholic and Orthodox Christianities’ influence on politics. The book includes several critiques on the influence of Western liberalism in the Orthodox East. Essays examine how some governments attempt to use that influence to divide the religions for geopolitical purposes.

“It’s not completely unprecedented, but it’s rare that this kind of award would go to an edited volume rather than a monograph,” said Demacopoulos, the Fr. John Meyendorff & Patterson Family Chair of Orthodox Christian Studies. “I think the judges recognize the significance of this kind of endeavor.”

Demacopoulos said most books that examine Christianity and the political world do so through the lens of Catholic and/or Protestant thought. Their book charts new ground in theological studies by bringing the history of the Orthodox experience into the conversation.

According to Papanikolaou, the Archbishop Demetrios Chair in Orthodox Theology and Culture, the book attempts to cut through much of the “identity construction” that occurred in Eastern Europe after the collapse of communism. The new order forced traditionally Eastern Orthodox countries to grapple with the relationship between Christianity and liberal democracy.

In the book, Catholic, Protestant, and Orthodox theologians reflect on the post-communist Orthodox world and on Western political theology.

“It offers conversation on all these different points of view,” said Papanikolaou. “While there are a lot of Orthodox Christians that are troubled by liberalism, that doesn’t mean the church should be used in the way of a political divide.”

The subject will be further explored at Nov. 1 at the Lincoln Center campus in a panel discussion titled, “Trump, Putin and Traditional Values.”

The Alpha Sigma Nu Book Awards are given annually to outstanding publishing contributions by faculty and administrators at Jesuit colleges and universities. It is co-sponsored by the Association of Jesuit Colleges and Universities (https://www.alphasigmanu.org/awards/asn-book-awards/winners)