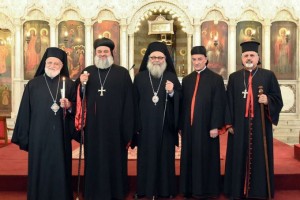 The five patriarchs of Antioch at their June 8 meeting in Damascus. Credit: Greek Orthodox Patriarchate of Antioch via Facebook/Antiochpatriarchate.org

Damascus, Syria, Jun 10, 2015 / 12:08 am (CNA/EWTN News).- The five Christian patriarchs of Antioch met in Syria on Monday, calling for peace in the Syrian civil war while reaffirming that Christians have a place in the Middle East.

The Christian leaders described themselves as an authentic people of the land, who are “deeply rooted in its earth that was watered by the sweat of our fathers and grandfathers, and we confirm more than ever that we are staying.”

“We do not condemn those that choose to leave, but we remind Christians that steadfastness in faith often entails a great deal of tribulation,” they said in a statement following the June 8 meeting. “We call on everyone who claims to have an interest in our fate to help us to remain.”

The five Catholic and Orthodox patriarchs of Antioch attended the meeting, held in Damascus at the headquarters of the local Greek Orthodox archdiocese. The apostolic nuncio to Syria also attended, Reuters reports.

The annual meeting is normally held in Lebanon, but the churches agreed to meet in Damascus so as to reassure all Christians of the region, according to Asia News.

The Syrian civil war and the conflict in Iraq have caused massive casualties and life disruptions for Muslims and Christians alike. Millions of Iraqi and Syrian refugees have been displaced from their homes.

The rise of the Islamic State has also threatened many Christians and Muslims.

The patriarchs told the international community “to take its responsibility and to stop the wars in our land.” They stressed the need for peace and advocated the return of those who have been abducted or displaced.

They also called for better relations with Muslims. Any extremist forms of Islam must be countered by teaching “a culture of openness, peace and freedom of belief,” they said.

They also noted the centrality of the Palestinian cause in the Arab world, and the “double standards” of the international community.

The statement encouraged Lebanese to be loyal to Lebanon, and to work for the election of a president. Lebanon’s presidency has been vacant since May 2014, due in large part to political divisions over the Syrian war.