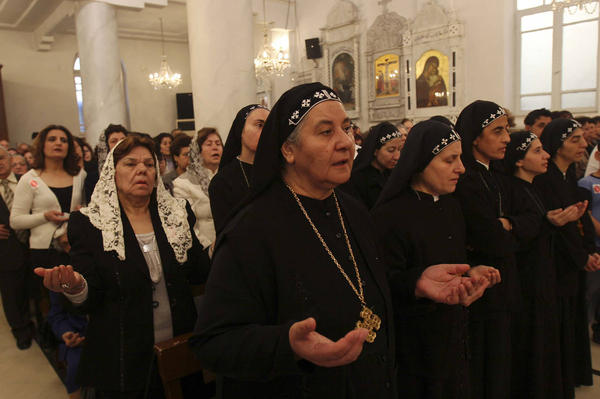 Orthodox faithful pray during a mass held at the Syrian Orthodox Church on Sunday, April 19, 2009 in Damascus, Syria to celebrate Easter according to the Orthodox calendar. Orthodox Christians celebrate Easter several weeks after observances by other Christian denominations. Christians pose around 12 percent of Syria’s 20 million Sunni-majority inhabitants.(AP photo/ Bassem Tellawi).

The uprising in Syria began as a peaceful protest for diversity and democracy during the Arab Spring of 2011. But it has turned into a holy war between Shiite and Sunni sects of Islam — with Christians and other minorities caught in the middle.

The highest profile Christian victims of the civil war are two Orthodox bishops kidnapped in late April, and there is still no official word as to the whereabouts or fate of the two clerics, who were abducted as they returned from a humanitarian mission in Turkey.

“We are deeply worried for the lives of Archbishop Mor Gregorius Yohanna Ibrahim of the Syriac Orthodox Church and Bishop Boulos Yazigi of the Greek Orthodox Church,” said Katrina Lantos Swett, chairwoman of the U.S. Commission on International Religious Freedom, in a statement on May 21, according to The Guardian. “The United States and the international community must leave no stone unturned to free the archbishops and halt sectarian violence.”

U.S. Congressmen Chris Van Hollen, D-Md., and Frank Wolf, R-Va., recently wrote in The Christian Science Monitor that a bipartisan group of their colleagues is urging the State Department to make freeing the bishops a top priority because it is key to bringing peace in the region.

“At stake are not just the lives of two religious men, or even the fate of the Syrian Christian community, but the fate of any hope of tolerance and pluralism in the Syrian endgame — and perhaps in the region as a whole,” they wrote in an op-ed piece.

Christians are caught in the middle of the sectarian battle, and are not sure whom to trust — the oppressive regime of Syrian President Bashar al-Assad, which is supported by Shiites but under which Christians have been able to thrive in Syrian society, or the Sunni rebels who want to overthrow Assad with the help of radical Islamist groups whom Christians fear as their persecutors.

“Our fear is that Christians continue to leave the country in search of a decent life,” said Melkite Catholic Archbishop Jean-Clement Jeanbart of Aleppo, according to The Vatican Today. “One suffers for lack of goods, fuel, electricity, sometimes for food. But what makes us suffer most is to see that the future gets darker and darker. The future for us Christians and for all Syrians can only be based on full citizenship, freedom, dignity and respect for others. Otherwise what will happen to us?”

Pope Francis on Sunday urged the faithful to pray for Syria and appealed to the “humanity” of the kidnappers to release their hostages. Both sides of the Syrian civil war have accused each other of kidnapping the bishops.

The Shiite-Sunni division dates back to the death of the Prophet Muhammad in the seventh Century. “While the two groups are similar in many ways, they differ over conceptions of religious authority and interpretation as well as the role of the Prophet Muhammad’s descendants, among other issues,” states the Pew Forum on Religion & Public Life.

In a global survey of Muslims, Pew found that large majorities of Muslims in South Asia and the Middle East-North Africa region identify as either Shia or Sunni, while others in the world identify as simply Muslim.

That explains why the sectarian fighting in Syria between the Sunni and Shiite factions of Islam is spilling over into other countries in the region, as The New York Times detailed over the weekend.

“The Syrian civil war is setting off a contagious sectarian conflict beyond the country’s borders, reigniting long-simmering tensions between Sunnis and Shiites, and, experts fear, shaking the foundations of countries cobbled together after the collapse of the Ottoman Empire.”

The Times reported, for example, that as Shiites pour into Syria to join the fight out of a sense of religious duty, attacks on Sunni mosques have resumed in Iraq.

While rooted in religious differences, the dispute also has political implications.

“A pure war over religious doctrine is rare in history, and that may hold true in this case,” stated an editorial in the Monitor. “Much of the struggle in Syria is a geopolitical contest between Iran and Saudi Arabia for influence in the region.”

The editorial calls on Muslims to recognize what they have in common instead of their differences, and for outside nations to support negotiations to end the strife.

“As more outside forces intervene in Syria, the more the war becomes a ‘clash within a civilization,’ or intra-Muslim struggle. But as more countries recognize this dangerous course, the more they must back talks to end it. Holy wars are never holy.”

Time magazine analyzed the political maneuvering by powers Russia and the United States in attempts to bring both sides of the conflict to the negotiating table. Rebel leaders said they would not participate, following reports that Russia was to deliver weapons to the Syrian government.