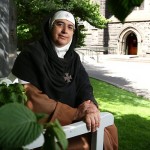 THE mother superior of a 1500-year-old monastery in Syria warned yesterday during a visit to Australia that the uprising against Bashar al-Assad has been hijacked by foreign Islamist mercenaries, with strong support from Western countries.

Mother Agnes-Mariam de la Croix was forced to flee to neighbouring Lebanon in June when she was warned of a plot to abduct her, after she revealed that about 80,000 Christians had been “cleared” by rebel forces from their homes in Homs province.

She described on the website of the Greek-Melkite Catholic monastery of St James, the church she rebuilt 18 years ago after discovering it in ruins, how Islamist rebels had gathered Christian and Alawi hostages in a building in Khalidiya in Homs. Then they blew it up with dynamite and attributed the act to the regular army.

Mother Agnes-Mariam plans to return to Syria soon, to support the Mussalaha (Reconciliation) community-based movement, which rejects sectarian violence and includes, she said, members of all ethnic and religious communities who are tired of war.

Rallies with the theme “Hands Off Syria” are scheduled for lunchtime tomorrow in Sydney, Melbourne, Brisbane and Hobart, and will involve a wide variety of groups from the country.

Mother Agnes-Mariam, 60, speaks five languages fluently and spent 22 years as a contemplative Carmelite nun in Lebanon, where she was born. Her late father was a Palestinian refugee who fled Nazareth in 1948 when the state of Israel was established.

She told The Weekend Australian, while visiting Melbourne yesterday – between meetings with Catholic Archbishop Denis Hart and state parliamentarians – that after the uprising began, she had noticed growing numbers of “aggressive, armed gangs which wished to paralyse community life, abducting people, beheading, bringing terror even to schools”.

Slowly these groups became identified: some are recruited by and affiliated with al-Qa’ida, some have a Muslim Brotherhood background, some are attached to other Islamist factions. Only about one in 20 of these fighters is Syrian, she said. The rest come from places ranging from Britain to Pakistan, from Chechnya to North Africa. “Many have fought in Iraq, some also in Afghanistan,” Mother Agnes-Mariam said. “Now their cause is being recycled to kill Syrians.”

The two million Christians in Syria – which contains the world’s first church – “are sharing Syria’s fate”, she said.

“But as a minority, they are more vulnerable. They have no army. They are caught, like the filling in a sandwich.”

Her own community of nuns at St James has been mostly trapped in the monastery for 18 months.

In the beginning, she said, the uprising embraced values including freedom and democracy. “But it steadily became a violent Islamist expression against a liberal secular society.”

She described “a hidden will to empty the Middle East of its Christian presence. We don’t know why. We have always been the peaceful catalyst bringing diverse communities together.”

The foreign Islamist threat, she said, “is a terrible one for all the minorities. Do we stay and become second-class citizens? Where do we go? We shouldn’t have to accept this in the 21st century.”

Mother Agnes-Mariam said some Westerners, “even Christians”, were insisting that all Syrians enter dialogue with the Islamist insurgents to form common cause, tolerating the imposition of “a kind of Islamic will” – and criticising her as a controversialist. “But what is happening now is against the uprising,” she said. “There is a way to implement the choices of the Syrian people – by giving them back self-determination and freeing them of this massive foreign interference and this media instigation for violence.

“There are powerful seeds inside the Syrian people for reform through dialogue and negotiation.”