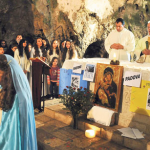 The thousands of Christians in Turkey began their Christmas celebrations on Dec. 24, and several religious ceremonies were held in different churches as political figures like the president and prime minister issued holiday messages.
İstiklal Street was the center of activity where Christians gathered together to spend the evening. Some joined parties while many others went to church to pray.

Many Catholics celebrated Christmas with a religious service on the night of Dec. 24 at St. Antuan Church on İstiklal Street. The evening Christmas Eve service commemorates the fact that Jesus was born at night, more than 2,000 years ago.

Along with Christians, Muslims also visited the church that evening to watch the service. After singing hymns, bread spread with butter and marmite was distributed to visitors.

On Friday, President Abdullah Gül issued a Christmas message. Emphasizing that traditions and customs that have evolved over the centuries tie citizens together, Gül said in the message that “our values such as solidarity, good faith and compassion that also reflect the spirit of Christmas form the most valuable part of our common heritage. In this sense, I wish our citizens of all Christian traditions and the entire Christian world a Merry Christmas, lots of happiness and much success.”

Another ceremony was held at the Fener Greek Patriarchate on Sunday morning, Christmas Day.

Guests took photo of themselves in front of the decorated Christmas tree in the garden.

Prime Minister Recep Tayyip Erdoğan said on Saturday that “we have lived on this soil together by sharing a common destiny and history and displaying tolerance, respect and understanding for each other.”

In his Christmas message, Erdoğan said the residents of Turkey continue to live together as equal citizens and in unity.

“I believe that the spirit of unity and the climate of mutual love and respect will get stronger in the future. With these thoughts, I wish all Christians a happy Christmas in tranquility and in peace,” Erdoğan said.