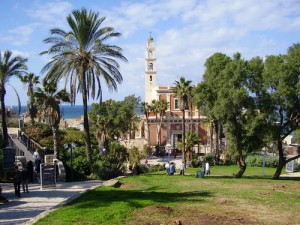 JNS.org – Israeli Arab Christians in Jaffa marked the beginning of the Christmas season in the Holy Land with an annual Christmas tree lighting celebration earlier this week.

At the gathering in the ancient port city adjacent to Tel Aviv, men dressed up as Santa Claus met children, sang Christmas carols and lit fireworks.

Orthodox Christian leaders also addressed the crowd of Jewish, Muslim and Christian onlookers, using the occasion to promote unity between the three faiths.

“This is the best example for all the citizens of Israel to see how people can do things that we can really take people from all the natures, Jews, Muslims and put them together. This is the tree. I wish that this can bring peace to our land, to Israel, to Christians, Muslims and Jews,” said George Mansour, head of the Orthodox Christian scouts in Jaffa, the Jerusalem Post reported.