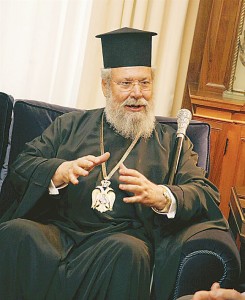 BOSTON, MA – His Beatitude Archbishop Chrysostomos of Cyprus told TNH that he blamed the current Cypriot government of Demetris Christofias for the economic crisis as well as the political dead ends. “I believe that the government didn’t do its duty. It let things to roll over on their own.” Chrysostomos added that “I can tell you that the government worked negatively and that is why we have come to this point. At any rate now, it’s leaving in two months and we are going to have a new government.”

The prelate revealed that he is going to take initiatives towards the solution of the Cyprus issue. “I believe now is the hour of the Church. I have already spoken with the prime minister of Greece during the memorial Service of the late president of Cyprus Tassos Papadopoulos and we have agreed to meet soon in order to cooperate and achieve a solution. I think the prime minister is ready to agree with me. Of course, we are going to discuss all the details. When the new President of Cyprus is elected we all sit down and work towards the solution of the problem of Cyprus.” The archbishop added that “I will assume a pivotal role and I press the issue because 40 years of Turkish occupation are too many.

“I believe that many mistakes were made on our behalf. Of course, we have against us a Turkey which wants to invade the entire Cyprus because this is the Turkish politics. Our leadership didn’t have a clear vision for our country. The Cypriot people are disappointed at this moment and it pains for the course our country has taken. The people are disheartened towards its political leadership because it didn’t do its obligation.”

Chrysostomos plans to visit the United States in 2013. He said that “this is the first time that I am thinking seriously about making a visit because I believe that the next five years we all should work together in order the issue to be resolved in the best possible way for all the peoples of the island the Turkish-Cypriots, Greek-Cypriots, Maronites, and other minorities who dwell in Cyprus.”

He believes that “the New Year will be difficult primarily in terms of the economy and secondly because of the national problem, because I don’t think with Erdogan and Davoudoglou in charge of the leadership of Turkey we can expect anything good. We Greek-Cypriots should assume initiatives and responsibilities. In terms of economics, I am optimistic because I think our people can live with less. There is a spirit of optimism and solidarity.” He explained that “when the Church took the lead and said it wouldn’t allow anybody to be hungry, the people supported us. They come to us daily bringing money, food, they have an authentic love and care for the others; for those who are in need.”

The Archdiocese has established a “public market” where people in need come and get their food items, he said.

Chrysostomos expressed a degree of optimism. He said “our people in Cyprus and in Greece have a high educational level. We have to set high goals. The leadership should lift the people to heights and in ethic awareness. I believe that Hellenism has the dynamism and the potential to achieve many things.”

Chrysostomos praised the Cypriot-American and the Greek-American Communities and sent to all his best wishes through TNH. He said “it is a very dynamic community in the United States, and can offer a lot to the small nation of Cyprus” and added that “Greece and Cyprus need the support of the Greek-American Community at this moment.” He also said “I wish each and all of you collectively in the United States a healthy and prosperous New Year blessed by God.”