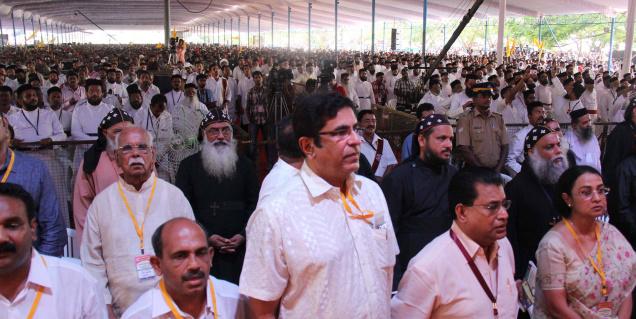 A view of the audience at the centenary celebration of the Catholicate organised by the Malankara Orthodox Syrian Church in Kochi on Sunday.

The Catholicos, Baselios Marthoma Paulose II, who made the announcement at the launch of the centenary celebrations here on Sunday, said the work would include building houses for the homeless members of the church, meeting the wedding expenses of widows’ daughters, providing education assistance and health insurance for the poor and relief to farmers in debt. Aid would be given for the treatment of cancer and heart diseases and also for dialysis, the Catholicos said.

In a veiled reference to the earlier split in the church, he called for peace and unity in the Syrian church. “We hold the same beliefs, and we should be in the same camp,” he said. He said that the Malankara Church was founded by St. Thomas the Apostle in AD 52 and hence the church was now celebrating the 1960 anniversary together with the centenary of the Catholicate.

A large number of religious, political, church and community leaders—including Mar Joseph Powathil, Mar Aprem, K.V. Thomas, Vellappilly Natesan and Tony Chammany—attended the public meeting. Tens of thousands of Orthodox church faithful from all over the State showed up. A huge rally was taken out in the city to mark the centenary. In view of the huge crowd expected to attend the meeting, the police had announced traffic regulation. However, there were disruptions of traffic on the key roads in the city.

The Catholicate of the Malankara Church was established in 1912. Murimattothil Ivanios Metropolitan of the Kandanad diocese was installed as the first Catholicos in 1912.