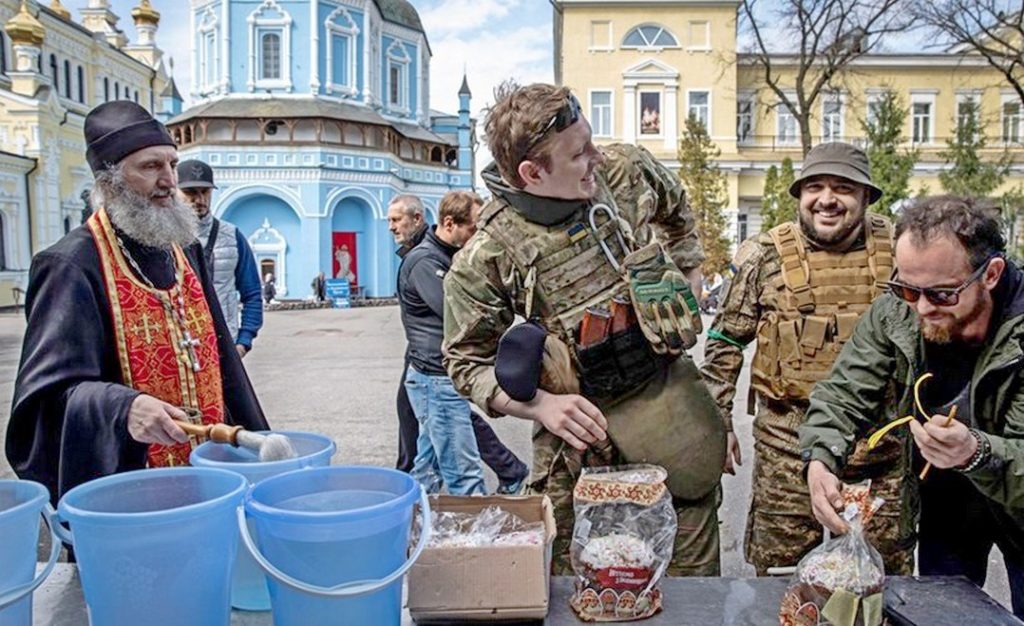 Ukrainian soldiers enjoy a break from the fighting to bring Easter food for a blessing in front of an Orthodox monstery in Kharkiv at the weekend. Credit: ALAMY

THE Primate of Ukraine’s independent Orthodox Church, Metropolitan Epiphany (Dumenko), has called for the removal of the Russian Orthodox presence in his country. His hardened stance was prompted by the refusal of President Putin to agree a truce for the celebration of Easter, and Patriarch Kirill of Moscow charge to the Russian people to make their country “invincible”.

“The Ukrainian state is fighting to protect its territorial integrity and defending its information space,” Metropolitan Epiphany said. “This is why we must also talk about protecting Ukraine’s Orthodox faithful from Russian influence. . . As long as the Moscow Patriarchate has a large structure here, it will give Putin hope that he enjoys support.”

Metropolitan Epiphany was speaking as Russian forces intensified their campaign in the south and east of Ukraine, and as the United Nations secretary-general, António Guterres, during a visit to Moscow on Tuesday, called unsuccessfully for ceasefire talks.

The Moscow Patriarchate’s position in Ukraine was a “canonical anomaly”, the Metropolitan said, and he warned that Moscow-linked Orthodox clergy wishing to join his independent Church would have to “atone for the guilt” of Patriarch Kirill.

The leader of Ukraine’s Greek Catholic Church, Major Archbishop Svetoslav Shevchuk, on Monday accused Russian occupiers of using captured factories as “concentration camps” for Ukrainians, and of employing execution, deportation, and forced recruitment into the Russian army. They were, he said, “dumping thousands of people” in mass graves at the besieged sea port of Mariupol. 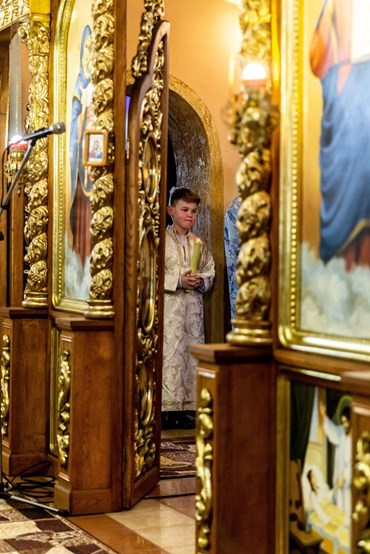 A server during the Easter Day liturgy in the Greek-Catholic church in Nadyby, Ukraine. The liturgy was held on Sunday morning, not at midnight, because of the military curfew. The church has served as a shelter for dozens of refugees from the Kharkiv, Donetsk, and Zaporizhzhia regions

ALAMYA server during the Easter Day liturgy in the Greek-Catholic church in Nadyby, Ukraine. The liturgy was held on Sunday morning, not at midnight, because of the military curfew. The church has served as a shelter for dozens of refugees from the Kharkiv, Donetsk, and Zaporizhzhia regions

“The attackers believed they could capture Ukraine in three days, but failed to grasp its people’s strength, resistance, and will to live in God-given freedom,” said Archbishop Shevchuk, whose Eastern-rite Church is in communion with Rome.

Russia rejected calls from Mr Guterres and other world leaders for a truce in the war, which has left tens of thousands dead and at least 12.3 million people internally displaced or seeking refuge abroad.

Fresh missile strikes were reported this week, however, on Ukraine’s central Poltava region, together with further shelling of Kharkiv, Mykolaiv, Kherson, Dnipro, and other cities.

Addressing Ukrainians on Monday, President Zelensky accused Moscow of grossly violating the Orthodox Easter spirit by continuing to attack his country’s population centres. “Russia was offered an Easter ceasefire — but the Orthodox world has seen Easter means nothing for the Russian invaders,” he said in a televised message.

“We will deal with everyone after our victory, seeing how they behaved during the war,” the politician told the RBC-Ukraine agency on Monday. “This war is a borderline situation, which tears away veils and shows who is who — whether patriots, or pro-Russian politicians. Society is able to see who is for Ukraine, and who has other intentions.”

And, in a commentary this week, the Religious Information Service in Ukraine said that the Moscow-linked Church remained, despite criticism, “one of the most powerful and effective public institutions providing humanitarian support for the Ukrainian army and displaced persons”. Its leader, Metropolitan Onufriy (Berezovsky), had invoked God’s blessing on Ukrainian soldiers at the start of the Russian invasion, he said.

Metropolitan Onufriy said last week that his Church was ready to organise an “Easter prayer procession” to the Azovstal industrial plant, in Mariupol, which is still holding out against Russian troops, to help to evacuate civilians and “remove wounded military personnel and bodies of the dead”.

This week, Pope Francis told an Argentinian newspaper that he had called off a possible visit to Kyiv and a projected June meeting with Patriarch Kirill in Jerusalem. Speaking to pilgrims in Rome on Sunday, he deplored the war’s escalation, and said that he was saddened that the “mortal roar of weapons” was being heard louder than “bells announcing the resurrection”.

Share. Twitter Facebook Pinterest LinkedIn Tumblr Email
Previous ArticleClergy Syndesmos of the Metropolis of Boston Sends Letter to Archbishop Elpidophoros on the Charter
Next Article What if the 9 Orthodox patriarchates got involved in the Ukraine-Russia war?