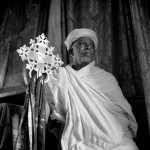 A priest sits before the curtains of an inner sanctum, which in every Ethiopian church houses replicas of the tablets of Moses, supposedly kept within the Ark of the Covenant and known as ‘tabots’. (Image credit: Ralph Bennett Crignola)

A small church in Aksum, Ethiopia, claims to have the Ark of the Covenant. It is written in Ethiopia’s ancient book of kings that the son of King Solomon and the Queen of Sheba (Menelik, conceived during a royal one night stand) brought the Ark from Israel. It is now kept at The Chapel of the Tablet at the Church of Our Lady Mary of Zion.

Many historians are not convinced about this account of the Ark coming to Aksum. They believe that it is simply propaganda to get people to accept Menelik’s lineage as rulers of the country. Others, including the patriarch of the Ethiopian Orthodox church, Abuna Paulos, disagree.

“It’s no claim, it’s the truth,” patriarch Paulos says. “Queen Sheba visited King Solomon in Jerusalem 3,000 years ago, and the son she bore him, Menelik, at age 20 visited Jerusalem, from where he brought the Ark of the Covenant back to Aksum. It’s been in Ethiopia ever since.” And that’s how most of Ethiopia’s Orthodox Christians see it, too.

Whether it is real will never be proven, as only one lifetime caretaker at a time is allowed to see it. So you won’t see the Ark in the article at Environmental Graffiti, but you will be able to read more about the Ark and the old church, which combines ancient traditions of Judaism with its more recent Christian beliefs mixed with some Muslim practices from the surrounding country. And you’ll see plenty of pictures of the church and its members. Link