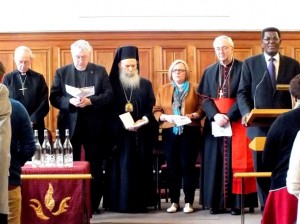 Churches Together in England (CTE)

Anglican, Catholic, Free Church, new church, Orthodox, Pentecostal. and other invited church leaders met together to pray with the Six Presidents of Churches Together in England in Westminster Central Hall on Friday, as the country prepares for a General Election. Open prayer from the Pentecostal tradition was followed by a sung Orthodox liturgy. The Archbishop of Canterbury led the Litany for Reconciliation from Coventry Cathedral and the Cardinal Archbishop of Westminster led Midday Prayer. All the Presidents in turn offered a reflection and prayers of intercession for the nation.

Hosted by the Methodist Westminster Central Hall and organised by Churches Together in England at the specific suggestion of the six CTE Presidents, the two hour prayer meeting was opened by the Pentecostal president, Bishop Eric Brown who said they were coming together as God’s people from different churches to pray for the nation in advance of the General Election and to seek God’s will.

Also in attendance were invited delegates of the 44 member churches and staff of Churches Together in England, from Orthodox to Pentecostal and charismatic. The prayer meeting was led by the six Presidents of Churches Together in England (CTE): The Archbishop of Canterbury, The Most Revd and Rt Hon Justin Welby; The Cardinal Archbishop of Westminster, HE Cardinal Vincent Nichols; The Free Churches Moderator, Revd Dr Hugh Osgood (represented by Revd James Breslin); The President for the Pentecostal Churches, Bishop Eric Brown The President for the New Churches, the Religious Society of Friends (The Quakers) and the Lutheran and German-speaking Churches, Billy Kennedy (represented by Linda Ward); The President for the Orthodox Churches, HE Archbishop Gregorios of Thyateira and Great Britain.

The presidents prayed that God would inspire the nation to discern the deep spiritual, moral and ethical challenges of our time and vote into office politicians who will build a fairer, more just nation for all citizens.

Speaking ahead of the prayer for the nation, The Revd Dr David Cornick, General Secretary of Churches Together in England said: “This is a very significant moment in the life our nation and the symbolism of the six CTE presidents praying together for the wellbeing of our nation as we move into the General Elections cannot be overstated. On behalf of all the churches in England our presidents, who are politically non-aligned, prayed that the government formed after May 7 will be one elected by the fullest and most discerning citizen participation.”