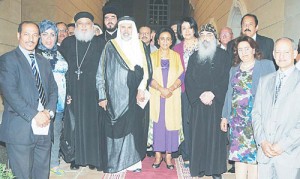 Sheikha Fariha (Center), Flanked On The Right By The Bahraini Ambassador To Kuwait And Head Of Egyptian Orthodox Church In Kuwait Bigol Al-Anba Bishoy On The Left

KUWAIT CITY, May 9: The Egyptian Orthodox Church in Kuwait held a reception on the occasion of the Egyptian Easter Season in honor of Sheikha Fariha Al-Ahmad Al-Sabah the President of the Kuwait Association for Ideal Family and the Goodwill Ambassador for Peace. Sheikha Fariha was honored in the presence of Rev Emmanuel Garib, representatives of various religious communities and social figures and prominent personalities among them was the Ambassador of the Kingdom of Bahrain to Kuwait Sheikh Khalifa bin Hamad Al- Khalifa.

During the event all those who addressed the gathering stressed on the importance of dialogue and cultural rapprochement between religions in order to ensure justice and peace. Saying Kuwait is a country which yearns for fraternal coexistence, love and peace, renounces sectarian wrangling and works to confront ignorance and aggression, the church leaders welcomed the climate of religious tolerance in Kuwait and praised HH the Amir, the government and the friendly people of Kuwait. Sheikh Khalifa stressed on the importance of intercultural dialogue and rapprochement to achieve peace and security for mankind.

He pointed out Kuwait is a land where dialogue for love and peace is renewed under the wise leadership of HH the Amir of Kuwait. Al-Khalifa recalled his country’s hosting of the tenth session of the Conference of Islamic-Christian dialogue on the basis of faith King Hamad bin Isa Al Khalifa attaches to the importance of dialogue in achieving peace among peoples of the world.

Sheikha Fariha Al-Ahmad called for staying away from sectarian clashes and aggravations and work together to counter ignorance and aggression in order to deepen the bonds of love and affection and peace in the country under the guidance of HH the Amir and the Crown Prince.

She expressed her delight in participating with the Christian counterparts on this occasion and said “I am very happy to attend such occasions which remove the barriers and obstacles among the heavenly religions which call for peace, love and tolerance and convergence of views.” The head of Egyptian Orthodox Church in Kuwait Bigol Al-Anba Bishoy said Kuwait is a pioneer of love and peace and lauded the wisdom of His Highness the Amir and his directives. He described the land of Kuwait as “fertile” for brotherly coexistence between religions.

He also praised the social role played by Sheikha Fariha in addition to coherence among persons living in this land and taking care of the Egyptian Christians and all Egyptians in the country. Member and a representative of the Council of Islamic-Christian Relations Riad Al-Kazimi conveyed his deepest congratulations and blessings to Pope Twadharos II, Pope of Alexandria and Patriarch Alkarazh Macarios, and wished him every success for all humanity and Egypt and its people progress, prosperity, security and safety.