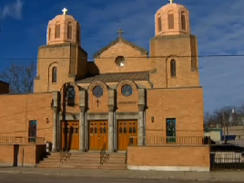 Police are looking for the thieves who broke into a Watertown, Mass. church and stole a safe, chalices, Bibles, and blessing crosses. / CBS

(CBS) BOSTON – Police are looking for the thieves who broke into a church a few miles from Boston and stole a safe, chalices, Bibles, and blessing crosses, CBS Boston reported.

Police say the thieves broke in the boiler room door in the basement, went up to the church office and ransacked it. They believe the initial motivation may have been the church’s 75 lb. safe, which was taken from the office, according to CBS Boston.

Father Demetrios Tonias is astonished anyone would ever break into a holy building.

“People donate this in memory of Papul – their grandfather or Yaya – their grandmother or other family members,” Fr.Tonias said.

He says many of the items in the church are old and carry a lot of sentimental value but may not be worth what the thief thinks they are.

“Some of these items are very old so the gold plating has worn off and things like that. It’s not like it’s a relic or anything like that,” he said.

“We’re looking at everything. It’s a sign of the times. People are stealing everything,” said Lt. Michael Lawn of the Watertown police.