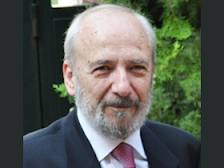 “It is impossible to speak exclusively for the unity of the church and be indifferent about the unity of humankind,” said Dr Petros Vassiliadis, at an academic gathering held in his honour in Thessaloniki, Greece.

Vassiliadis, a Greek Orthodox theologian and formerly a representative of the Church of Greece on the World Council of Churches (WCC) Commission for World Mission and Evangelism (CWME), called for a broader understanding of ecumenical dialogue.

The symposium was entitled ‘Ecumenical dialogue in the 21st century: Realities, challenges and perspectives’. It was organised in Vassiliadis’ honour by the theology department of the Aristotle University of Thessaloniki from 14 to 15 January 2013, as he retired recently and became an emeritus professor.

An “informed” understanding of the “theology of religions” and a “new understanding of Christian witness as the ministry of reconciliation” together with a “practical ecological sensitivity”, he said, is needed for the preservation of the environment.

Vassiliadis said these perspectives are important for the ecumenical movement “while promoting and safeguarding a Declaration of Human Duties and Responsibilities (alongside human rights)”. He stressed the significance of responding to the challenges of the global economy from a Christian viewpoint.

The WCC General Secretary, the Rev Dr Olav Fykse Tveit in his message expressed “thanks to God” for Vassiliadis’ academic career extending over many years and paid tribute to his “fruitful ecclesial and ecumenical ministry”.

“We are all indebted for your contagious enthusiasm for inter-Christian and inter-religious relations, your creative participation in any form of dialogue,” said Tveit.

“You have made significant contributions to the global ecumenical movement through your involvement with the WCC for the last three decades. And I am fully confident that you will continue making contributions in the coming years,” he added.

Currently a professor of biblical studies at the Aristotle University of Thessaloniki, Vassiliadis also served as president of the World Conference of the Association of Theological Institutions. He was deeply involved with the WCC’s world mission conferences held in Greece and the United States, and with the WCC 8th Assembly in Harare, Zimbabwe.

He also contributed to the new mission statement issued by the Commission on World Mission and Evangelism (CWME) in 2012.

The symposium also gathered some of the Greek Orthodox participants active in the ecumenical movement. These included Fr George Tsetsis, former representative of the Ecumenical Patriarchate at the WCC offices in Geneva, Switzerland.

Among other participants were Dr Alexander K. Papaderos, co-founder of the Orthodox Academy of Crete in Greece and member of the European Academy of Sciences and Arts, and Prof. Dr Grigorios Larentzakis, director of the Eastern Orthodox theology department at the University of Graz in Austria.

The symposium was well attended. Young speakers were included among the participants adding to Orthodox theological reflections on issues of ecumenical concern.

The World Council of Churches promotes Christian unity and works for a just and peaceful world. An ecumenical fellowship of churches founded in 1948, today the WCC brings together 349 Protestant, Orthodox, Anglican and other churches representing more than 560 million Christians in over 110 countries, and works cooperatively with the Catholic Church.