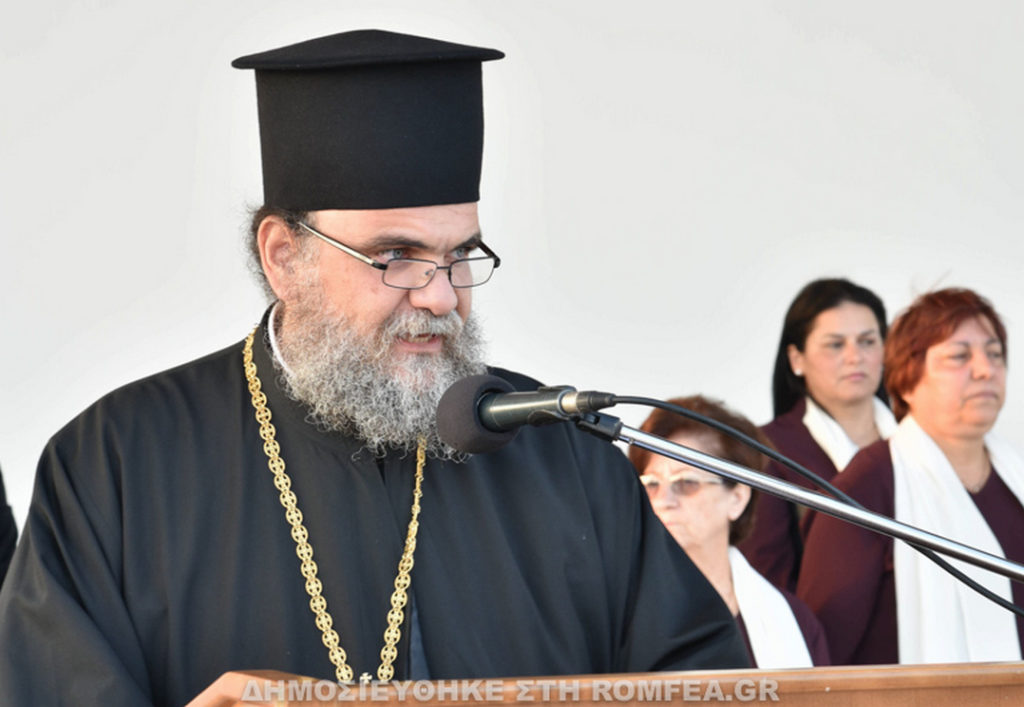 [KIEV – June 26, 2019] Just as His Beatitude Archbishop Chrysostomos of New Justiniana and All Cyprus has taken the initiative to try to resolve the crisis in Ukraine, so the Cypriot Church is taking the initiative to legally defend the suffering clergy and faithful of the canonical Ukrainian Church.

The Church has launched the collection of signatures in Europe to file a lawsuit in the European Court of Human Rights in support of the Church led by His Beatitude Metropolitan Onuphry of Kiev and All Ukraine, His Eminence Metropolitan Isaiah of Tamasos said during events in Kiev yesterday in honor of the 5th anniversary of Met. Onuphry’s enthronement as primate, reports the Ukrainian Church’s Department for External Church Relations.

Met. Isaiah was just one of many hierarchs who spoke in defense of Met. Onuphry and the canonical Church during the celebrations.

“We, for our part, are continuing our struggle and are beginning to collect signatures from all over Europe to appeal to the European Court of Human Rights to restore justice,” Met. Isaiah explained in his address to President Vladimir Zelensky and the Ukrainian government read out following the Divine Liturgy.

“Thousands of Orthodox Ukrainian citizens have been expelled from their churches and are experiencing persecution and violence from their fellow citizens. We in world Orthodoxy and especially the European Orthodox peoples are very concerned about these violations of religious human rights that are happening in Ukraine against our brothers.”

More than 200 parishes have been illegally forced into the schismatic “Orthodox Church of Ukraine” (OCU) since January. While the OCU primate, “Metropolitan” Epiphany Dumenko, continues to lie about this reality, proclaiming that all the parishes have voluntarily transferred out of love, Simeon Shostatsky, the former canonical hierarch of Vinnitsa who joined the schismatic structure in December, has acknowledged that churches are indeed being seized from the canonical Church and that the canonical faithful are right to defend their holy sites.

The Cypriot Church protests these persecutions against the canonical Ukrainian Church together with millions of Orthodox Christians around the world, Met. Isaiah added in his address. “We are all members of the one Body of Christ our God. And when one member of the body hurts, all the members of this body experience pain,” the Cypriot hierarch said.

Such violations in a state that considers itself democratic, like Ukraine, should be impossible, Met. Isaiah said, thus calling on the President “to hear our voice and correct this injustice. Let all churches be returned back to their legitimate Orthodox owners and let everyone serve his God in the spirit of freedom and respect for human rights, without interfering in the faith of another.”

He also expressed confidence that President Zelensky, as “a democratic person who loves his people, will do everything that is right and just for Ukrainians to see their president as a father and defender of their rights.”

Met. Isaiah was also in Kiev in July 2017 for the feast of St. Anthony of the Kiev Caves. He expressed the same sentiment at that time, saying: “The Body of Christ is one, and whoever is connected with the body of Christ, is connected with Him. I have to say—whoever is in union and unity with the Ukrainian Orthodox Church is in union with us. This is the only canonical Church in Ukraine.”

An address from His Eminence Metropolitan Nikiforos of Kykkos, also of the Cypriot Church, to Met. Onuphry was also read out during the celebrations. He wished His Beatitude many years and diligence in serving the Ukrainian flock during these present difficult times and emphasized that the granting of autocephaly must not be a unilateral action by anyone Local Church, accomplished by non-canonical means.

In a statement published earlier in February, Met. Nikiforos lamented the rushed manner in which the new Ukrainian church was created and granted autocephaly and declared that it is impossible to have communion with unordained schismatics. He further pointed out that Patriarch Bartholomew had once promised not to do precisely what he did in Ukraine—recognizing the Ukrainian schismatics and unilaterally granting them autocephaly.