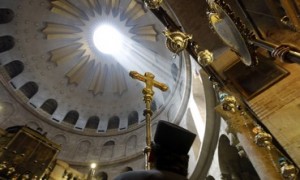 This week the Greek Orthodox Patriarchate of Jerusalem, which has extensive and valuable property holdings in the Holy Land and maintains a headquarters in the ancient church, had its bank account frozen, said an official at water company Hagihon.

A report in Ma’ariv on Friday said the Patriarchate was threatening to shut the doors of the church, which is a major pilgrimage site for millions of tourists.

The church lies deep inside the Old City walls. It encompasses Golgotha, or Calvary, where Jesus is believed to have been crucified and the tomb where he was buried and resurrected.

A church was first built there in the 4th century under Constantine the Great, the first Christian Roman emperor, whose mother, Queen Helena, had visited the site and identified it as the place of Jesus’ resurrection.

The General Secretary of the Patriarchate, Archbishop of Constantina Aristarchos, had no comment on the Ma’ariv report. He said the church was willing to pay water bills from now on, but that the accumulated debt, stemming back years, would be problematic.

“We trust God and hope that people will help us,” he said, adding that the Patriarchate has sent letters to President Shimon Peres and Prime Minister Binyamin Netanyahu.

Ma’ariv said that for decades there had been a tacit agreement between the church and former Jerusalem mayor Teddy Kollek, exempting the Patriarchate from paying for water piped to the Church of the Holy Sepulcher.

A spokesman for Hagihon, however, said the law did not permit the company to make such exemptions.

Talks with the Patriarchate have been going on for years, he said. The company had refrained from taking lawful enforcement steps, such as shutting the water off at the church, in order not to disrupt prayers and tourist activity at the site.