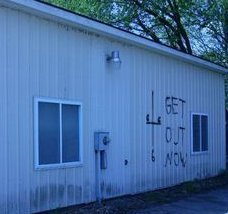 Some of the damage at Holy Cross Antiochian Orthodox Church in Allegan County after vandals trashed parts of the exterior on Monday, May 6.

DORR, MI — After his Holy Cross Antiochian Orthodox Church was vandalized for the second time in six months, the Rev. Gregory Hogg was able to find solace in the misdeeds of others.

“Because the Bible says that after doing good, we will suffer evil,” Hogg said on Tuesday, May 7, the day he learned that unknown suspects had defaced the church.

A parishoner called Hogg, who resides in Byron Center, to tell him the church had been hit again, the pastor said. When he arrived he saw a two upside-down crosses, and spray-painted graffiti that included a profanity and the message “get out of here” painted in the outside walls of the building.

“I have no idea who they are. We know some of the neighbors in Dorr and they are very nice people,” he said, adding that the nearby St. Stanislaus Parish was damaged as well.

On Dec. 11, 2012, a thief allegedly broke in by smashing a small hole through the glass of a back window of the church, at 1928 142nd Ave., nabbing a random assortment of items.

After seeing the graffiti display, Hogg called the police and filed a report. He doesn’t know what will come out of it because he doesn’t believe there was evidence left behind.

“We just know we are praying for them. We don’t know who it can be because we have no problems and no enemies,” said Hogg.

Hogg and church members have already painted over the graffiti.