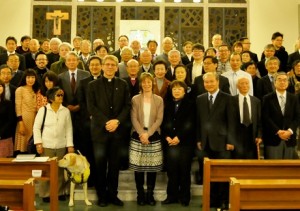 From the World Council Churches

“Churches in Japan are true witnesses of Jesus Christ through their words and deeds. Their strength even in a minority situation is impressive. Their voices in critical times are significant for Japan, paving a way towards justice and peace,” said the Revd Dr Olav Fykse Tveit, general secretary of the World Council of Churches (WCC) during his visit to member churches of the WCC in Japan.

Tveit went on to say that the WCC needs its member churches in Japan as a “voice of truth”. He said their engagement and contributions to the ecumenical movement are crucial.

The WCC general secretary was in Japan from 3 to 10 December.

In his sermon at the Nara Anglican Church, Tveit said, “As fellow pilgrims on the pilgrimage of justice and peace, Christians in the Anglican and Catholic churches in Japan have defined their mission and ministry together to be kyo-ho-sei (walking together),” Tveit said.

In his meeting with the leaders of the Korean Christian Church in Japan, Tveit listened to their concerns over the rise in hate speech directed against the Koreans in Japan. He observed the irony that the right to freedom of speech was being abused and misused by the majority to oppress the minority, undermining democratic values.

“The visit from the WCC general secretary was a source of encouragement for us,” said Rev. Dr Renta Nishihara, WCC Central Committee member from Japan. “Japanese churches are surely minority and we sometimes feel a sense of separation. However we are connected with the fellowship of global churches through the WCC, and we are not alone!”

The WCC general secretary also visited Sendai, a city devastated by the earthquake and subsequent tsunami which claimed more than 2,000 lives. Visiting temporary shelters for displaced families who lost homes to the tsunami, Tveit spoke with the residents and listened to their stories of trauma and concern for the future.

Tveit also attended a meeting hosted by the Emmaus Centre operated by the United Church of Christ in Japan (UCCJ). He heard of how Christian organizations are responding to the dangers of radiation contamination from the Fukushima Daiichi nuclear reactor. Tveit encouraged the churches to strengthen their advocacy in raising the awareness of the dangers of nuclear energy, taking practical steps toward creating a nuclear free world.

Tveit also met with Metropolitan Daniel (Nushiro) of All Japan and visited the Holy Resurrection Cathedral (Nikolaido). The WCC general secretary expressed his gratitude for the participation of the Orthodox Church in Japan at the WCC Busan Assembly in 2013. He shared his hopes that the Orthodox Church in Japan will continue to enlarge its ecumenical engagement with Christian churches in Japan as well as with the WCC.

The meetings with member churches in Japan culminated in a visit to the Anglican Church in Japan (Nippon Sei Ko Kai) where Tveit met with Archbishop Nathaniel Uematsu, who expressed his appreciation for the WCC’s statements on Article 9 of the Japanese constitution, a nuclear free world and calling for justice for the “comfort women” forced into sexual slavery by the Japanese Imperial Army before and during World War II.

While in Japan, Tveit participated in the 4th Global Inter-religious Conference, where he expressed concern at the Japanese government’s initiative to reinterpret or change Article 9 of the Japanese constitution. Adopted as part of the constitution in 1947, following the Second World War, the clause outlaws war as a means for Japan to resolve international disputes.