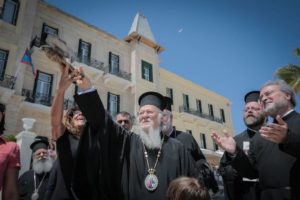 BOARD THE SHIP MORE SPACIOUS THAN THE HEAVENS — Off the island of Spetses, the leader of 300 million Christians worldwide told a group of nearly 200 religious leaders, academics and activists that they needed to move beyond intellectualism when it came to the environment.

“What remains for us is to preach what we practice,” said Orthodox Ecumenical Patriarch Bartholomew I of Constantinople. “Now we must begin the long and difficult way from the mind to the heart . . . May God guide you in your service to his people and the care of his creation.”

The environment has defined 78-year-old Bartholomew’s tenure for more than a quarter-century: The gathering at sea this month was the ninth he has organized since the ­mid-1990s. This one focused on Attica, the peninsula surrounding Athens that juts out into the Aegean Sea, and Bartholomew brought together scientists and clergy to examine the state of bodies of water including the Danube and Amazon rivers, the Baltic and Adriatic seas, and the Arctic Ocean.

In November 1997, he had delivered an address in Santa Barbara, Calif., where he officially classified crimes against the natural world as sins.

“For humans to cause species to become extinct and to destroy the biological diversity of God’s creation; for humans to degrade the integrity of Earth by causing changes in its climate, by stripping the Earth of its natural forests, or destroying its wetlands; for humans to injure other humans with disease, for humans to contaminate the Earth’s waters, its land, its air, and its life, with poisonous substances,” he told a crowd that included ­then-Interior Secretary Bruce Babbitt. “These are sins.”

Pope Francis has likewise drawn global attention to environmental activism: On the same day Bartholomew was concluding his conference in Greece, the pope brought the leaders of multinational energy and investment firms to the Vatican to discuss the path forward on climate change.

At a time when some political leaders have become more cautious about — or have outright rejected — policies aimed at curbing greenhouse gas emissions, several major faith leaders are making environmental care a top spiritual priority.

But they have also struggled to inspire some of their congregants to action.

“Even when there’s a will, there is not always a willingness to act,” said Ni­ger­ian Cardinal John Olorunfemi Onaiyekan, one of two cardinals who traveled to the patriarch’s conference. “The spirit is willing, but very often, the flesh is weak.”

Still, Onaiyekan and others who had journeyed to Greece for the three-day “Green Attica” conference emphasized that they would persist in raising the moral and ethical dimensions of climate change.

In Nigeria, Onaiyekan said in an interview that “there is a kind of ambiguity about climate change” because it is “a nation largely dependent on oil revenue.” But those living on the Niger Delta have experienced the damage associated with oil production firsthand, he said. It would be naive, he said, to expect oil companies and governments to shift their practices on their own.

“If you are waiting for them to change, you will wait till Jesus comes back again,” he said. “We feel the only area where we can actually make an impact is to constantly keep challenging our leaders to stop killing us. Stop killing your people.”

Francis — who issued the first papal encyclical focused solely on the environment, “Laudato Sì,” in 2015 — pressed this message during his private audience this month with executives from ExxonMobil, Eni, BP, Royal Dutch Shell, Equinor and Pemex.

Calling climate change “a challenge of epochal proportions,” the pope said that the private sector had taken modest steps toward incorporating climate risks into its business models and funding renewable energy.

“Progress has indeed been made,” he told the group as he wrapped up the two-day session. “But is it enough?”

Former energy secretary Ernest Moniz, who attended the meeting, said in an interview that participants discussed “the moral and ethical dimensions” of climate change, as well as ways to shift to a low-carbon path.

“Everybody was there trying to find a way to go forward,” Moniz said.

The patriarch, who resides in Istanbul, has spent years bringing together unlikely allies while also seeking to reorient the Orthodox Church. In 1989, his predecessor, Patriarch Dimitrios I, designated Sept. 1 as a day of prayer for the welfare of all creation, and Bartholomew has expanded upon this initiative.

Jane Lubchenco, who headed the National Oceanic and Atmospheric Administration during Barack Obama’s administration and served as the scientific co-chair of most of these conferences, said the patriarch had worked to “position the Orthodox Church as a very stewardship-focused religion.”

Back in 1995, she recalled, he convened a meeting on the meaning of the apocalypse in the modern world, to commemorate the 1,900th anniversary of the Book of Revelation. In that context, Lubchenco said, Bartholomew warned that the apocalypse could be underway if humans did not reassess their impact on the Earth.

This month’s gathering — which included stops on the islands of Spetses and Hydra — included similarly dire warnings from researchers. Hans Joachim Schellnhuber, who directs the Potsdam Institute for Climate Impact Research, described the current changes arising from fossil-fuel burning as “disruption on a global scale.”

Without a sharp reduction in greenhouse gas emissions, Schellnhuber told the audience, large swaths of Nigeria, the Philippines and elsewhere “will become uninhabitable” because they will be too hot for humans to live in.

Some of the most fiery rhetoric came from Columbia University Earth Institute director Jeffrey Sachs, who spoke to the group in Greece before departing for the Vatican to participate in the papal climate conference. In an impassioned speech, Sachs charted the historic development of the global capitalist economy, arguing that its foundation upon the idea of “limited liability” has meant that corporations will not take responsibility for the economic damage they have caused.

“What we’ve proved is greed unleashed has no boundaries at all,” Sachs said. “That is the modern economy: Unleash the greed.”

The patriarch, who sat in the front row for the entirety of the conference, opened and closed the proceedings. Speaking in English, he framed conservation as a cause inextricably linked to both his faith and the broader cause of social justice.

“Any kind of alienation between human beings and nature is a distortion of Christian theology and anthropology,” he said.

Even small details of Bartholomew’s itinerary carried symbolic significance. His top environmental adviser, the Rev. John Chryssavgis, asked the conference hotels to avoid plastic straws and nixed a planned blessing for Hydra’s fishing fleet that was sponsored by an oil company.

With his free-flowing white beard and braided ponytail — high-ranking Orthodox officials eschew haircuts on the grounds that the practice smacks of vanity — the patriarch stirred an outpouring of affection as he visited two small islands during his tour. Church bells pealed as his yacht came into the islands’ harbors, and local residents thronged him as he made his way into town.

But it is unclear whether that reverence has translated into an embrace of his environmental mission, especially in the United States. The Rev. Terence Baz, an Orthodox priest in Clifton, N.J., said his parishioners are “blue-collar workers, mostly Republican.”

He added that many conservatives from the Episcopal Church and other Protestant sects have recently switched to the Orthodox Church in search of a more tradition-bound faith, “So there is a resistance against recognizing the reality of what is going to come.”

Chryssavgis said the patriarch has plans to “reach out to parishes in a more systematic fashion” on environmental issues through the church hierarchy but added that “it’s a real struggle.”

American religious conservatives such as E. Calvin Beisner, founder of the Cornwall Alliance for the Stewardship of Creation, wrote in an email that “many Roman Catholics, Eastern Orthodox, and Protestants” share his skepticism of the idea that burning fossil fuels will cause major environmental damage.

“The abundant, affordable, reliable energy generated from fossil fuels has been indispensable to lifting and keeping whole societies out of poverty,” he said, adding that these benefits “far outweigh their costs, whether to individuals, to specific nations or regions, or to the entire world.”

But as the hydrofoil cruised toward Athens, the bishop of Salisbury, Nick Holtam, said leaders such as Bartholomew and Francis can bolster policymakers’ convictions.

“Churches don’t look like campaigning organizations,” Holtam said, but when it comes to politicians, “they do need the legitimacy of people who will support them in doing hard things.”

Magda Jean-Louis contributed to this report.