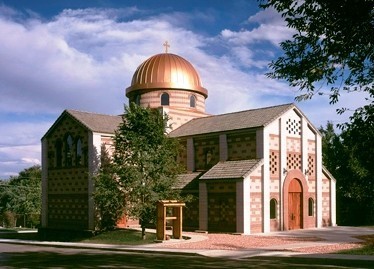 COLORADO SPRINGS, CO [OCA] – In the midst of what Colorado officials described on Thursday, June 13, 2013 as “the most destructive fire in state history,” Archpriest Anthony Karbo and the faithful of Saints Constantine and Helen/Holy Theophany Church here once again are requesting prayers, nearly one year to the day after they faced the Waldo Canyon fire.

What has been dubbed the “Black Forest fire” has already destroyed nearly 16,000 acres, displaced some 38,000 residents, and affected about 13,000 homes—nearly 400 of which have been destroyed. Much of Colorado Springs has been evacuated, while estimates on containment inched upward to a mere five percent as of Thursday night.

“It’s been really hard to get solid information, as the fire is an on-going, unfolding reality,” Father Anthony told the OCA web team on Thursday evening. “We have about a dozen parish members living in and around the area of Black Forest, in addition to others who consider us their parish home but are not ‘directly’ tied to overall parish life.

“At least two families fear that their homes are completely gone, although there is no official confirmation at this point in either case,” Father Anthony continued. “The families remain anxious, hoping the best but fearing the worst. The rest are under mandatory evacuation from their homes. Today was another particularly dry, hot, and very windy day and, without an ‘official accurate’ count of lost homes, additional losses are assumed and expected.”

Affected parishioners are safe and accounted for, having found shelter with families and friends. Yet uncertainly abounds.

“Just as they think they have things under control, the fire changes direction due to shifting winds, to the point of burning back on itself consuming unspent fuel,” Father Anthony added. “Watching from nearly any vantage point in Colorado Springs one regularly can observe large plumes of black smoke that suddenly burst into the sky, indicating that another home has been lost.”

He added that the parish’s buildings and property are not in immediate danger, “unlike last year’s fire.” [See related story posted in June 2012.]

“We are waiting, watching, praying—with special petitions added at all the services for God’s mercy, compassion, and grace upon those suffering loss and for the sending of ‘favorable weather’ in the form of rain,” Father Anthony continued. “We are in the midst of a long-term drought that began at the time of last year’s fires and continued through what was one of the driest winters on record.

“Parishioners have opened their homes, rooms, and other resources to those affected,” he said. “Affected families are in good spirits despite the circumstances, trusting God, gaining what is most important in life in being forced to ‘lay aside all earthly cares’ while recognizing that the body is more than ‘raiment’ and that life embraces more that ‘where we shall live.’ As this is the second painfully devastating fire in less than one year, it makes me ponder on the ‘righteous chastisement of God’—referenced in our Lityas—and, by extension, what it all means to be good stewards of the earth, not merely consumers of it for selfish pleasure with bigger and bigger houses in riskier and riskier areas… filled with endless ‘stuff’ necessitating ‘bigger barns’ in which to store it all. It just makes one wonder.”

Ongoing prayers are “the best thing others can offer us at this point,” Father Anthony concluded, adding that his biggest hope is “that we will learn from God in it all—and offer a ‘good repentance’ on our part. My biggest fear is that we will not do this.”